At first glance, the Montreal Impact’s decision to play next Tuesday’s home game against the Vancouver Whitecaps with up to 250 fans in the stands at Stade Saputo isn’t overly problematic.

But the worry for some in Canada’s medical community is whether the decision announced on Thursday represents the tip of a much bigger iceberg as it pertains to controlling the possible spread or further outbreaks of COVID-19.

“That event in and of itself, that doesn’t sound like it’s going to cause any problems for anybody,” said Colin Furness, an infection-control specialist and assistant professor at the University of Toronto.

“But if it’s used then as a toehold to do much more, well, we’re just about to head into flu season. We can get away with a lot right now, they could probably do a lot more than 250 and not have a single case. But it’s going to be October soon and that’s when case counts are going to go way up.”

The revamped Major League Soccer regular-season schedule will play through to Nov. 8, with 18 teams qualifying for the playoffs. The MLS Cup has been scheduled for Dec. 12.

Next Tuesday’s game will be Montreal’s first since it bowed out of the MLS Is Back tournament, at the ESPN Wide World of Sports, in the last 16 last month.

“The timing is a little bit worrisome,” Furness said. “If this is just an edge of a long wedge of having larger and larger gatherings, I would rather they wait until next spring, that’s for sure.”

Montreal president Kevin Gilmore said the club is taking every precaution in preparing for the re-entry of fans to a sports event, the first Canadian pro team to open its doors since the coronavirus pandemic erupted in March. FC Dallas had almost 3,000 fans in attendance last week for its game against Nashville SC in Frisco, Tex., a move that hit the headlines for some of those fans booing players who took a knee during the U.S. national anthem.

In Montreal, masks will be mandatory, as will physical distancing for fans not from the same household, temperature checks upon entry and cashless transactions for food and beverage items.

Gilmore said that the team could have accommodated more than 250 people, but ultimately decided in conversations with the Quebec health authorities to limit capacity, seated across five sections in the south stand of the stadium.

“Obviously we want to bring as many people as we can safely into the venue,” he said. “We’ve worked over a couple of models and are confident we can achieve that, but obviously we have to work with the province.”

Montreal admits it will be taking a financial hit to allow such a small number of fans into the stadium, which regularly seats 19,619 for soccer games. That will cover the cost of bringing in staff to monitor lineups for food and beverage sales, as well as for the use of the washrooms, in addition to providing sanitizing stations at all stadium entrances.

But with the prospect of nine home games in total in the rejigged MLS calendar, the Impact president felt it was important to get health-and-safety protocols established.

And while 250 is barely enough to make a dent in the full capacity of the stadium, Gilmore hopes the fans bring their singing voices.

“So we just hope that the 250 people we get in here are the loudest people we can find.”

But while soccer fans are well known across the globe for their loud, vocal support when attending games, that might not be the most advisable course of action in the current climate.

Prabhat Jha, professor of global health in the faculty of medicine at the University of Toronto, says that singing and shouting have been associated with transmitting respiratory viruses, although he does add that most of that research has been drawn from indoor sports venues such as hockey arenas.

“So if they are polite Canadian fans that will wear the masks, that will help,” Jha said.

Much like Furness, Jha thinks that the chances of infection are low right now, and is in favour of trying to return society to normal as quickly as possible.

However, he suggested that the Impact look at working with the Quebec health authorities to set up a testing van outside Stade Saputo, and while it wouldn’t be practical to make it mandatory, the team could at least encourage some fans to get tested.

One action that should be mandatory, he added, is that every fan in attendance should download and use the federal government’s contact-tracing app.

Greater Montreal reported 33 new cases of COVID-19 on Thursday, while the city has had 29,515 cases in total since the pandemic began.

“If that is low or no, then it’s pretty hard to object to some basic kinds of social activities, especially outside, especially with all those precautions, that will allow us to start to embrace normal life.” 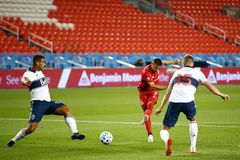 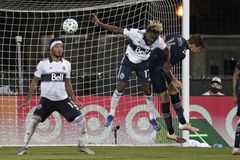 Canadian MLS teams to resume season on Aug. 18 with matches against each other
August 13, 2020 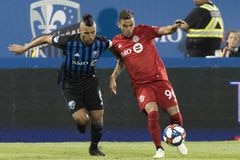