There are very few good things about a pandemic, but one of them is live interviews broadcast from the homes of famous people.

Not the interviews. Those are terrible. Nobody knows what they’re talking about, but the only television that can currently be made is people talking about things they don’t know.

What’s good about them is the “seeing inside the houses” part. Here’s something we didn’t know about the rich – they have no taste whatsoever. Some of these homes are shocking in their banality.

The other day, Ron MacLean had one of these home-studio chats with NHL commissioner Gary Bettman. Each man was propped in front of a laptop in their comfiest “I haven’t given up yet” outfit.

Though this wasn’t meant to be a fight, whatever it was was unfair.

MacLean has the advantage of understanding how television works. The camera was angled above him, lengthening him. The lighting was soft. He did the interview whilst sitting in a book-lined study. Hundreds of volumes, like he’s Jorge Luis Borges or something.

Bettman may be a competent administrator, but he’s not a visuals person. He was wearing pink, which isn’t his colour. He was staring down into the camera, making him look Lilliputian. He was lit from behind, like a Bond villain.

Also, Bettman appears to be living in a one-bedroom suite at the Courtyard Marriott in Cleveland. Why hockey’s top man would be living in a Marriott – and not even a full-service one – is beyond me, but I know those curtains. I have stared forlornly through those curtains for hours and hours.

Without the background of an arena or a news conference reinforcing Bettman’s authority, you found yourself less inclined to buy what he’s been selling. And this was before he started talking.

As with every other league, the NHL is trying to figure out how to bootstrap hockey back into existence. These schemes sound more loosey-goosey by the day. Maybe they can do it in the more godforsaken parts of the Midwest? Or maybe they can do it at the North Pole, like Santa?

While insisting that nothing has been decided, Bettman is on a media push to see how his decisions are going over.

The highlight is the league’s determination not to give up on the current season. If done in proper order, that would mean there’s about 3 1/2 months of 2019-20 hockey still to be played, including hurry-up training camps.

If that started tomorrow – which it won’t – that would take us into August, butting the NHL up against the start of the next season.

According to Bettman, the NHL is scouting around for as many as four locations across the continent that would become hockey bubbles. That would mean seven or eight teams per city, playing as many as three games a day on the same rink, inside a quarantine ring of steel.

What happens when you turn hockey players into indentured servants, then pen them up together for several months? “Violence” is my first guess.

This can’t be anyone’s idea of a good time, but so far there are no dissenters.

The NHL can’t afford to stop operations until everything is back to normal, because it’s possible we’re already at normal.

If so, this isn’t a normal anyone likes – what with the president of the United States wondering if it’s a good idea to try shoving a halogen lightbulb down your throat for disinfectant purposes.

But it’s the normal we’ve got.

Resuming play would allow hockey to begin churning cash again. The league could fulfill its TV contracts. Players could rescue some of their own money from escrow.

Whatever happens, everyone involved is taking a financial bath. But this is the difference between fully submerged for a year and just wet all over.

You can see the various leagues trying to talk these schemes into existence. It’s not a bad strategy.

If you say something often enough, to as many people as possible, even the most bonkers ideas begin to sound sensible. In another couple of weeks, the players will be volunteering to play four times a day at the Sing Sing Ice Palace and sleep in cells between games.

During one of these interviews, Bettman stumbled on a formulation that sums up the league’s new approach – “We don’t live in a world of perfect any more.” He’s been regularly deploying it since.

Well, nobody ever lived in that world. Only someone who makes several million bucks a year thought the old world was perfect.

What Bettman’s talking about is instead a world of fair. We are no longer living in a world in which, first and foremost, everything must be seen to be fair (even if it isn’t).

Sports is a lab rat in this global social experiment. Shorn of its schedules and rituals, what does fair look like now? What sorts of compromises on fairness will it make to survive?

Just about any sort is my suggestion.

The NHL’s (and MLB’s and NBA’s) new, make-it-up-as-you-go-along format guarantees that someone is getting jobbed in the end.

Whether it’s through the timing of the draft, or the manner in which games are scheduled, or a rejigged playoff format, someone will be hard done by. Fortunes that were promised will be lost. Everything that results will have an asterisk next to it. Everyone involved will have to put up with twice as much to get things done half as well.

Just like those shabby at-home TV interviews, we’re all suddenly living new DIY lives. Everything has been reduced to muddling through today. Plus, it’s getting harder and harder to say what day today is.

Who knows what things will look like in a year. Maybe better. Probably worse. Either way, we will keep trudging forward.

In those circumstances, we are beyond best-case scenarios. Instead, we have arrived at the stage of scenarios, full stop.

The goal isn’t getting things back to perfect, or even to whatever we used to call normal. It’s getting them to somewhere, somehow for as long as this interregnum lasts.

Me, you, Gary Bettman, everyone. We’ll figure out how that works as we go along. 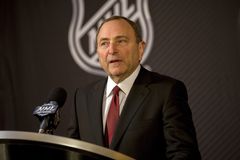 Bettman: NHL players in isolation while season is on hold
March 13, 2020 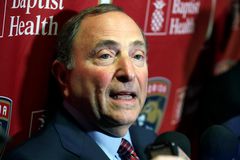 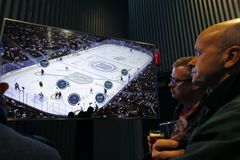