Canada will have just two women playing regularly on the LPGA Tour in 2020, down from five this year, as many of the country’s other top pros have stalled or regressed, fallen victim to injury or, in one case, quit the game altogether in a pique of despair.

The smaller contingent for 2020 is not a good sign for Canadian women’s golf at the highest level but people in the game are hoping it is more of an aberration than a trend that should be of concern.

“It looks overwhelming but it’s just one of those things," said Brittany Marchand, whose sophomore slump this year on the LPGA Tour relegated her to the second-tier Symetra Tour for 2020. “I don’t know what the reason really was for everyone to kind of go off the rails at the same time.”

Superstar Brooke Henderson and resurgent veteran Alena Sharp have easily kept their full-time playing cards for 2020. Henderson, 22, has won twice this season and posted 10 other top-10 results, while 38-year-old Sharp sat in a respectable 54th place on the tour’s money list heading into this week’s Toto Japan Classic, the penultimate event of the 2019 season.

That is Sharp’s highest finish since the peak season of her 15-year LPGA career, in 2016, when she ended the season in the 41st spot.

With the two of them playing so well and garnering so much attention, especially nine-time LPGA winner Henderson, the casual fan may not notice the struggles on Canada’s second rung of talent.

Marchand, Anne-Catherine Tanguay and Jaclyn Lee are among those coming off disappointing seasons. All LPGA regulars in 2019 and in the prime years of their 20s, they finished outside the top 100 on the money list and lost their full-time cards.

“I think this year was ... a little bit of an outlier," Marchand continued. "I feel like every year with Canadian golf, with women’s golf, we’ve been slowly improving. We’ve [been] getting more people on tour. There’s just been a lot of aspects that just kind of happened all in the same year.”

Marchand made two cuts in 17 starts as her efforts to improve her swing and distance backfired. She had to return to the LPGA’s qualifying school last month but didn’t advance far enough in the three-stage marathon to win back her card.

Meanwhile, Tanguay and Lee were set back by injuries.

Tanguay, who played regularly on the LPGA Tour in 2016 and 2018 as well, announced recently she’s taking next year off to recover from back and other ailments, tend to personal matters and “re-evaluate my priorities.”

Tanguay’s sabbatical also brings an end to her dream of representing Canada at the 2020 Olympics in Japan. Henderson and Sharp, Canada’s two highest-ranked players, now are locks for the two spots available. They also wore the Maple Leaf at the 2016 Games in Rio.

Lee has a shorter (and more certain) recovery target. She shut down her rookie season in the summer with a wrist injury but has resumed practising lightly and is expected to play in 2020. As with Marchand, she’s destined next year for the Symetra Tour, although she will be able to make five LPGA starts on a medical exemption.

“There are things you can control and things you can’t. From our perspective, to lose any player, never mind a bunch of them in one season, is not ideal,” said Tristan Mullally, head coach of the Canadian women’s national amateur team and the “young pro squad,” which comprises a handful of nascent professionals who show the most potential to reach or stay at golf’s highest levels.

He pointed out most of the players who’ve had setbacks grew up together as amateurs and moved into the pro ranks at roughly the same time. “When there’s a natural fall-off, it tends to also happen together.”

To boost the things it can control, Golf Canada is hiring two assistant coaches for the amateur and young pro squads to fortify player development and better support team members during the playing season, Mullally said.

Statistics provided by the LPGA Tour show there’s been an average of about eight Canadians a year with tour “membership” this century, with a high of 13 in 2000 and a low of five in 2015. While not all members get to play full-time on the tour because of their status (all tours have a pecking order of priority to get into events), the numbers still clearly show a weaker representation.

The ebb in the women’s game coincides with a surge on the men’s side. Nine Canadians teed it up on the PGA Tour in the 2019 season, believed to be a record for the country, and eight have status for 2020.

Marchand, Tanguay and Lee were among the six women on the young pro squad this year. As the three dropped off the LPGA Tour, no replacements stepped forward.

Former LPGA player Rebecca Lee-Bentham made a return to competitive golf after a hiatus of more than two years but she didn’t win her card at Q school. She’s Symetra bound.

Former amateur star Maddie Szeryk, a dual U.S.-Canadian citizen who plays under the Canadian flag, launched her pro career this year and was the country’s top performer on the Symetra Tour, reeling off four top-10 finishes and placing 19th on the money list.

Her success earned her a spot in the third stage of Q school, which wrapped up last Saturday in Florida, but she failed to secure one of the 45 LPGA cards for 2020 that were available. She’ll have to return to the Symetra next year.

Maude-Aimée LeBlanc was Canada’s other Symetra standout in 2019, finishing the season at 30th on the money list. But the veteran, at 30, has decided to pack it in rather than chase the LPGA Tour, where she played for much of this decade before losing her full-time playing privileges in 2018.

“Over time, I realized it wasn’t my dream and it didn’t make me happy even after good performances,” LeBlanc wrote on her Facebook page in announcing her retirement. “I didn’t like the person I was on the golf course and I’ve always wanted to do something more rewarding than hitting a little white ball.”

LeBlanc’s cri de coeur might symbolize the gloomy mood in some parts of Canadian women’s golf these days, but hope always springs eternal heading into an off-season, with a fresh new year ahead.

The upside of players dropping down is that the feeder Symetra Tour will be well stocked next year with pros who’ve tasted the LPGA (including Marchand, Lee and Lee-Bentham) as well as promising up-and-comers such as Szeryk and rookie pro Selena Costabile. Their goal will be to place in the top 10 on the money list and earn a promotion to the LPGA Tour for 2021.

“It’s still right there,” Szeryk said of Canada’s standing among golf countries. “There’s still a lot of Canadians on tour, quite a few on Symetra. So you never know how many will make it to LPGA [after] next year. I think we’ll encourage each other." 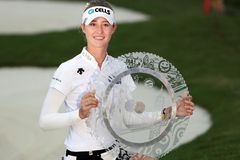 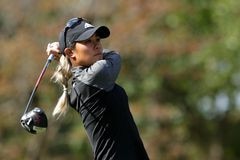 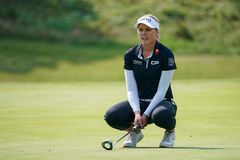