Ever since the schedule came out last November, Nicholas Mew has had April 18 marked on his calendar.

After falling in love with the Toronto Wolfpack during its inaugural season three years ago, he was excited at the prospect of the team’s first Super League game on Canadian soil and the chance to witness superstar Sonny Bill Williams in the flesh.

But because of the COVID-19 pandemic, Saturday’s scheduled home opener against Hull FC has been postponed indefinitely, Williams is holed up at home in England and Mew will have to keep his rugby jersey in the closet in Barrie, where he is an elementary school teacher.

Given the uncertainty cloaking the sports world, it’s likely to stay there for some time. While the team is hoping that games will resume, there is no guarantee they will take place on this side of the Atlantic. In the meantime, Mew, as with others among the Wolfpack faithful, sometimes wonders about the long-term financial viability of the club, with majority owner David Argyle footing most of the bill.

Already cut out of the Sky Sports television deal – which pays the other 11 Super League clubs £2.3-million ($4-million) each a season – the Wolfpack has not been afraid to splash out on the best talent in an effort to become a global brand. Williams, a former New Zealand All Black in 15-man rugby union, switched codes to 13-man rugby league by signing a two-year, $9-million contract in the off-season. And that contract is largely on top of the £2.1-million ($3.7-million) salary cap that each team must abide by.

“Some days I say to myself, you know what, if I was in [Argyle’s] his position I’d just say, ‘Yeah, that’s it, there’s too much against me here. I’m out,’” Mew says. “But on other times and other days I’d say, ‘No, you know, having seen his passion for the sport … I could see him wanting to stick it out.’”

While he may get some respite with the pay cuts that all Super League clubs are asking their players to take, Argyle is not only planning to stick it out, he’s planning for the long term. Asked whether Williams will still be here next year if there is no conclusion to the 2020 season, he not only answers in the affirmative, but adds that the club is already working on “other surprises.”

Despite the enforced break from game action, the Australian mining magnate is just as disappointed – if not more so – that the team wasn’t able to fulfill three community outreaches and rugby clinics in Barrie, the Niagara Region and Perth, Ont. While the Wolfpack may be what he is best known for in Canadian rugby circles, Argyle has a bigger agenda.

“Getting to Super League was part of that plan,” he says. “Getting Sonny Bill Williams, attracting other world-class talent to come to the club helps to achieve our objective of putting more rugby balls in kids’ hands and creating the platform that Toronto becomes a rugby centre of excellence.”

That’s a goal held by rugby fans across the province. Eric Perez, who co-founded the Wolfpack alongside Argyle, shares the same vision.

The Toronto native has been consumed by rugby league since he first saw a game in 2010. Now fronting up the relocation of the third-tier Hemel Stags from England to Ottawa, where the team will play as the Aces next year, Perez thinks Ontario has the potential to become a rugby league “hotbed” and the “pinnacle of rugby league and rugby in North America.”

With the pandemic throwing even the best-laid plans into disarray, Perez is somewhat thankful for the timing, given that he is trying to expand the game in a new market.

“I think that would have been devastating for us if we had started playing this year,” he says. “But because we didn’t, we’re also in a strong position going forward and it’s all systems go for 2021.”

Much like the Wolfpack, the Aces will hope to capture the hearts and minds of the Ottawa community, where they will be playing out of TD Place, the home of the Canadian Football League’s Ottawa Redblacks. As the club attempts to duplicate the Wolfpack’s rise from League 1 to Super League, Perez says he will be looking to persuade some football players to make the switch to rugby to help fill out his roster.

Ultimately, though, long-term viability for rugby in this country will begin at the grass-roots level, he says. But enthusiasm for the game here can be fuelled by the success of the professional teams, akin to how the Toronto Raptors have helped develop Canadian basketball.

“That can spark a massive revolution for rugby in general.”

As Argyle is fond of saying, “All rugby is good rugby,” and over in rugby union, the hopes in this country are every bit as bullish.

Despite the lack of games right now, the hype around the signing of Williams and the launch of the Wolfpack in Super League hasn’t hurt the 15-man version of the game.

“People are talking about rugby in circles and it’s being talked about more than probably ever before,” says Allen Vansen, the chief executive officer of Rugby Canada, the Canadian governing body for rugby union.

Case in point: Vansen says he often gets e-mails from well-wishers when the Wolfpack does something of note in rugby league. And though he has nothing to do with the Super League side, Vansen says he is only too happy to talk rugby and use the opportunity to explain the difference between the two codes.

Just as it did with the Wolfpack, the coronavirus shutdown has had an impact on rugby union in Canada. Not only did the Toronto Arrows of Major League Rugby see their 4-1 start go unrewarded when the 2020 season was abandoned, but the men’s sevens team had just won bronze at the recent Vancouver stop on the World Rugby Sevens Series.

“As we saw from our men’s team in Vancouver, they were really coming into their stride and had a breakout performance and had the wind in their sails, [which] I think they really needed going into Tokyo 2020,” Vansen says.

Both the men’s and women’s sevens squads had already qualified for the Olympics before the Games were pushed back a year last month. While the extra time will be welcome for some, for those at the end of their careers, holding on for another year is hard both physically and mentally, he adds.

At least Rugby Canada has avoided the fate of its counterpart south of the border, with USA Rugby declaring bankruptcy last month. The fact that the organization was able to squeeze in its sevens tournament right before the lockdown helps, with Vansen calculating that the event brings in $7-million in gross revenues annually. “That’s absolutely huge,” he says.

And even with the current dearth of events coming into what is normally rugby union’s busy season, with the organization usually playing host to eight to 11 international events each year, Vansen says Rugby Canada is in a different position to USA Rugby.

“We’ve been able to do some good modelling and take some pro-active measures to ensure the financial viability of Rugby Canada through this pandemic and to ensure the organization remains financially sound,” he says.

When the pandemic ends, there is also quiet optimism that rugby’s price point – the top ticket for the Wolfpack is $35, with the Arrows even less – could make it attractive for sports fans who have either been furloughed or lost their jobs.

That applies to the corporate side, too, where businesses might be forced to examine their sponsorships and season-tickets costs, and may no longer be able to justify an NHL package.

Mark Winokur, the Arrows’ general manager, who was previously the director of corporate sales at The Score TV network, says he saw exactly that after the financial crisis of 2008.

“If I can’t [keep my NHL tickets] could I do something in a Tier 2 sport where I get a much bigger bang for my buck and still stay in sports and justify that connection without breaking the bank?” he says.

But debating whether fans come back and how much they are prepared to pay is a subject for another day. For Argyle and the Wolfpack, even though their 0-6 start to life in the top tier of rugby league isn’t what they had hoped for, given the makeover of the squad in the off-season, it is exactly what head coach Brian McDermott had envisaged.

And with other business interests keeping him involved – the launch of a Wolfpack-branded line of sports-recovery products and dealing with other commercial partners interested in piggybacking on the Wolfpack’s global brand – Argyle is staying busy.

“We’ve got enormous challenges in front of us,” he says. “… We’ve gone from zero to being in Super League and we’ve got through to the next round in the Challenge Cup and I say, if the season starts, fantastic, if the data shows that it’s safe to start; if not then we build and prepare for 2021.” 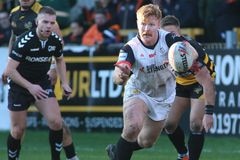 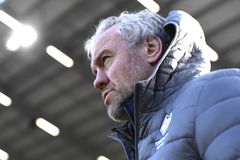