Zlatan Ibrahimovic is shy with expressing an opinion in the same way you are shy with breathing oxygen. You both need to do it in order to live.

Ibrahimovic is a soccer star so impressed with himself that when once asked what God thought of something, he replied, “You’re talking to him now”

Why James? Well, why not? That’s always been Ibrahimovic’s guiding principle.

“[James] is phenomenal at what he’s doing, but I don’t like when people have some kind of status, they go and do politics at the same time,” Ibrahimovic said in an interview. “Stay out of it. Just do what you do best because it doesn’t look good.”

I believe the technical term for this type of comment is “missiles away.”

As a general rule, you don’t find a lot of this sort of thing in pro sports. It’s not that athletes don’t bear grudges. They’ll happily maim each other on the field of play.

But they have a hands-off rule when it comes to offering comment on the life choices and public positions of other members of their tribe.

This detente is maintained through a policy of banality – everyone loves everyone else; no one has a public stand on anything. The only thing they need agree on is the class division that separates them from the people who pay to see them work.

One of the results of injecting a new political consciousness into professional sports is that that equilibrium becomes more difficult to maintain.

It hasn’t been very hard up until now. Is racism bad? Was Donald Trump off his rocker? Yes and yes. There was no problem forming a consensus around those ideas.

But once you inject external politics into any social group, it’s bound to get complicated. Eventually, it will get ugly. And then someone will ask Zlatan Ibrahimovic what he thinks about it.

This week, we saw this sort of complication ripple through the NHL.

Hockey has run screaming from the new politics. Not because it takes issue with anything being said, but because it can’t find a safe place from which to address it.

Every time the NHL tries to grapple with racial or social tensions in the United States, it gets it all wrong. Hockey is someone tone deaf trying to join a choir. Hockey would prefer everyone else do the singing while it nods along.

But there’s a whole big world out there just looking to cause trouble for anyone who likes talking power relations between individuals and their governments.

On Monday, New York Ranger Artemi Panarin caught it in the neck. Panarin is major Russian star. He’d started using that profile to (gently) push back against the Vladimir Putin regime from his perch in the United States.

Five years ago, it would be hard to imagine a hockey player doing anything like this. But the times they are a-changin’. Maybe that’s what emboldened Panarin to have an opinion out loud in public.

Unlike North American athletes, Russians actually risk something when they rip their government.

Panarin’s payback was a media hit job instigated by his former coach in the KHL. The coach, Andrei Nazarov, accused a then teenage Panarin of beating up an 18-year-old woman in a bar in Latvia 10 years ago, and then bribing his way out of it.

The story is full of holes, Nazarov is apparently famous for being a Putin-loving crank and Russia has a long history of doing this sort of thing to its wrong-thinkers, but none of that helps Panarin much.

More important, it’s a strong inducement to the next guy to keep his thoughts on social democracy to himself.

Panarin took a leave from the Rangers. The Rangers lined up behind their player.

Five years ago, that’s it. The story ends there. Which would probably suit Panarin just fine. The last thing he wants is people talking about something he says never happened.

But in the newly conscious sports world, any political disturbance requires an ideological postmortem.

That got people talking about hockey’s most famous Russian, Alex Ovechkin.

Ovechkin is a Putin supporter. It’s not as though he’s got the KGB logo tattooed on his neck, or talks about it all the time, but he hasn’t made a secret of his admiration.

Shouldn’t we be pressing him on that, some pundits asked. (No one really has.) Shouldn’t we be getting to the bottom of this whole which-Russian-stands-where-on-Putin issue?

Well, no. Absolutely not.

Athletes should feel as free as the rest of us to express their opinions and push their causes. It does not follow they will suffer no blowback for it. Anyone who wants to start talking politics at the dinner table should know they’re starting a fight. Nor does it follow that all athletes are opening themselves to interrogation about their political opinions.

Strictly for my own part, I’m not super interested in what a guy who throws a ball for a living thinks about pending legislation. But I understand that this is of more importance in America, since the sports industry is just about the only public institution that country has not completely lost faith in over the past 40 years.

America doesn’t have a widely trusted intellectual, administrative or political class. It has the guys it knows from the Nike commercials. So it’s up to those guys to say something.

In any case, this is not getting easier. It’s going to get a lot harder.

Sports was an escape, a consequence-free, reality-defying fantasyland open to anyone who wanted to live there.

Now that sports is relocating back to the real world, it’s starting to find out that move is not all cool protest T-shirts and applause from the gallery. Talking politics is a messy business. And it tends to get messier the more you talk about it. Opinion
There was a moment when the NHL’s outdoor game was a good idea. That moment has passed
Subscriber content
February 21, 2021 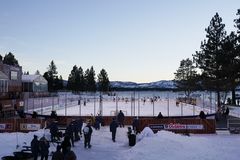 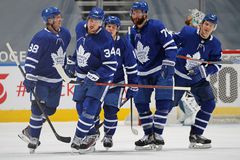