Before the loud and raucous Philly faithful, with Joel Embiid having a monster night, Kawhi Leonard could not do it alone.

Despite a 33-point night from the Toronto Raptors superstar, it was the Philadelphia 76ers – led by 33 points, 10 rebounds and five blocks from their dazzling Cameroonian All-Star -- who won the night 116-95. That gives Philly a 2-1 lead in the Eastern Conference semifinal playoff series – with Game 4 still to play on their home court.

Pascal Siakam would add 20 points on a rough 7-of-15 night. Danny Green had 13. Lowry, a Philly native playing in his hometown, gave the Raps just seven points on 2-of-10 shooting.

Jimmy Butler 22 points, JJ Redick 15, and Tobias 13 for the well-balance Sixers, who also out-rebounded the Raps 10-7.

“I think it starts with defence, they had two 30-point quarters in the first half,” said Leonard. We’re not going to win like that.”

The fans inside the Wells Fargo Centre were garbed in blue ‘Phila Unite’ playoff shirts. They were early arriving loud, on their feet, and chanting. On the court ringing the team’s pre-game ceremonial bell was former Toronto Maple Leaf -- now Philadelphia Flyer -- James Van Riemsdyk.

Embiid was so active, right off the tip. After guarding Siakam in Game 2, he was back on Marc Gasol this time, drawing the Spanish Raptor into an early foul. The Philly big man hit a step-back three, a layup, a couple free throws and delivered a monstrous block on Leonard – all in a brief but explosive few opening minutes.

Veteran Sixers bench player Mike Scott, who has missed the first two games of this series with a foot injury, received a hero’s welcome from the crowd as he made his return to the floor Thursday. The bandana-wearing reserve energized the place by hitting an early three.

Danny Green – who had hit just two of his 10 3-point shots so far in the first two games, went 3-for-3 from beyond the arc in the opening quarter, even as one Philly fan relentlessly heckled him. After the third bucket, Green pointed right at that fan.

Leonard, Green, and Siakam had nine apiece to end the quarter; and so did Embiid, who lead a long list of Sixers’ scorers. Philly lead 32-29

The 76ers played video footage of the 2001 Raptors-76ers series on the jumbotron, then panned to its star -- Allen Iverson -- sitting courtside. Philly’s famous Hall of Famer stood waving through a long and hearty ovation from the crowd, then hammed it up with a handful of Philadelphia Eagles players in the crowd.

Lowry was enraged at a no-call on Ben Simmons under the hoop. The two point guards got tangled up the basket, with both tripping and Simmons landing underneath, then appearing to reach up and cheap shot Lowry in the groin.

“It was an elbow. Refs didn’t call it,” said Lowry after. “It was nothing. He said he didn’t mean to do it. I’m not gonna dwell on something that wasn’t called. It is what it is. It’s not a big deal.”

The Sixers built a 10-point lead, punctuating it with crowd-thrilling moments like Simmons connecting on an alley-oop jam with Jimmy Butler or a JJ Redick three-ball. Embiid and Butler tapped their showmen-like qualities, reached out their arms and implored the crowd to take it from loud to thunderously intimidating.

Embiid’s other celebration would include flying like a plane and rocking the baby.

“For everybody that knows me, I need it. When I have fun, my game just changes,” said Embiid, who was wearing a hoodie with his now-famous brand ‘The Process’. “To get my game going, I’ve got to have fun on the court….The theatrics, I have to have it.”

The Raptors, who had held opponents to less than 100 points in six consecutive games, seemed unlikely to continue that streak, as they trailed 64-53 at half-time.

The Raps, trailing by as much as 18, then mounted a rallied to slice that in half – mostly thanks to the superstar Leonard, who exploded for a 14-point third quarter on perfect 6-of-6 shooting. There were other signs the Raps were invigorated: Lowry dishing a crafty pass to Siakam under the hoop, and Gasol manufacturing a steal that would zip up-court to Green, who hit Siakam for an alley-oop slam.

Toronto trailed by eight going into the final quarter.

The Sixers stole back the momentum quickly inside the fourth – with Leonard on the bench. More big Philly moments seemed to dull Toronto’s spirits. Embiid hit a three-ball and celebrated with a salsa-like shoulder shimmy. Minutes later, Siakam fell under the hoop, and seemed to reach out his leg and take his fellow Cameroonian to the ground too. The Raptor was given a Flagrant 1 foul.

A Sixers’ 11-0 run would do in the Raptors at that point. Embiid, with his huge moves and showy celebrations would enthrall the crowd until he finally left the game with four minutes left. His coach would later call him the 76ers’ “crown jewel”.

“We got thoroughly out-played and it’s been a while since you’ve seen this team play this way,” said Raptors Coach Nick Nurse. “The first adjustment we’re going to have to make is we’re going to have to play a helluva lot harder and play a helluva lot more physical. If we don’t do that, the prettiest things we decide to do offensively won’t matter.”

Game 4 is scheduled for Sunday in Philadelphia.

Jimmy Butler and the 76ers look to hold on to home-court advantage against Raptors
May 1, 2019 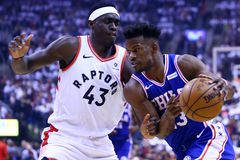