Over the weekend, Mark Geragos was talking up Colin Kaepernick’s chances of returning to the NFL.

“He is the most fit vegan I’ve ever seen in my life,” Geragos said. “To my somewhat trained eye, he looks like he’s ready to play.”

Geragos is one of those lawyers who earn their living putting a hand up the backs of troubled celebrities and making words come out. I’m not sure what part of that career makes him “somewhat trained” to evaluate NFL talent, but he sure sounds confident.

Kaepernick recently beat the NFL in his collusion lawsuit. At least, that’s the impression left by a settlement and a gagging order on all parties. Kaepernick fought city hall and won. Good for him.

The smart play would be to take his money and prestige and move on to the next phase of life. Instead, Kaepernick is trying to build a time machine and return to 2013.

The curious thing is why he would send his lawyer out to do his talking, and why that lawyer would then say such weird things.

The interview was done on CNN. It was occasionally unbearable. At one point, Geragos leaned toward host Ana Cabrera to announce the likeliest Kaepernick landing spot, said, “Carolina …”, and held out his hand waiting for Cabrera to answer, “Panthers.” When she did, Geragos said, “Very good!”

Cabrera turned directly to camera and gave the audience a bemused look. She should’ve punched him.

Later, Geragos described Kaepernick as “Gandhi-esque.” Sadly, we couldn’t see Cabrera’s face as he said it.

This level of hyperbole as it applies to multimillionaires discovering politics got tired a while ago. Yes, Kaepernick ought to be congratulated for the heedlessness and commitment of his kneeling protest. The NFL badly underestimated him and took a PR beating. With its breathless “Believe in Something” campaign, Nike gave him back a platform. Then the suit was settled.

The rebel forces won this battle decisively. But the war is another matter. The war and its winner – the game of football – was not at issue. That doesn’t seem to have seeped in to the Kaepernick camp.

Geragos was still going on and on. He could not resist putting his pull quote right at the end.

Cabrera, by now weary of this pedantry, said, “I gotta wrap it from here” and cut the interview off. She gave Geragos a look that suggested she was seriously considering throttling him. Now that would have been some good TV.

So Geragos is saying here that the New England Patriots may sign Kaepernick (within the next two weeks, according to him). The second bit is confusing. Whose former coach? Kaepernick’s or Kraft’s?

But for argument’s sake, let’s stick with the Patriots. Tom Brady and Bill Belichick are, if not exactly U.S. President Donald Trump pals, then Trump-adjacent. Kaepernick is sport’s most notorious conscientious objector.

That’s not the problem. Plenty of people who dislike each other can function as teammates when there is fame/ego/a paycheque to consider.

The problem is that the Patriots are run like a beehive. Brady is the queen. Everyone else is a worker. No one is allowed to be a bigger deal than Brady. If you try, you’re canned. This system works pretty well.

Whether or not he courted the attention, a re-employed Kaepernick would constitute the greatest distraction in the history of sport wherever he landed. Kaepernick on the Patriots would keep a thousand sports-writing monkeys churning out copy 24 hours a day for the next year. It would be complete madness.

Geragos is being sly here. To name-check Kraft – the NFL’s commissioner in all but title – gives the impression that all has been forgiven. Because the Patriots are renowned for buying low, it also gives the sense there is hidden value in Kaepernick. Both impressions would tend to goose the Kaepernick market. After a minute, everyone’s saying, ‘This is so crazy it just might work.’

Which of course it won’t. You can see that already. The most famous company man in all of sports being backed up by the most famous agitator? Great buddy comedy; bad NFL team.

The question everyone must first ask before they consider Kaepernick (assuming anyone does) is, Why?

Why would the Patriots pitch a big tent at Foxborough, Mass., and invite the circus to town in return for a No. 2 who has not played a competitive down in 2 1/2 years? Why would anyone?

Were he very, very good, owners could convince themselves that the hassle is worth it. But he isn’t any more. There is no world in which Kaepernick turns a bad team mediocre or a mediocre team good. In tactical terms, he’s meaningless. Therefore, there is no upside to hiring him.

You’ll get a few high fives on social media, then everyone will spend thousands of hours discussing whether Kaepernick will/won’t/should/shouldn’t kneel during the anthem in seven months time. Good luck selling that idea to a locker room.

In another league, somebody might have hired him purely for his publicity value, but this is the NFL. It doesn’t need publicity.

So instead you put Geragos on the networks to chuck up Hail Marys: ‘Bob Kraft is very interested’. And he told you this because? Try another one.

At some point in this Kaepernick journey, we’ve forgotten that sports are not fair and that things in them end unhappily more often than not. That’s why we enjoy them so much. 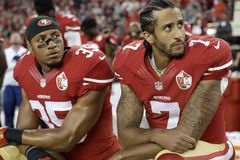 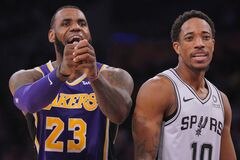 The most surprising twist in this NFL season? The league is fun again
Subscriber content
November 6, 2018 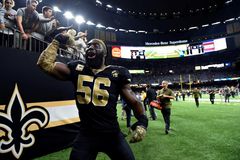