As the Toronto Raptors have flipped a 0-2 series disadvantage into a 3-2 lead over the Milwaukee Bucks in the Eastern Conference final, they’re also getting a master’s showcase from Kawhi Leonard the playmaker.

The Raptors superstar scored 35 points on 11-of-25 shooting from the field in Toronto’s heart-thumping Game 5 road victory on Thursday, 5-of-8 from three-point range. In addition to his seven rebounds, he also had a personal-best nine assists, giving him a direct hand in an astounding 62 of Toronto’s 105 points.

“Just got to give credit to my teammates. They knocked down shots when I gave it to them,” Leonard said after the game. “I’m not a guy that really controls the ball the whole game. [I] pretty much play off the ball and just try to give other people opportunities, just not try to be like a dominant ball player.“

Leonard speaks often about reading the defence. That’s not cliché sports gibberish. He’s reading and reacting at an elite level, and then he’s making his teammates better. Playmaking is hardly a new skill for Leonard, but that aspect of his game certainly shines brightly when the other Raptors knock down the shots he provides for them, and they certainly did that in Game 5.

The Bucks defenders have been sticking to Leonard, trying first to take away his dominant right hand. The fact that he can react in so many different ways – aggressively and decisively – makes him lethal as the Raps try to close out this series and advance to the NBA final for the first time in team history.

Leonard sometimes stares his primary defender in the face and then shoots over him. He can drive the ball into the paint in myriad ways, and take it to the hoop, even with two Bucks in his path. He could lure a couple of defenders with him to the rim and then kick a pass out to one of his wide-open teammates.

“We keep stressing that in this series and in the last series, too – when you’ve drawn two, you’ve done your job,” Raptors coach Nick Nurse said. “The other night I couldn’t believe he only had one assist because it seemed like he was passing the whole game, so we stepped in and made some for him [Thursday].”

The examples were many Thursday night. His own offensive prowess was making him the focus of Milwaukee’s attention and he was shooting well from deep, too – extra dangerous.

On one play, he could have rolled right into the paint, which would have created a decent mid-range jumper for himself or a so-so corner three for Marc Gasol. Or he could roll left, lure his defenders a different way and expose Fred VanVleet for a very wide open three-point opportunity across court. VanVleet got the pass and hit the three.

“They were collapsing when he got in the paint, but he gave it to you in every which way,” VanVleet said. “Any time he chooses to get the rest of us involved it’s going to bode well for our offence, and the rest of us just got to be ready to step up and knock them down.”

He assisted on big threes for Pascal Siakam, Normal Powell, Kyle Lowry, Marc Gasol and especially VanVleet. The reserve point guard hit 7-of-9 from deep on his second big shooting night in a row.

“It’s amazing, man. You’re watching a superstar. It’s amazing what he’s doing. We follow behind him,” Powell said. “At the timeout he’s walking back to the bench saying, ‘Play through adversity, weather the storm,’ and guys are really locked in and getting the most out of themselves because of him.”

The Raps star makes it look simple, and sound simple, too.

“Just trying to read the defence throughout the entire game, see what’s working,” Leonard said. “Either if it’s me scoring points or getting my teammates wide-open looks, just out there trying to win. It’s really about about me scoring, it’s just about being aggressive. Don’t shy away from anything.”

Drake’s goading elicits heated reactions during the Raptors’ run
May 24, 2019 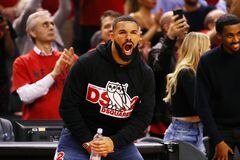 Raptors one win away from NBA finals after stealing Game 5 from Bucks
May 24, 2019 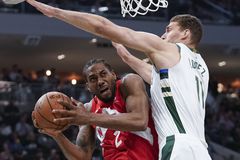