Kentucky Derby winner Medina Spirit failed a post-race drug test, once more putting the practices of his Hall of Fame trainer, Bob Baffert, and the embattled sport’s most recognizable personality, under uncomfortable scrutiny.

If disqualified, Medina Spirit would be stripped of the Derby title and the winning purse, becoming only the third horse in the 147-year history of the race to receive the penalty after finishing first. The colt cannot be disqualified until testing of a sample collected at the same time as the first sample confirms the result. Baffert will then have an opportunity to appeal.

The positive test comes as horse racing, acknowledging it has a drug problem, prepares to implement the Horseracing Integrity and Safety Act, which was passed last year in Congress as part of coronavirus pandemic relief. It takes effect July 1, 2022, and calls for a board overseen by the U.S. Federal Trade Commission to write rules and penalties to be enforced by the U.S. Anti-Doping Agency.

The agency, which regulates Olympic athletes in the United States, revealed Lance Armstrong’s cheating and issued him a lifetime suspension in 2012.

In a statement, Churchill Downs officials said that if Medina Spirit’s positive test were confirmed, the Derby’s runner-up, Mandaloun, would be declared the winner.

“Given the seriousness of the alleged offence, Churchill Downs will immediately suspend Bob Baffert, the trainer of Medina Spirit, from entering any horses at Churchill Downs Racetrack,” the statement said.

In a news conference Sunday morning outside his barn at Churchill Downs, Baffert said neither he nor anyone on his team administered the drug betamethasone to Medina Spirit. He insisted the colt had not been treated with the drug, a corticosteroid injected into joints to reduce pain and swelling.

“I was totally shocked when I heard this news,” Baffert said. “I’m still trying to absorb it. I am the most scrutinized trainer. And I am okay with that. The last thing I want to do is something that would jeopardize the greatest sport.”

He added, “I’m worried about the sport. This is a pretty serious accusation. We’re going to get to the bottom of it. We didn’t do it.”

At 12-1 odds, Medina Spirit was a surprising winner of the United States’ most famous race. The colt was sold as a yearling for only US$1,000 and was a bargain for his current owner, Amr Zedan of Saudi Arabia, at US$35,000. Baffert said he intends to run the colt in the 146th running of the Preakness Stakes on Saturday in Baltimore.

The positive test, however, adds to the questions surrounding Baffert. Regulators in Arkansas last month upheld a ruling that a banned substance had been found in two of his horses, but they decided to reduce his penalty from a suspension to a fine.

Medina Spirit tested positive for the same substance found last year in Baffert’s Gamine after the filly finished third in the Kentucky Oaks. Gamine was disqualified, and her owners were denied the US$120,000 purse for her third-place finish. Baffert was fined US$1,500.

At stake for Zedan is the Derby’s US$1.8-million first-place check, which would be awarded to the owners of Mandaloun. Bettors who backed Medina Spirit, however, would keep their winnings, while supporters of Mandaloun would be left with losing tickets.

Officials from the Kentucky Horse Racing Commission did not respond to calls and e-mails for comment.

Baffert has gained the enmity of rivals who believe he has persistently cheated, suspicions fuelled by 30 drug tests his horses have failed over four decades, including five in a little more than a year.

The cases took months, if not years, to adjudicate and were met mostly with modest fines or brief suspensions, as Baffert asserted he did nothing wrong and blamed environmental contamination or human error for the results.

In 2019, The New York Times reported that Justify – also trained by Baffert – had failed a drug test after winning the 2018 Santa Anita Derby in Southern California. The rule at the time required that Justify be disqualified, forfeiting his prize money and preventing his entry into the Kentucky Derby a month later.

The California Horse Racing Board’s chair at the time, Chuck Winner, had previously employed Baffert to train his horses. Justify’s failed test was investigated for four months, allowing the horse to keep competing long enough to win not only the Derby but also the Preakness and the Belmont Stakes to become the 13th Triple Crown winner.

In August, 2018, after Justify’s breeding rights had been sold for US$60-million, the racing board ruled that the failed test was the result of environmental contamination and disposed of the inquiry altogether during a rare closed-door session.

If Medina Spirit is disqualified, Baffert and the colt will join Maximum Security and Dancer’s Image as the only horses to have their Derby victories overturned.

In 2019, Maximum Security was first across the finish line, only to be disqualified for almost knocking over a rival horse in the far turn and slowing the momentum of others. The next year, Maximum Security’s trainer, Jason Servis, was among more than 27 people charged by federal prosecutors in a wide-ranging scheme to secretly dope horses and cheat the betting public.

In 1968, Dancer’s Image’s victory was taken away after a drug test showed the presence of a banned anti-inflammatory.

Last year, facing criticism, Baffert apologized for his horse’s violations and promised to be more vigilant in the future.

“I am very aware of the several incidents this year concerning my horses and the impact it has had on my family, horse racing, and me,” Baffert said in a statement. “I want to have a positive influence on the sport of horse racing. Horses have been my life and I owe everything to them and the tremendous sport in which I have been so fortunate to be involved.” 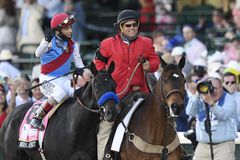