He seemed to mean he’d make that move eventually.

It turns out he intended to do it immediately.

He needed less than two rounds Saturday night to dispatch a hard-punching American challenger, Justin Gaethje, in the main event of a fight card that the UFC expected to threaten pay-per-view records in terms of viewership.

Nurmagomedov’s win unified the UFC’s lightweight title, solidified his place as the organization’s top fighter, and was his first win after the death of his father and trainer, Abdulmanap Nurmagomedov.

After his victory, Nurmagomedov took the microphone during a post-fight interview and said he was leaving the sport.

“No way I’m going to come here without my father,” he said.

Nurmagomedov’s emphatic win over Gaethje was the in-competition high-point of a tumultuous 2020 for mixed martial arts.

He started the year slated to face Tony Ferguson in April at the Barclays Center in Brooklyn, but the card was postponed because of the coronavirus pandemic and the UFC moved it eventually to Jacksonville, Florida. With Nurmagomedov unable to return to the United States from Russia because of pandemic travel restrictions, Gaethje replaced him as Ferguson’s opponent, then pounded out a bloody, one-sided, five-round technical knockout win.

Then in July, Abdulmanap Nurmagomedov died of COVID-19 complications.

Still, Khabib Nurmagomedov agreed to face Gaethje in a tantalizing matchup of styles. Nurmagomedov is a relentless wrestler who is also adept with punches and kicks, while Gaethje’s high-impact striking earned him the nickname “The Highlight.”

After a cautious first minute in their fight, Nurmagomedov applied pressure, absorbing heavy blows from Gaethje as the price of wading close enough to grab his opponent. Gaethje retreated, but also unloaded with full power, hoping to give himself space to operate. Near the end of the first round, Nurmagomedov dragged Gaethje to the ground.

In the second, Gaethje landed a hard kick to Nurmagomedov’s thigh. When he tried another, Nurmagomedov grabbed his foot and mauled Gaethje. He wrapped himself around the challenger and eventually knotted his legs around Gaethje’s neck, locking him in a triangle choke that he couldn’t escape. Gaethje submitted barely two minutes into the round.

The win earned Nurmagomedov a cash bonus for the best performance of the night, and afterward he laid his gloves on the canvas and explained that he and his mother agreed he should retire.

“I promised her it was going to be my last fight,” he said. “I have to follow this.”

“What he’s been through, we’re all lucky we got to see him fight tonight,” said White, who also revealed that Nurmagomedov competed with broken bones in his foot. “He’s one of the toughest people on the planet.”

Of course, other UFC retirements have proved temporary.

Long-time light-heavyweight champion Randy Couture once retired in the octagon, only to return. And after the May 9 event in Jacksonville, bantamweight champion Henry Cejudo announced his own retirement, but has said he would fight again for the right amount of money.

Nurmagomedov is in line for big paydays if he keeps fighting.

Earlier this month, he expressed interest in a superfight with UFC welterweight legend Georges St-Pierre, who is currently retired.

And in January, after Conor McGregor defeated Donald Cerrone, White spoke openly of pairing him with Nurmagomedov in a repeat of their high-grossing grudge match, which ended with a melee in the stands. White said a fight of that size could land at the O2 Arena in London, or AT&T Stadium in Arlington.

McGregor is currently scheduled to meet Dustin Poirier in January, and Nurmagomedov said neither man could change his mind about retiring.

“Dustin and Conor are going to fight in January. I choked out both of them,” Nurmagomedov said. “I’m not interested.” 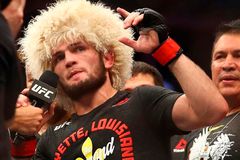 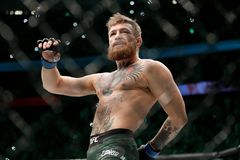 Melee at UFC 229 after Nurmagomedov chokes out McGregor
October 7, 2018 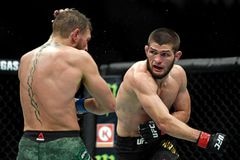