It was hailed as the people’s victory. Less than two days after 12 of the most prestigious clubs in soccer announced their intention to launch a breakaway competition called the European Super League, which would guarantee them hundreds of millions of dollars in new revenue, a revolt in the British streets forced club owners to strangle the plan in its cradle. But though fans celebrated their newfound power over what they called the owners’ greed, some observers noted that those same fans’ demands for high-priced talent had pushed many of the clubs deep into debt. Kieran Maguire, a popular soccer economist and University of Liverpool lecturer whose 2020 book, The Price of Football, has suddenly become a must-read, explains the economics of the European game.

Advocates for the ESL such as Florentino Perez, the president of Real Madrid and the founding chair of the new league, touted the project as the solution for the broken economics of European soccer. Are the economics actually broken?

I don’t think so. Revenues have been rising over the course of the last 20 years at least, but what we have started to see is a plateauing of broadcast revenues. And the cost base has always been very poorly controlled. If we take a look at the Premier League, for example, since its inception in 1992 revenues have risen 2,800 per cent, but employment costs have risen by 3,100 per cent. So there’s been a complete failure of cost control.

The ESL would certainly help the big teams’ revenues, but would it do anything for the others?

[Advocates] say, ‘Well, we will give the poor teams some of our money to make up the shortfall.’ But as soon as you investigate the numbers, this is where it all starts to fall apart. Trickle-down economics doesn’t work in any other micro-economic environment, so the idea that it should work in this industry is unproven at best and disingenuous, probably, at worst.

So, rather than actually growing the pie, they’re – sorry to mix metaphors – they’re tilting the table, rewarding the already rich or at least those with deep pockets. It seems the plan would create more of what we already see in other industries – such as retail or home entertainment with the rise of Amazon and Netflix – where there are a few huge winners and a lot of losers. Is that right?

Yes. And I mean, could they grow the pie with some of the suggestions [from Perez etc.] such as reducing the length of a football match to 70 minutes? Because apparently young people have short attention spans? I think that’s fairly insulting to the younger generation, because if you talk to any parent who has tried to get their child away from Fortnite where they’ve been welded for eight hours – it is a physical impossibility. They can concentrate when they want to. So, it’s all old men thinking they know a lot more about the younger generation, and they don’t.

Here in North America, we have salary caps in some of the cartel leagues – the NHL, NBA, NFL – that helped inspire the Super League proposal. Could caps help fix European soccer?

Some form of wage cost control is desirable. Because, in the second tier of English football championship, wages – in a non-COVID year, the last year I’ve got the data for – were 107 per cent of revenue. So you then have to ask yourself, well, why is this the case? It’s because the club [managers] are weak. I think there is a fear, because of the transfer system, that you might lose your talent if you don’t accede to wage [demands].

And also, the fundamental problem is that the revenue gaps between the Premier League and the second tier is so large. The [Premier League] broadcast deal is worth a minimum of £95-million ($165-million), potentially up to £160-million [per team], depending on where you are on the table in the top tier. And that drops to £7-million in the second. Can you see the incentive? So, therefore, what happens is that clubs [in a fight for promotion to the top tier, or a playoff position] three months before the end of the season, they want to cement it, so what do they do? They sign a player on a 3 1/2-year contract on wages, which are not sustainable in that division, in the hope that they will get promoted. They don’t get promoted and then they’ve got a legacy cost going forward for the next three years.

Is there a solution?

Right: One of the chapters in your book is called ‘Ownership models: Love, vanity, insanity,’ which seems to sum things up nicely.

For a club such as Manchester United, which is owned by the Glazer family, which owns the Tampa Bay Buccaneers; or Liverpool, which is owned by John Henry, who owns the Red Sox – they are used to the American system, they see a sports club as a vehicle through which they can make profits. Nothing wrong with that. Nobody is arguing with that.

But then we have clubs such as Chelsea, which is owned by a Russian oligarch, and Manchester City, which is owned by Sheikh Mansour’s family – a Middle Eastern wealth fund, in effect. The objective of those is: ‘We want to win trophies, and therefore financial controls are not much interest to us.’ And the two systems sit really uneasily with each other.

Perez said that one of the reasons to create a Super League is to give new fans from around the world more matches between the very top teams – and of course have them pay to watch those matches on TV. How important a factor is the increasing globalization of soccer?

Well, football is a global sport and there’s a lot of eyeballs in China. So there is a desire – it’s a bit like the British bands of the ’60s [who said], ‘Let’s go and break America.’ – ‘Let’s break China. … If we can get 10 per cent of the Chinese population to support our football club, that’s an awful lot of people.‘ There are fundamental problems, though, such as different culture and the time difference.

[The Super League] was going to be a midweek competition taking place in the evenings in Europe – well, that immediately gives you that not-quite-so-desirable 3 a.m. slot on a Thursday morning in Beijing.

Some of the teams believe they have hundreds of millions of fans around the globe who are desperate to give them money. As Perez said during an interview this week, ‘We have fans in Singapore, in China, across the world, you see that on social media, the followers we have. That’s what brings in money.’ Manchester United claims to have a billion fans. Is there anything to that?

That’s a bit like asking: ‘Who is my favourite NFL team?’ and you give me a list and I go: ‘The Buccaneers,’ – or whoever. Does that move the dial in terms of their revenues? No. 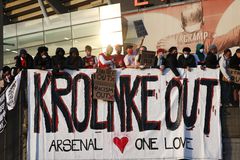 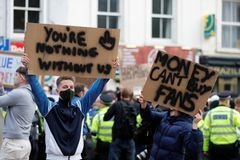 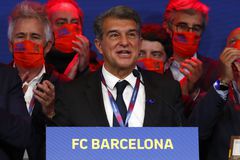