Raptors coach Nick Nurse finally had a full complement of able-bodied athletes to choose from for Toronto’s game against the Charlotte Hornets on Sunday night.

No load management to see here folks. Keep it moving.

But not even the full-strength squad could prevent Charlotte from pulling off a buzzer-beating ending to this game.

With about a second to go at Scotiabank Arena, Jeremy Lamb hoisted up a seemingly impossible shot from just before the Charlotte side of midcourt and the ball astonishingly fell right through the hoop to provide the Hornets with a surprising 115-114 victory over the Raptors.

It was a stunning turnaround to a game in which Leonard hit a mid-range jumper with about 44 seconds that moved Toronto in front 114-112. It appeared the home side would hang on for the win before Lamb’s last-hope shot found nothing but net.

​When was the last time Lamb successfully completed such a circus shot? “My driveway growing up, counting down by myself,” he said after the game.

He admitted that he did not expect the shot to fall. “When I first shot it, it felt good. But in my head I was thinking like, ‘it’s too good to be true if it goes in.’ I never in a million years thought it would go in.”

Sunday was just the fourth time in 18 games – since the arrival of Gasol in a trade-deadline deal with the Memphis Grizzlies – in which Nurse was able to use all his prominent players in his starting lineup.

And with the recent return of Serge Ibaka from suspension and Fred VanVleet from a lengthy layoff recovering from a thumb injury, Nurse had a full bench for only the second time since the Gasol trade.

With just eight games left in the regular season in which to fine-tune this group, for what the Raptors are hoping will be a long playoff romp, the return to health is occurring at just the right time.

“I feel really good about where we are right now,” Nurse said before the game. “Who are we exactly? I don’t know. Are we a nasty defensive team? No, but we’re pretty good and I think we’re continuing to get better. I don’t think we’re intimidating anybody for 48 minutes with our defence, right?

“But I think we’re really good and we’re climbing to a place – I don’t want to say is great – but that’s where we’re heading.”

Sunday night, the Raptors were heading mostly down, continually beguiled by a hot-shooting Charlotte outfit that is fighting for its playoff life in the Eastern Conference, and it showed.

The desperate Hornets (34-39) connected on 18 of their 41 three-point attempts in the game and carted a seemingly secure 95-83 lead heading into the fourth quarter when the Raptors finally found some bite. It made for a wild and woolly finish.

The Raptors, (51-23), ease into a relatively sedate portion of their remaining schedule, their next three games against the Chicago Bulls (whom they will play twice) and the New York Knicks, teams whose playoff hopes went up in smoke long ago.

While the return of Lowry after a short absence of two games with a sore right ankle was a positive sign, it allowed Nurse the luxury of using VanVleet off the bench as the backup guard.

In the previous four outings he had played in since his return after an absence of 12 games with a thumb injury, VanVleet had been red hot, averaging 15.3 points and 6.8 assists.

The Raptors hit four of their five three-point attempts in the opening quarter – and 66.7 per cent over all of their field goal attempts – to surge into a 32-27 lead.

The Hornets began abusing Toronto’s second unit at the start of the second quarter and a Frank Kaminsky three-ball provided Charlotte with a 46-41 lead, capping a 13-0 Charlotte run.

That lead extended to as many as eight before the Raptors were roused from their slumber to cut the advantage to 58-57 heading into the break.

Charlotte continued an effective long-distance attack in the third quarter, led by Bacon, who canned five of his seven three-point attempts to help the Hornets into an 86-76 lead. 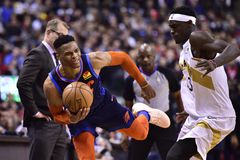 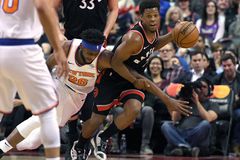 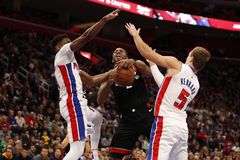