Everybody has fallen in love with the Toronto Maple Leafs as the team to break Canada’s 25-year Stanley Cup drought. But it might just be the Winnipeg Jets who accomplish that.

The Maple Leafs may be the darlings of the oddsmakers, but the Jets are big, fast, skilled and better than the team that went to last spring’s Western Conference final.

The Jets won’t surprise anyone this year. They quietly moved up the NHL ranks last season and then shocked everyone in the second round of the playoffs by knocking off the conference’s defending champion, the Nashville Predators, in a fast-and-furious series, the best of the playoffs.

With that experience under their belts, the Jets are now poised to take the next step. Their top line of centre Mark Scheifele and wingers Blake Wheeler and Kyle Connor is one of the best in the league. Goaltender Connor Hellebuyck played his way into the top tier of goaltenders with his work in the playoffs. At 25 years of age he, like his teammates, is only getting better.

Another interesting story among Canada’s Western teams is the Edmonton Oilers. They fell fast and hard last season after finally making the playoffs and winning a round in 2016-17. General manager Peter Chiarelli and head coach Todd McLellan were both spared the axe, but they are at the top of the first-to-be-fired lists this season if they don’t find a way to fix a power play that has Connor McDavid on it, improve the penalty killing, defence and the play of goaltender Cam Talbot. Not an easy to-do list.

While McDavid has made himself the No. 1 player in the league over the past couple of years, Sidney Crosby of the Pittsburgh Penguins is not letting go of his former status easily. Crosby’s fellow Cole Harbour, N.S., native, Nathan MacKinnon of the Colorado Avalanche, pushed himself into the conversation last season with a 97-point season that some thought should have brought him the Hart Trophy as the NHL’s most-valuable player ahead of former Oiler Taylor Hall. In any case, the debate of who’s best should rage all season.

And last year’s Stanley Cup champs? The Washington Capitals, led by Alexander Ovechkin, put on the longest, loudest Cup celebration in NHL history over the summer after they finally ended decades of playoff failure by winning their first NHL championship. However, a repeat is unlikely. Ovechkin is aging, head coach Barry Trotz was clumsily pushed out and, combined with NHL parity, this makes it a long shot.

Last season’s other Stanley Cup finalist, the surprising Las Vegas Golden Knights, are also considered unlikely to repeat their feat. The expansion outfit’s first-year ride to the final ended in defeat at the hands of the Caps and not many experts expect a winning sequel season. While the Knights will probably remain among the Cup contenders, the Jets and a few other big and strong Western Conference teams such as the Predators and the San Jose Sharks, who won the Erik Karlsson sweepstakes, make a repeat as conference champions unlikely for the Knights.

This, of course, fuels the Las Vegas managers and coaches, who used the low expectations in their first year as a rallying cry for the players. They played on the fact they were all rejects from the rest of the league to motivate themselves.

There was also a quick bond with the city and its people thanks to a terrible tragedy. On Oct. 1, 2017, the worst mass shooting in U.S. history took place in Las Vegas when 58 people were killed and 500 were wounded. The Golden Knights made a lasting connection to the city by raising money for the victims, visiting them in hospitals, visiting and honouring the first responders and organizing blood drives.

On the ice, head coach Gerard Gallant won the loyalty of his players with his low-key style and turned them into a team that could fore-check like no other. Backing it all up was goaltender Marc-André Fleury, sent packing by the Penguins, who played all season like someone with something to prove.

It was a perfect storm, and one that will be hard to do again. Fleury will be 34 in November and that underdogs-against-the-world attitude will be hard to keep going in the league’s most-competitive conference.

Off the ice, the NHL will probably welcome Seattle as its 32nd team before Christmas. Tod Leiweke, the chief executive and president of the prospective Seattle ownership group, will meet with the executive committee of the NHL’s board of governors on Tuesday.

Leiweke will tell the governors where the Seattle bid stands, with the key detail being last week’s approval by city council of the ownership group’s US$700-million plan to rebuild KeyArena. Given the eagerness of the NHL to bring Seattle into the fold, the latest news should mean a vote to approve the franchise will come at December’s annual governors meeting.

Then the only question will be if the Seattle group can get the arena finished in time to play the 2020-21 season.

With expectations sky-high after Tavares addition, Leafs ready to get rolling
October 1, 2018 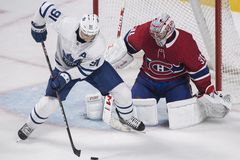