One game after a near-perfect performance, the Toronto Maple Leafs showed they still have a few hockey lessons to learn.

So they will have to go back to Boston for a seventh and deciding game in their first-round NHL playoff series against the Bruins to prove they can both learn from and banish history.

From the start on Sunday afternoon, the Leafs looked as though they were going to build on their excellent win in Game 5 of the series in Boston and close out a team that has crushed their postseason dreams more than once. But the more experienced Bruins withstood the early push and took advantage of one of the Leafs’ key weaknesses – their penalty killing – to score two power-play goals, seize the game and, with a 4-2 win, force a deciding game on Tuesday.

Going into the game, Leafs head coach Mike Babcock remarked more than once the next hard lesson for his young group of players was how to close out a series, to win that fourth game against a team such as the Bruins that you know is going to push hard.

For the first half of the first period, it looked as though the Leafs were going to show the coach they were catching on, as Morgan Rielly gave them the early lead. But a bad bounce on one power play resulted in a goal by Brad Marchand and sagging on the next power play allowed Torey Krug to score. The Bruins had a lead they never gave up despite a strong effort from the Leafs in the third period.

“I thought we were really ready, we were jumping big time,” Babcock said. “But then, as soon as we had a little adversity and they scored twice, we didn't recover. I don't know if that's the emotions got the better of us, but we couldn't get 'er back in check.

“To say we weren't ready, that would be totally wrong. We started really well, we played really well and then, boom. Once they scored, we didn't recover very good. We talked about it and prepared for it, but it didn't happen.”

The Leafs had the Bruins on the defensive for almost all of the first 10 minutes of the game, right up until forward Tyler Ennis took a holding penalty. Then, a combination of bad luck and the Bruins’ ability to pounce on the slightest opening went against the Leafs.

Bruins centre Patrice Bergeron and Leafs forward Zach Hyman took a faceoff in the Leafs zone and they locked each other up on the draw as the puck lay there. Leafs winger Mitch Marner missed a chance to clear it, which allowed Marchand to fire a shot toward Leafs goaltender Frederik Andersen. The puck bounced off Leaf defenceman Ron Hainsey’s leg to get by Andersen at 11:23.

Six minutes later, Krug scored on a rebound and the Bruins were two-for-two on the power play for a 2-1 lead and the edge they needed. It was another bad night for the Leafs’ special teams as their power play went 0-for-3 to leave both units blanked.

“I thought we started pretty well, then they capitalized on their power-play opportunities and we didn’t,” Leafs centre Auston Matthews said. “Suddenly they’re up 2-1, they’ve got momentum on their side. I thought we got in our own way.

“They were fore-checking pretty hard and it was not as clean as we would like midway through the game. In the third [period], we had some pretty good sustained puck-pressure in their zone, some good opportunities just didn’t go in.”

The emboldened Bruins locked down the Leafs in the second period, not allowing them so much as a shot on goal until after the seven-minute mark. And almost immediately after that happened, Jake DeBrusk scored to put them ahead 3-1.

By the time the third period started, only Andersen’s excellent work in goal kept the Leafs in the game. But in finding themselves in the game, the Leafs also found a second wind and, with Matthews leading the way as he did in Game 5, they rode an early goal from him to keep the Bruins nervous in a highly entertaining, back-and-forth period.

Driving the Leafs from the back end was Rielly, who once again seemed to be on the ice for the entire period. He finished with 25 minutes 49 seconds of ice-time, the most of any of the skaters.

But the Leafs could not crack Bruins goaltender Tuukka Rask and neither could they get control of the puck once Andersen was pulled for an extra attacker in the final two minutes of the game. Marchand struck for an empty-net goal to make sure the series returned to Boston.

With that return to Boston for a seventh game for the second year in a row – and the third time in seven years – and with the Leafs having lost two of them by blowing third-period leads, the usual questions returned. But John Tavares, who reminded reporters he wasn’t around for those collapses, was having none of it.

“It’s a new set of circumstances; it’s a different team,” he said. “It’s a lot of guys who haven’t been here, including myself. We’ve got a lot of belief in this locker room and the type of group we have.”

Rielly wasn’t in the mood for the how-can-you-win question, either.

“Well, we’re going to have to score more goals than them,” he said. 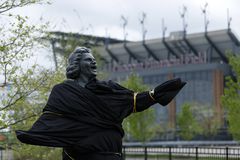 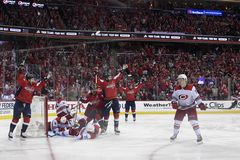