An NHL investigation cleared Morgan Rielly of a charge of uttering a homophobic slur at a referee during a game on Monday night. At that point, both the Toronto Maple Leafs defenceman and the management of his team could easily have let the matter rest.

Rielly and the Leafs could have remained silent Tuesday on what was an off-day for the team or they could have complained he was unjustly considered guilty by a large faction on social media after a video clip surfaced late Monday night after the Leafs’ 6-2 loss to the Tampa Bay Lightning. Instead, Rielly and Leafs general manager Kyle Dubas held a news conference Tuesday afternoon to address the matter head-on.

Dubas said they were not meeting the media to complain about being victims of the latest social-media storm that blew up when people jumped to conclusions about what may have been said on the video in question. They wanted to use the controversy to make it clear where the Maple Leafs stand as an organization on homophobia.

“In talking to Morgan, I don’t think the team or Morgan are victims at all,” Dubas said. “I don’t want it to be perceived Morgan feels that way or that the team feels Morgan was slandered. I think some people rushed to judgment and that’s what happens in 2019.

“But there are a lot of people in our community and people we know, people who have family members and they are affected by homophobia every single day in our community and all throughout the world. Every time it’s even thought that those type of words are uttered in our facility or anywhere, we have to do our part as Toronto Maple Leafs to use this situation to continue to do our part to [fight] casual homophobia, vulgar homophobia, things that make people of any sexuality or sexual orientation feel uncomfortable and unsafe in our facilities. In talking to Morgan, he’s of the same mind, and that’s where we stand on it today.”

The furor started over a play late in the second period of Monday night’s game. The Maple Leafs gave up a short-handed goal when Rielly lost the puck just as most of his teammates made a change on the fly. This left him alone in defending three Lightning players who took control of the puck in the Leafs zone as Rielly scrambled to get back.

Early in the video clip, it appeared Rielly was angry at referee Brad Meier for not calling a penalty against the Lightning. He was facing Meier at close range and it sounded as if an epithet and a homophobic slur were yelled out. However, it was not clear exactly what was said and by whom.

Once the video clip turned up on social media late Monday night, a debate raged over who said what. When he became aware of the controversy after the game, Dubas called Rielly back to the arena to discuss the matter.

By this time the NHL had launched an investigation and the Leafs decided to reserve any comment until it was completed. After talking to all of the parties involved and reviewing all of the available audio and video from Sportsnet and Fox Sports, the networks that broadcast the game, the NHL’s senior executive vice-president of hockey operations, Colin Campbell, made a decision. He announced on Tuesday that in the league’s judgment, Rielly did not direct any homophobic slur at the referee.

Meier, the referee, told the NHL investigators he did not hear any slur from Rielly or anyone else.

Campbell said in a statement released by the NHL that “league officials interviewed several participants in the game – including Rielly and Meier – and reviewed audio of the alleged incident. All of those interviewed adamantly denied that Rielly uttered a slur and the audio supported their statements.”

Rielly said remaining silent through the NHL investigation was difficult.

“I mean, I was 100-per-cent confident that I didn’t use the word, so we allowed the process to play out,” he said. “And it was difficult at times to not make a statement, because of how strongly I felt about it, and the fact that it is a very important issue.

“But I’m very happy that it came out [Tuesday] that the word wasn’t used by me. And I think it’s an opportunity for us as a team to realize that there’s really no place for slurs like that in sport and in life.”

Dubas said the audio from the video clip was confusing enough for people to draw different conclusions about what was said. But the decisive evidence was provided by Meier.

“If a player who is hot at a non-call said that to an official, the official in my opinion would have ejected the player right away from the game,” Dubas said. “So the first step was for me to sit down with [Rielly] and asking directly to his face, ‘This is the video, what did you say?’

“He was unequivocal in his response that he didn’t say that. That word did not leave his mouth. The next part was the NHL contacting the official, Brad Meier, and the official stating, ‘That did not happen, I did not hear Morgan Rielly say that to me.’ ” 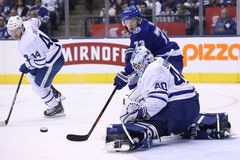 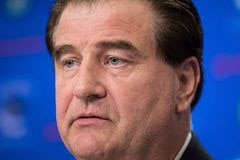