Once again, the Toronto Maple Leafs are playing their dangerous game.

That game isn’t hockey. The Leafs play that all the time, at wildly disparate levels of skill and engagement.

On Friday night, they had one of their ‘Oh, sorry, I didn’t realize we were getting paid to do this’ games. After sleepwalking through the first 56 minutes of play, Toronto woke up in the final four.

Down three goals? No problem.

Pull the goalie and go to town? Just like they drew it up in practice.

It says something wonderful and awful about the past decade of Toronto hockey that this 4-3 win was probably the best game of all of it.

Now we move on to Sunday and what would represent the greatest playoff triumph in recent Leafs history. Admittedly, that’s not a high bar. It’s not even a bar. But it would be something.

But that dangerous game the Leafs are playing is flirting with competence. If the Leafs manage that – and I would strongly caution them to think very hard about this next step – that will create expectations.

Everyone on this Leafs team not named Morgan Rielly has never seen this town when it gets like this. For the past few years, they’ve had a soft ride. ‘Lost again? I bet that hurts. You’ll be better next time, champ. We believe in you.’

The Leafs have never given anyone a reason to believe. They continue to make the same mistakes, lose the same sorts of games and trot out exactly the same excuses. ‘Just didn’t have it’; ‘disappointed in ourselves’; ‘try to learn from this and come back better’.

And people have accepted that.

Much of that is connected to the primary philosophy that management has banged into the heads of Toronto fans – that they will no longer trade players or fire coaches just because you are upset. This is the team you’ve got, so like it or lump it.

This has been the key virtue of the Brendan Shanahan era – stability. But at a certain point, if you haven’t made any progress, stability begins to look like stasis.

One thing changed this year. The club broke its own rule. Firing Mike Babcock made it clear that the Leafs will make major changes if enough pressure is applied.

Unusually, in that case, Babcock was the one applying the pressure. He was asked to make small changes to his style and refused. What had come off as self-belief early in his tenure now began to resemble egoism and pig-headedness. And so an example was made.

History teaches us that after you’ve made an example of one person, you tend to make a few more before you’ve finished.

We still don’t know if firing Babcock was the right idea. If the Leafs end up losing this series, it wasn’t. They could’ve lost just as easily with Babcock playing the fourth line all night as you did with Sheldon Keefe giving the kids the keys to the car.

If Babcock was the one going down here, that would’ve given management the freedom to fire him in the off-season and start fresh. There are no more fresh starts now. Now now and not ever.

A side-effect of firing Babcock – one no one will start seriously considering until this season is done one way or the other - is introduce the concept of ‘change’ into this Leafs team for the first time.

Until now, there was faith that time would do the trick. As the young core got older, it would get better. More important, it would become more mature, less flaky, less likely to turtle once things got tough.

That impression now depends entirely on one game – Sunday’s decider.

If the Leafs take it, they have – huzzah! – won a (faux) playoff series. There is only one city in the world where that allows a squad full of luxuriously rewarded superstars to celebrate like they’ve achieved something, and fortunately the Leafs play in it.

Maybe there’s something to the ‘monkey on the back’ theory. Maybe the Leafs just have to get off the launch pad in order to break orbit. It’s that sort of magical thinking that makes this market simultaneously the best and worst in the world.

But since this is a newspaper column, let’s focus on worst-case scenarios. Having given people hope, let’s say the Leafs lose. Let’s say they lose badly – either blown out or (worse) on some horrible lapse in the final minutes of the game.

That will make people angry. For the first time in a while, it will make them angry enough that they expect the team to change. The top guy on most hit lists will be (insert Goat-du-Jour here). He’s a) been largely invisible in this series; b) makes a lot of money, which bothers people and c) has the sort of contract that can be moved.

This isn’t because people think the Goat-du-Jour is to blame for this still-theoretical loss. He isn’t. It’s because they want the team to prove to them they feel bad for losing, and the easiest way to do that is by punishing someone for it.

The Leafs aren’t going to trade Goat-du-Jour because they know to a certainty that they are not getting back as much quality as they’ve giving away. And, more important, because they don’t want to start going down the road of giving angry fans what they want. Once you start that, you can’t stop.

Then people get really upset.

And now Shanahan and Dubas find themselves where so many of their predecessors ended up – fighting off their own fanbase as well as their opponents.

This is how expectations get you in trouble. The Leafs created some huge ones on Friday night. Now they have until Sunday to clean this mess up. 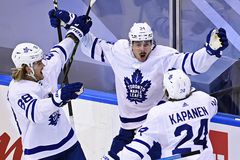