All five of Toronto’s major sports organizations have teamed up to create a special fund to help arena, stadium and support staff who need extra financial assistance because of the novel coronavirus.

The new Team Toronto Fund will see management, coaches and players from the Maple Leafs, Raptors, Blue Jays, Toronto FC and Argonauts contribute to provide additional aid to hourly and part-time workers who are otherwise not being paid because games have been suspended across all major leagues in North America.

As COVID-19 has brought the entire sports landscape and greater Toronto area to a standstill, club presidents Mark Shapiro of the Blue Jays, Brendan Shanahan of the Maple Leafs, Masai Ujiri of the Raptors and Bill Manning of Toronto FC and the Argonauts have agreed to lead the charge for their respective organizations.

“As the entire world grapples with the challenging effects of COVID-19, our Toronto sports community must band together and support each other,” Shapiro, the president and chief executive officer of the Blue Jays said in a statement Sunday night. “No matter the outcome of the game, our staff are often the people Toronto fans remember most about their trip to the ballpark, field, or arena – for their smiles, helping hands and passion.

"It is an honour to join my counterparts and sports leaders in our city to help make a meaningful impact on the lives of all our game-day staff.”

Last week, as the coronavirus brought sports to a halt, thousands of workers for teams across multiple leagues were left without jobs.

Some organizations, such as the Dallas Mavericks, committed almost immediately to help workers paid hourly and other part-time employees when the NBA suspended games.

Others have since fallen in line.

On Sunday evening, True North Entertainment, the group that owns the Winnipeg Jets, told part-time and casual employees that they would be paid for the NHL team’s four remaining home games, as well as games that were scheduled to be played by its AHL affiliate, the Manitoba Moose.

A statement by True North executive chairman Mark Chipman and president and chief operation officer John Olfert said casual and part-time employees will be paid as though the scheduled events, including concerts at the Bell MTS Centre, had occurred.

True North had originally taken the stance that it expected the games and other events to be rescheduled and, because of that, workers with part-time agreements did not have to be paid.

“We sincerely apologize for any concern that our original position may have caused,” True North’s statement said. “We wish you and your families all the very best as we navigate these unique and challenging circumstances.”

With that announcement, all Canadian NHL teams and a majority of pro sports teams, have agreed to pay part-time arena staff.

Earlier Sunday, the Calgary Flames reversed a decision they had previously announced not to compensate some workers.

“It has been a very challenging week for all of us,” John Bean, the president and chief executive officer of Calgary Sports Entertainment, said in a message to arena workers. “We may not get everything right, out of the gate, but we can assure you that we will continue to work hard to do what is right for our [family].”

The statement said the corporation, which owns the NHL Flames, CFL Stampeders, WHL Hitmen and Roughnecks of the National Lacrosse League, has created an income-bridge-support program for qualified employees.

The program allows part-time workers affected by the temporary halt in operations to receive a top-up payment of 45 per cent in Employment Insurance benefits up to the maximum of 95 per cent allowed by Service Canada through to the conclusion of the Flames’ regular season. Employees ineligible to receive employment insurance benefits, because they don’t work sufficient hours, will still receive the 45-per-cent top-up portion.

The decision was made after nearly US$50,000 had been raised for part-time staff at the Scotiabank Saddledome via the crowd-funding platform GoFundMe. Two Calgary players – Matthew Tkachuk and Mikael Backlund – each donated $5,000 on Sunday.

The account was established on Saturday by Raymond Lau, who formerly worked as a busboy in the Chrysler Club at the Saddledome. Lau, who earned minimum wage when he worked there, said he hoped to raise US$10,000, but the pot had exceeded more than $60,000 Sunday evening. He said funds raised will be forwarded to the Flames’ Community Foundation.

“It was never blaming the organization,” said Lau, who has become a season-ticket-holder. “It was about helping the employees. I still love the Flames and am glad they did the right thing.

In Montreal on Sunday, the Canadiens likewise initiated a program to help 1,200 game-day employees who would otherwise go unpaid. The NHL, MLB and Major League Soccer all suspended their seasons on Thursday because of the outbreak of the novel coronavirus.

“Our industry is going through a difficult time right now and our employees are being hit especially hard by recent events,” said Geoff Molson, the club’s owner, president and CEO. “The Montreal Canadiens and Laval Rocket are deploying the means necessary to reduce the impact of this unique situation on our employees, whom I wish to sincerely thank for their collaboration and understanding.”

Molson said that part-time workers who were not eligible to receive employment insurance would get 75 per cent of their salary for the Canadiens’ four remaining regular-season games and eight games for the Rocket of the AHL. Employees eligible for EI would have their benefits topped up by 45 per cent so they will receive 95 per cent of their pay.

There has been an outpouring of help to part-time employees all over the sporting world.

The NBA’s Golden State Warriors announced on Friday night that their players, coaches and owners would donate US$1-million to a relief fund for arena workers set up by the organization’s community foundation.

New Orleans pelican star Zion Williamson pledged to cover the salaries of part-time workers at the team’s home arena for 30 days. Giannis Antetokounmpo of the Milwaukee Bucks donated US$100,000 to arena employees, a figure that was matched by the club. Kevin Love of the Cleveland Cavaliers and Blake Griffin of the Detroit Pistons likewise donated US$100,000 to their respective clubs’ arena staff.

On Saturday, the Oilers Entertainment Group announced it was rolling out a plan designed to help its staff of 1,650 part-time workers.

“Since the National Hockey League announced the pause of the 2019-20 season due to the COVID-19 virus, we have been working hard to gather information and assess what this means for our fans, our staff, our players, our organization and our community,” Tom Anselmi, the group’s president of business and chief operating officer, said in a statement. “The pause of NHL hockey, concerts and events at Rogers Place has hit everyone hard, but it has created an even more difficult situation for our part-time staff.”

Anselmi said all part-time staff affected by the halt in operations would receive financial payment to bridge them between their maximum EI benefits and their regular average earnings for remaining regular-season games.

On Thursday, shortly after the NHL and other leagues announced a cease, MLSE committed to helping its 4,000 part-time workers.

“The current postponement of all MLSE-related events and games has halted the company’s operations and as a result, it will have a direct impact on the event staffing schedule,” MLSE said on Thursday. “Regardless, we are one team and know it is important to support all our hourly employees, not just those due to be scheduled.”

The announcement went on to say that anyone affected by this temporary halt will receive a financial payment to bridge employees between their EI benefits and 95 per cent of their regular average earnings for four weeks. Those employees who do not qualify for EI benefits will be paid the 45 per cent top-up portion.

Company that owns Jets says it will pay employees during NHL suspension
March 15, 2020 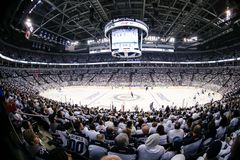 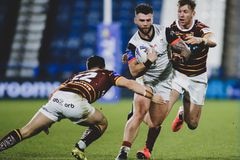