Early in the day, the Toronto Maple Leafs swore they were ready to do something about their embarrassing 3-5-0 record at home.

“Good question,” Leafs winger Kasperi Kapanen said when the now daily question of why they are so awful in front of the home crowds came up. “We’ve been asking ourselves that for a while now.

“I think today enough’s enough. To be honest, I think the guys are ready to go and excited to play. We’ll see how it goes.”

Well, the Leafs managed a 3-1 win to raise their overall NHL record to 10-5-0, so the result was good. But that was only by the grace of Leafs goaltender Frederik Andersen, who was outstanding in holding off the Vegas Golden Knights. They outshot the Leafs nearly two-to-one as the hosts clung to a one-goal lead as the third period wound down.

But the Golden Knights could not get anything past Andersen, who finished with 36 saves. Nazem Kadri finally eased the tension with 34.1 seconds left when he scored an empty-net goal.

There is no way Andersen should have to buy a drink in the company of his teammates for a good long while. And he’ll never have to worry about getting slagged in an Uber.

“Obviously everyone sees every night Freddy Andersen has been unbelievable for us every single game here,” said Leafs winger Mitch Marner, who scored what stood up as the winning goal. “He’s the reason we stole one tonight. He seems like he’s got no pressure on him. He just goes out there and has fun with it.”

By the end of the second period, that whole playing better at home thing was hanging by a thread. The Leafs held a 2-1 lead but that was only thanks to Andersen’s heroics. He faced 18 shots in the second period alone and 31 through the first 40 minutes, coolly holding off the Golden Knights.

As the second period wound down, the Leafs resembled nothing so much as a punch-drunk fighter wobbling blindly around the ring until he was saved by the bell. Their breakouts by then consisted of a series of flip passes to centre ice that were quickly turned back into the Leafs zone by Vegas.

“I think we stopped playing,” Marner said of what happened after he scored nine seconds into the second period. “We didn’t get on the fore-check at all. We didn’t help out our D [defence]. We weren’t slowing people down at all. They’re a fast team and I think when we do that it makes it hard on our D.”

That is exactly what Leafs head coach Mike Babcock was worried about before the game. Even though the expansion Golden Knights came into the game with a 6-7-1 record and a hangover from their magical first season that ended with a trip to the Stanley Cup final, Babcock was expecting trouble.

“I thought we started real good the first 10 minutes and then I thought we got fooling around with the puck and they showed us how fast they were,” Babcock said. “In the end, when you look at this game, it's kind of like when Pittsburgh left here with the points or Dallas left here with the points [in recent games]. You thought you had done enough to win and you didn't. [Tuesday night], the shoe is on the other foot and we'll take 'er and maybe we can loosen up at home a little bit and play.”

Outside of a couple of forced turnovers that produced their two goals, the Leafs really weren’t allowed to generate much offence. Both of those turnovers came early in each of the first two periods, followed by a Golden Knights push-back.

On the first one, Leafs centre Par Lindholm managed to keep the puck in the offensive zone with a strong effort but it landed on Vegas defenceman Nick Holden’s stick in the slot. Not for long, though. Leafs forward Connor Brown quickly stole the puck, spun around and beat Vegas goaltender Marc-Andre Fleury to the top corner at 5:30.

It was the first time in six games the Leafs managed to score the first goal of the game at home. At that point, it looked like the Leafs were off and running but as the period went along they started to sag.

Then, off the opening faceoff of the second period, John Tavares stripped Vegas centre William Karlsson of the puck at the Knights blue line. Tavares slid it to Marner on the right side and he beat Fleury with a shot nine seconds into the period to put the Leafs ahead 2-0.

The Leafs managed to hang on to their lead but it wasn’t long before that was all they had. The Golden Knights had the puck for pretty much the rest of the period.

Vegas finally beat Andersen at 11:22 of the second period and it took a nasty deflection. Cody Eakin tipped a point shot by Shea Theodore in front of the net to cut Toronto’s lead to 2-1.

However, even though the Golden Knights hit the post three times in the second period they could not get another puck behind Andersen and the Leafs clung to their 2-1 lead. All in a night’s work, said the diffident goaltender.

“I, personally, feel good,” Andersen said. “We're keeping [the shooters] a little bit more to the outside, which is helping me out, seeing the puck better and clearing the shooting lanes. It's not so many times I have to fight through traffic and, obviously, that makes my job easier.”

The Golden Knights lost centre Erik Haula early in the third period to a nasty but clean hit by Leafs winger Patrick Marleau. He knocked Haula hard into the boards and the Vegas player stayed down on the ice with what appeared to be a serious injury to his right knee.

After he hit the boards it appeared Haula’s right skate was caught in a rut in the ice and he severely twisted his knee. He was taken from the ice on a stretcher and gave a wave to the fans in response to an ovation but he could be on the sidelines for a long time. Golden Knights head coach Gerard Gallant said the extent of the injury was not immediately known.

“You don’t want to see that happen,” Marleau said. “Any time you see that it is not a good thing. It just seemed like a normal hit. I was just rubbing him out after he dumped the puck in and I turned and started going to the bench. I heard the whistle go after that and I turned around and he was on the ice. I just hope he’s okay.”

Opinion
The Vegas Golden Knights are still, somehow, the little team that could
November 6, 2018 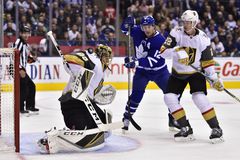 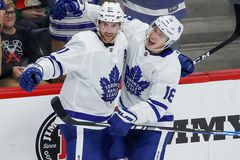 The Leafs' new dynamic duo: Tavares, Marner a hit on the road, now they need to bring it on home
November 4, 2018