At long last, the Toronto Maple Leafs know who they will face in the first round of the Stanley Cup playoffs.

Toronto had to wait for the final game of the NHL’s regular season to learn that the Boston Bruins will be their opponents to start the post-season. A complex series of scenarios meant that the Maple Leafs could face either Boston or the Tampa Bay Lightning, dependent on the outcome of that final game.

Roberto Luongo came off the bench to shut down the Bruins in the third period, and the Florida Panthers dashed Boston’s hopes of getting the top seed in the Eastern Conference playoffs with a 4-2 win Sunday night.

The Bruins will host the Maple Leafs in the first round beginning Thursday night. The Leafs were 3-1 against the Bruins in the regular season.

A classic Original Six matchup, Boston and Toronto have met in the NHL playoffs 14 times, with the Maple Leafs winning eight times.

The two teams last met in the 2013 playoffs when Toronto held a 4-1 lead in the third period of Game 7 of their first-round series but lost to Boston 5-4 in overtime. 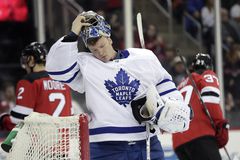 Opinion
The Leafs are vastly better this year as they head to the NHL playoffs
April 6, 2018 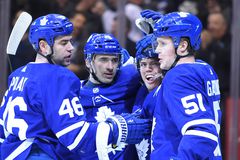