All of the hockey omens were lined up against the Toronto Maple Leafs on Monday night.

They were playing at home for the first time after a long, successful (4-0) road trip, usually when the local heroes lay an egg. The visiting Los Angeles Kings had been laying in wait in Toronto for them for two days and had something to prove after a thumping from the Ottawa Senators last Saturday.

The Leafs also had to give backup goaltender Garret Sparks his second start of the NHL season ahead of schedule because No. 1 man Frederik Andersen stayed home with a knee injury. Andersen was present at the game-day skate but Sparks was manning the traditional starter’s net in the morning session, although the Leafs did not say anything about an injury. That came later in the afternoon with a press release that Eamon McAdam was an emergency call-up from the Newfoundland Growlers, the Leafs’ ECHL team.

Leafs head coach Mike Babcock said after the game Andersen’s injury is not serious. Andersen and his teammates get two days off and then he will start in goal against Sidney Crosby and the Pittsburgh Penguins at home on Thursday.

The Leafs had to reach down to their secondary farm team for a goalie because the Toronto Marlies’ top goaltender, Kasimir Kaskisuo, is injured and backup Jeff Glass is only signed to an American Hockey League contract.

Add it all up and the stars were not aligned for the Leafs. But this is shaping up as a season far from the ordinary and the Leafs shook off a lull in the second period to cruise to a 4-1 win thanks to Sparks, who made 33 saves, and Matthews, who outplayed Kings star centre Anze Kopitar head-to-head. Their record is now 6-1, good enough for first place in both the Atlantic Division and the Eastern Conference.

Sparks, in what is expected to be his first full NHL season as Andersen’s backup, was much sharper than he was in his season’s debut when he let in six goals in Chicago against the Blackhawks but escaped with the 7-6 overtime win. Then again, Sparks grew up in the Chicago suburb of Elmhurst, IL, there were 50-odd family members and friends on hand and the ‘Hawks were honouring a team legend.

Even though Monday’s game was a surprise start, Sparks said he was ready thanks to his work coming back from that bad night in Chicago.

“I would just say steady work every day since that start, getting more comfortable, establishing a routine here, getting back to the process that makes me good,” he said. “Obviously, when you’re starting the season on the road in Chicago, Stan Mikita night, there’s a lot of stuff buzzing around. It was an emotional day for me. [Monday morning] was when I found out I was playing and I prepared myself accordingly.”

The Leafs made short work of the portents, as they scored in the first minute on Kings goaltender Jack Campbell – who did not have a great evening. They extended their lead to 2-0 with a goal in the last minute of the first period and took a 3-1 advantage into the third.

Kasperi Kapanen scored the first goal, Patrick Marleau had the second with his first goal of the season and Mitch Marner had the third one. Then Kapanen and Auston Matthews turned Kings defenceman Drew Doughty inside-out on a brilliant two-on-one in the third period for Kapanen’s second goal of the game. Matthews assisted on both goals to run up his points total to 16 in seven games. Ilya Kovalchuk scored for the Kings.

Matthews and Kapanen, who wound up on the first line thanks to William Nylander’s contract dispute, are looking better with each game. Kopitar, one of the best two-way centres in hockey, and linemates Kovalchuk and Alex Iafallo had trouble keeping the Leafs in sight all evening.

“He’s been a great fit for myself and Patty [Marleau] on the line,” Matthews said of Kapanen. “We’ve been able to create a lot of opportunities offensively. He’s got high-end speed, he’s got skill, he can shoot the puck and make plays and that opens up a lot of space. Every game we develop more and more chemistry.”

Matthews’s two assists made him the fifth player in NHL history to begin the season with multiple points in seven consecutive games. That put him in exclusive company as the others are Mario Lemieux (12 games, 1992-93), Kevin Stevens (eight in 1992-93), Wayne Gretzky (seven in 1983-84) and Mike Bossy (seven in 1984-85).

Kapanen scored 46 seconds into the game when his shot from behind net hit Campbell and bounced into the net. Marleau scored with 22 seconds left in the first period when he froze Campbell with a fake and then swept the puck through the crease and into the net.

Marleau’s goal brought the Leafs’ power-play success rate to an astounding 47.4 per cent over seven games. They were also sharp in killing penalties, although the Kings have been futile in that regard since the start of the season.

When Marner took back-to-back slashing penalties in the second period, the Leafs killed off both of them plus one to Frédérik Gauthier early in the third. That brought the Kings’ power play record to an embarrassing 0-for-21 in six games.

While the Marner penalties led to an extended stay in the Leafs’ zone by the Kings through most of the second period, Sparks held them off. His confidence appeared to grow as the game went on and by the end of the second period, when the Kings held a 24-18 edge in shots, Sparks, 25, was flashing the leather like an NHL veteran.

Matthews wasn’t the only one among the four Leafs who went into the game leading the NHL scoring race who was strutting his stuff. Marner and linemate John Tavares combined with left winger Zach Hyman for a nifty goal at 8:32 of the second period.

Before the game, Hyman was asked why the line was so successful in the early going. He said it was because they all knew their jobs, his being the heavy lifting in the corners.

“Every game we want to get better as a line. We know our strengths and we all try to complement each other,” Hyman said. “For me, it’s doing the things I’m successful at, going to the corners, battling, trying to get the puck back for Mitch and John and let them do their thing.”

But this time Hyman elected to try some fancy hockey, stickhandling the puck around two Kings defencemen in the slot. Then he flipped it to Tavares, who found Marner alone in the crease for an easy goal. 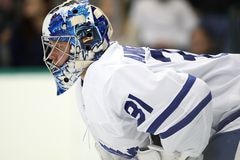 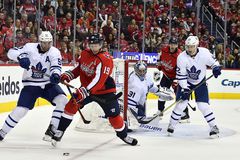 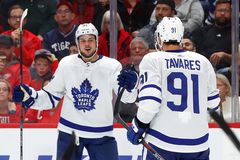