When fans look back on the Toronto Raptors’ series-clinching win on Saturday night, which propelled them to their first NBA final, one exhilarating play will stand out above all others.

Kyle Lowry stole the ball midway through the fourth quarter of Game 6 of the Eastern Conference final against the Milwaukee Bucks, and then chose not to gallop in for a breakaway layup. Instead, he dribbled down and dished off last-second to Kawhi Leonard, who threw down an authoritative running dunk that made the country believe history was just minutes away.

That moment spoke volumes about the dynamic between Lowry and Leonard, and painted a portrait of teamwork, mutual acceptance, trust, and respect.

Lowry, in his seventh season as the Raptors point guard, had been crushed to see his best friend DeMar DeRozan traded away in the off-season. This dunk was perhaps the most exciting in a long line of natural collaborations in these playoffs between Lowry and the player his team received in that trade – a superstar with two NBA finals already on his résumé.

After trailing for almost all of Saturday’s game, the Raptors dug out of a 15-point disadvantage midway through the third quarter and tied it 90 seconds into the fourth. Over the next few minutes, the Raps built a six-point lead. And then came the big sequence.

Toronto’s Fred VanVleet reached in on the dribbling Khris Middleton and Lowry stole the ball, reversing it and dribbling down the floor, chased by Bucks Giannis Antetokounmpo and Eric Bledsoe.

The all-star point guard could have charged in himself for a layup – perhaps challenging with the towering Greek bearing down on him. Instead, Lowry shovelled a short pass backward to the sprinting Leonard.

“We kind of were on a run, and why not feed the big dog?” Lowry said. “I’m always going to look for the guy that I know can finish with the best of them.”

Lunging, Leonard scooped up the ball in stride and leaped into the air with it, sailing over the high-springing Antetokounmpo. With Leonard airborne, Lowry did one more thing that likely went unnoticed by many. The 6-foot-1 Toronto point guard bumped the 6-foot-11 Milwaukee star to inch him slightly off-balance as he jumped up to get in Leonard’s way.

“I’ve been playing with [Lowry] for a while now, and it’s just chemistry right there,” Leonard said. “I know just to keep running with Kyle. If he doesn’t have nothing easy, he’s going to make the right play.”

Leonard’s dunk was both striking and smart. With Antetokounmpo trying to take away his opponent’s strong side, the right-handed Raptors star delivered that critical jam with his left hand.

The Raptors extended their lead to eight points in that moment, and the noise level in the building spiked to its loudest of the night to that point.

“We were on a run, and the building exploded after that dunk,” Leonard said. “Kind of got us a little bit more adrenaline.”

The Bucks immediately called for a timeout, then mounted a mini-comeback of their own, edging back to within a point. But energized by the exhilaration in the air, the Raptors would not surrender the lead. They won 100-94.

Leonard had missed last year’s NBA playoffs, having lost all but nine games to injury last season as a member of the San Antonio Spurs. Joining the Lowry-led Raptors – a perennial playoff contender – gave him an opportunity.

“I ended up coming here with a great group of guys, a lot of talent. And I just strived with them every day. I just kind of bought into their system,” Leonard said. “Kyle helped me a lot with my transition, on the court and off the court, asking him questions, him just pushing me on the floor as well and letting me know what to do in situations when he calls plays. All that hard work just put together; now we’re here and it’s exciting.”

The question was posed directly to Lowry: What is it that made this group capable of doing something that no other Raptors team was able to accomplish? The point guard smiled wide while taking a long meaningful pause and swivelled his gaze obviously in Leonard’s direction before he answered.

“The one thing about Kawhi, he literally stays level-headed all the time. He never gets up, he never gets down,” Lowry said. “I think him and Danny [Green] brought that championship pedigree here, just kind of staying level-headed and even-keeled.”

Leonard’s magnificent postseason has many around the NBA realigning its stars, and considering whether he may be the top player of the moment.

“I don’t care about being the best player. I want to be the best team,” Leonard said. “We’re in the finals, and we’re not done yet.” 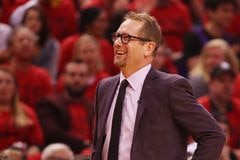 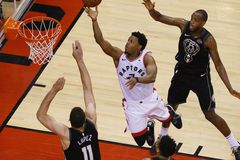 Raptors eliminate Bucks in Game 6, earning their first-ever spot in NBA finals
May 26, 2019