Anze Kopitar and Adrian Kempe scored in the shootout, and the Los Angeles Kings beat the Toronto Maple Leafs 1-0 Thursday night for their fourth consecutive victory.

The combination of defensive brilliance and offensive ineptitude continued in the shootout: Michael Amadio had a largely open net in the second round but shot it into Andersen’s pad — and then Auston Matthews whiffed on the puck on the other end.

Kopitar finally became the first person to put the puck in the net in the third round, but William Nylander matched him. After Kempe scored, Mitch Marner lost control of the puck to seal it for Los Angeles.

The Kings opened a nine-game homestand by extending the longest winning streak of their last-place season.

Toronto has lost on the first two stops of its three-game California road trip.

Nylander then got a breakaway with 1:13 to play, but Quick made a beautiful pad save that prompted Nylander to break his stick on the post in frustration.

The teams opened with two scoreless periods in which Kasperi Kapanen’s first-period breakaway shot off the post was likely the best scoring chance. Both teams had more chances in the third, but Quick and Andersen remained impenetrable.

The game was a homecoming for Leafs forward Kyle Clifford, defenceman Jake Muzzin and goalie Jack Campbell. All three were Kings regulars who made their first returns to Staples Center since getting traded to Toronto over the last 14 months.

Clifford won two Stanley Cup titles while spending the past decade as a dependable two-way forward for the Kings, who drafted him in 2009. Los Angeles traded him to the Leafs on Feb. 5 in a deal including Campbell, the once-underachieving goalie who played his way into an NHL career with the Kings over the past two seasons.

Muzzin was traded to Toronto in January 2019 after nine years with the Kings, who signed him in 2010. Muzzin and Clifford both weren’t yet Kings regulars during the club’s first Stanley Cup run in 2012 but both were dependable regulars during Los Angeles’ second championship season in 2014.

Clifford and Campbell both waved at the LA crowd in response to loud cheers when they were shown on the scoreboard. Muzzin sat out his fourth straight game for Toronto since breaking his hand late last month, and he acknowledged the roars with a wave from the press box.

Trevor Moore also started at centre for the Kings in his first chance to play against Toronto. Moore played 52 games for the Leafs over the past two seasons before the Kings acquired the LA-area native in the trade for Clifford and Campbell.

Kings F Jeff Carter missed his seventh straight game with a lower-body injury. The team doesn’t know when the veteran goal-scorer will return. … Moore signed with Toronto as an undrafted free agent in 2016 and won the Calder Cup with the AHL’s Marlies in 2018. … Toronto D Rasmus Sandin returned to the lineup after a one-game absence as a healthy scratch. The teenager turns 20 years old on Saturday. 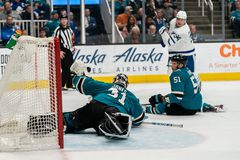