For a good long time it was what the fans love in a Game 7 – wild scoring chances off mistakes and lots of goals with the coaches growing old fast – and then it turned into an all-too-familiar nightmare for the Toronto Maple Leafs.

It was not as bad as the famous collapse in Game 7 against the Boston Bruins in 2013 but it hurt just as much for the players. After fighting their way back from a 3-1 Bruins series lead to force a seventh and deciding game Wednesday night, the Leafs took a one-goal lead into the third period.

That should have been inspiration enough but by then the Leafs were already hanging on, as they had done so often in the last three games of this NHL first-round playoff series. This time, the Bruins took the game a gear higher in the third period to win 7-4 and move on to the second round of the playoffs against the Tampa Bay Lightning.

The Leafs went home to ponder just how this got away. Too many Leafs could not play properly in their own end – hello Jake Gardiner – which choked off their offence and that, along with goaltender Frederick Andersen’s hot hand turning ice cold, made the difference. Plus one other big reason: The Brad Marchand-Patrice Bergeron-David Pastrnak line, which was held pointless in the previous two games, came back hard in Game 7 with seven points.

It was an all-round terrible night for Toronto sports. In addition to the Leafs’ elimination loss, Toronto FC lost the CONCACAF Champions League final to Chivas Guadalajara on penalty kicks and the Toronto Blue Jays lost to the Boston Red Sox. Only the Toronto Raptors managed to win, taking their NBA playoff game from the Washington Wizards.

Torey Krug tied the score a little more than one minute into the third period with the teams playing four-on-four. Then Jake DeBrusk scored his second goal of the game four minutes later for the lead. Pastrnak applied the hammer with 8:21 left in the third period to put the Bruins ahead by two. The Leafs, who were wobbly since the middle of the second period, were finished.

Leafs head coach Mike Babcock, though, insisted he felt good about his team’s chances “because we were set up perfect going into the third. I thought we really played well the last 10 minutes of the second. We used all our people. We were fresh. I thought we were the fresher team, and we were in the driver’s seat.”

Even after Krug tied the score, Babcock said, “we were still in a good spot there. The next one hurt us. We didn’t respond. It was like devastation instead of just playing and executing in the third period.”

A prime example of the Leafs’ inability to figure things out in their own end was Gardiner. He was right with DeBrusk on the game-winning goal but simply did nothing to impede the Bruins forward until after he scored.

“A lot of this game is on me,” Gardiner said. “And it’s just not good enough, especially in a game like this. It’s the most important game of the season, and I didn’t show up. There’s not much I can say, really.

“I saw that [DeBrusk] had a lot of speed, and I didn’t think I could have kept him in front of me, so I turned and skated with him. He made a good play. I’ve got to get a stick on him. It’s going to be a tough one to swallow, that’s for sure. I let a lot of people down.”

Patrick Marleau powered the Leafs at the start of the game with two goals, while Travis Dermott and Kasperi Kapanen scored the others. Danton Heinen, Bergeron and Marchand scored the other Bruins goals.

Babcock juggled his lines at times to get Auston Matthews some time away from the Bergeron line and get centre Tomas Plekanec against them as much as possible. Matthews had a few good moments but the Bergeron line broke out of its two-game scoring slump to make the difference for the Bruins.

Matthews was left with just two points in the entire series and like most of his equally young teammates, realizing they still have much to learn about the NHL post-season.

“I thought the first half of the series my play probably just wasn’t good enough,” he said. “And then the second half of the series [I] had chances. I thought did things right for the most part and couldn’t capitalize on the opportunities. Sometimes that happens. It’s frustrating for sure. You always want to contribute on the scoresheet.” 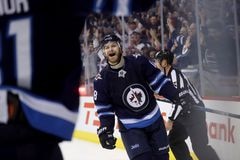 Stastny, Morrow getting the most out their trade to the Jets
April 25, 2018 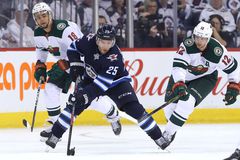 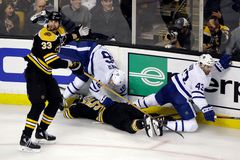