Canada is the only country to finish in the top five of team show jumping at the past three Summer Olympics, a run that includes a silver medal in 2008 and a narrow loss in a jump-off for bronze in 2016.

Canadian riders and horses can vie for the podium again at the 2020 Tokyo Games after qualifying a team at this summer’s Pan American Games in Lima.

The Masters tournament, opening Wednesday at Calgary’s Spruce Meadows, will help Canadian team chef d’équipe Mark Laskin identify who can perform on demand as the athletes turn their attention to earning a spot on the Olympic team.

“Our riders are scattered all over the world in their various bases and generally they all try to compete here at Spruce Meadows,” Laskin said. “It’s a great chance for us to compare apples to apples, and see everyone jumping in the same conditions, the same course specs and against each other.

“The Spruce Meadows Masters is one of the biggest events with the biggest jumps that they’re going to see. If they do well here, it’s really positive on their résumé.”

If his health allows and he continues riding at his current level, Eric Lamaze seems automatic to represent Canada in Tokyo.

The winner of individual Olympic gold aboard Hickstead in 2008 and bronze in 2016 with Fine Lady, Lamaze can add to his more than $6-million in career earnings at Spruce Meadows.

After revealing in May he’d been dealing with a brain tumour for a year-and-a-half, the 51-year-old from Montreal continues to ride, and ride well.

He claimed the Spruce Meadows Grand Prix in June with Chacco Kid.

Lamaze chose not to ride in the Pan American Games, while 10-time Olympian Ian Millar announced his retirement in May.

They, along with two-time Olympian Tiffany Foster of Vancouver, Beth Underhill of Georgetown, Ont., and Millar’s daughter, Amy Millar of Perth, Ont., are in the mix for possible Olympic selection.

But a change in the Olympic equestrian format means it will be tougher to make the Canadian team next year.

Teams will consist of three horse-and-rider combos plus one alternate, instead of the previous four plus an alternate.

Spruce Meadows is the first competition for Ballard and her nine-year-old gelding Fellini since the Pan Ams.

“We are now starting to think about where we want to be to get ready for Tokyo,” Ballard said.

“Any horse that jumps double clean like that as a nine-year-old is very impressive, but I can also say I knew he had it in him.”

Teams in Tokyo will no longer have the luxury the luxury of dropping the worst score and having the top three counting toward the final result.

“No dropped score, and if bad luck happens to a horse we’re basically out right off the bat,” Deslauriers said. “Those horses better be healthy. Riders better be on their game. I think it’s going to be a high-pressure situation.”

Canada won silver in 2008 with just three riders, as one had to withdraw owing to a horse’s injury.

Foster’s horse, Victor, was disqualified during the team event in London in 2012 because of a minor injury.

“We’ve had a lot of practice jumping as a three-man squad. I think we’ll be okay,” Laskin said.

The change was made to make room for more countries to compete in Olympic equestrian without increasing the number of athletes competing in the games.

At Spruce Meadows, a mountain of manure becomes the world’s most beautiful show-jumping venue
September 4, 2019 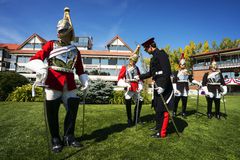