Connor McDavid torched the Chicago Blackhawks early and often, notching his first ever playoff hat trick while leading the Edmonton Oilers to a 6-3 win Monday night in NHL qualifying play.

The win tied the best of five series at one game apiece and redeemed an Oiler team that was roundly criticized after being outhustled, outsmuscled, outshot and outscored by the lower-seed Hawks in game one.

McDavid scored 19 seconds into the game, then notched his second off an electrifying solo rush just past the four-minute mark, and added one more on the power play late in the second period at Rogers Place.

“It was just our work ethic. (We) kept it simple. It sounds all very cliched, but that’s all stuff we didn’t do in game one and did tonight,” said McDavid postgame.

“Connor led the way, especially early (and) set tone for us, gave us a spark. That’s exactly what we needed and everybody followed,” said Ennis.

Given that the rink was fan-free to prevent the spread of COVID-19, arena staff hustled down the stairs and honoured hockey tradition by tossing ball caps over the glass and onto the ice to mark the hat trick after McDavid’s third marker.

Did you like the lid toss? McDavid was asked.

“I found the hats a little unnecessary,” he said. “I’d rather just drop the puck and keep on going.”

Chicago never quit but was always chasing the game, tying it at three late in the second period before McDavid got the hat trick goal to put Edmonton up for good.

“I thought we did a good job tonight. We were in the hole 2-0 early and came back to tie it,” said Chicago winger Patrick Kane.

“I think the confidence in the room was still there that we were going to come back .... (but) once they got the fifth and sixth (goals) it kinda put the game out of reach.”

“I don’t think we made things as hard on them as we did in the first game,” said Toews, referring to Chicago’s 6-4 win Saturday afternoon.

“Early in the game, we were giving (McDavid) some Grade-A chances and he’s not making any mistakes.”

The fans, if there had been any, would barely have settled into their seats when McDavid, standing in the slot, opened the scoring when he took a bouncing loft pass from Darnell Nurse and redirected it into the net over the shoulder of Chicago goaltender Corey Crawford.

At the 4:05 mark, McDavid knocked down a stretch pass in full stride at centre ice and with his trademark world-class speed, turned on the jets, blew past Chicago defenceman Olli Maatta on the backhand and barrelling full speed toward the goalpost, flipped the puck up and over the short-side left shoulder of Crawford.

Midway through the first frame, Alex DeBrincat, circling the net, fed a backhand pass to Kane, who jumped into the play and redirected the puck low stick side on the far side past Edmonton goalie Mikko Koskinen.

Edmonton restored the two-goal advantage less than two minutes into the second period. Ennis, high up in the slot near the blue line, delivered a wrist shot that found its way through traffic and through the legs of a screened Crawford.

Chicago continued to fight back on goals by Slater Koekkoek and Maatta before McDavid scored his third, on the power play, firing the puck along the ice from a sharp angle that deflected off the skate of Hawks’ defenceman Duncan Keith, between Crawford’s legs, and in.

Crawford looked sharp in Game 1 but struggled in Game 2.

Midway through the third period he came out to play the puck behind his net, but bobbled it. James Neal swooped in, stole it and backhanded it into the empty net. Forty seconds later, Alex Chiasson scored from a sharp angle on a goalmouth scramble to make it 6-3.

Chicago’s top line of Toews, Brandon Saad, and Dominik Kubalik, which torched the Oilers for 10 points in Saturday’s win, was held scoreless.

Special teams, the deciding factor in the first game, were muted in game two. The teams combined for six man-advantage goals Saturday, but on Monday Chicago was zero for four on the power play and Edmonton one for five. 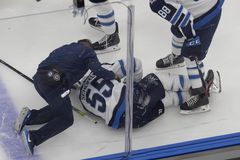