Rory McIlroy managed to block out all the noise, all the distractions, and this was long before he even reached the pivotal three-hole finish at the TPC Sawgrass to win The Players Championship.

McIlroy, more than any other player, has been looked upon as golf’s next big thing in the decade since age and injuries began to slow Tiger Woods.

Jack Nicklaus took to Twitter on Sunday night for memories of the time McIlroy first came to meet with him ahead of the 2010 Masters, and a few months later the precocious 20-year-old from Northern Ireland shot 62 on the final day at Quail Hollow for his first PGA Tour victory.

McIlroy set the U.S. Open scoring record a year later with an eight-shot victory. He had four majors – missing only a green jacket – at age 25.

So with McIlroy approaching his 30th birthday, and with only one victory over his previous 50 tournaments worldwide, the critics took notice. When he played in the final group nine times without winning – never mind that he was at least three shots back on five of those occasions – questions about his ability to close became louder.

His patience was tested when he began this year by playing in the final group in three out of his five tournaments, finishing no worse than a tie for sixth.

But he never showed any hint on panic.

His reaction when he tapped in for par Sunday to win The Players was not much different from when he finished with a par at Bay Hill, a bogey at Riviera, a birdie at Torrey Pines. All of them were good weeks when he looked back over 72 holes. One of them was better than the other because he won a trophy.

“I feel like I’ve managed the first six tournaments of the year very well, even with some noise around me, whether ‘he can’t close, he can’t play on Sundays,’ blah, blah, blah,” McIlroy said. “I’ve just got to do my thing. And if I go concentrate on me, control what I can do, good golf and good attitude takes care of the rest.”

Attitude has been key for McIlroy.

It was important not to get down on himself if he didn’t win, even if everyone expected him to at Wentworth last year and Dubai two months ago.

McIlroy says he has been reading books and working with people to remind himself that golf is a joy to play and provides a comfortable lifestyle – he went over $45 million in career PGA Tour earnings alone – but that it doesn’t define him as a person.

“Who I am as a person isn’t who I am as a golfer,” he said. “And it took me a while to get to that point where I realized who those two people were. So that has been a big thing. And I think that’s been the big difference between the highs and lows of the last few years and the more consistent play. I’ve had two wins in the last 12 months, but even the play in between that has been pretty good.”

Not since 2012 has McIlroy started a year so well.

He won the Honda Classic to reach No. 1 in the world for the first time, had runner-up finishes in Abu Dhabi and the Match Play, was third at a World Golf Championship at Doral and tied for fifth in Dubai. In those five events, he was never more than four shots out of the lead.

Now he has a victory against the strongest field in golf at The Players, which is feeling more and more like a major in everything but the label, to go with a runner-up in Dubai and top finishes everywhere else.

McIlroy had said at the start of the year in Hawaii that he was entering a second phase of his career, even as he has learned to look at the big picture in an Instagram world. It’s one tournament. It’s one month. It’s one season.

Las Vegas installed McIlroy as the latest favourite to win the Masters ahead of Dustin Johnson, who only three weeks ago won by five shots against a World Golf Championships field in Mexico City. Memories are short in golf.

McIlroy has one more start, at the Match Play. Winning doesn’t hurt, though McIlroy is not sure his victory at The Players will help or damage his shot at a green jacket.

“If I go to Augusta with a similar golf game to what I have now, and the attitude I’ve shown over the first few weeks of the year,” McIlroy said, “I think I’ll have a great chance.”

McIlroy headed home to southern Florida with $2.25 million, the lead in the FedEx Cup, his world ranking at No. 4. He left behind the world-class golfer with 15 PGA Tour victories and four majors before turning 30 – Nicklaus and Woods are the only others who have done that since the Masters began in 1934. He will worry about the next tournament when it gets there.

“I’ve got an interior design meeting tomorrow morning to pick out some stuff for our new house,” he said. 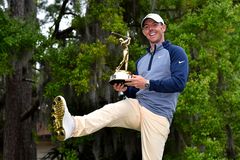