Lousy starts. Too many penalties. Sub-par goaltending. An injury to a key player. An inability to take advantage of a favourable schedule.

All of these things have plagued the Maple Leafs, and for them it adds up to a 5-4-2 start.

It is not what anyone hoped for in a season when expectations are robust.

“We have to reset,” Auston Matthews, probably the least culpable of anyone togged in blue and white, said Thursday after practice in suburban Etobicoke. “It is a bit of a wake-up call.”

The Maple Leafs head into Friday night’s game at home against the struggling San Jose Sharks (3-5-1) having lost their past two games. The Leafs have been unable to string together more than two victories in a row.

Really, there has been little to celebrate and not terribly much to lament, perhaps other than an overtime defeat at home on Monday against Columbus.

It is what happens in pro hockey. There is a long time between October and April, when records become meaningful. The dressing room does not drip wet with sweat over any of this, yet.

"Every year is different,” John Tavares, the captain with a broken finger, said as he sat in front of his stall. “Every year is a journey. It ebbs and it flows.”

Toronto will be without Tavares again at Scotiabank Arena in the first of what will already be its third set of back-to-back games. The Canadiens await in Montreal on Saturday.

Somebody tried to suggest to Mike Babcock that his team’s inconsistent performance might be having to play back-to-back games so often so early in the season.

“Excuses,” the coach said, in the manner of “poppycock.”

There is more to it than that. Things that are disconcerting but certainly not unfixable.

To begin with, the Maple Leafs have fallen behind in eight of 11 games. Having to repeatedly scramble back from a deficit consumes a great deal of energy and leads to failure more often than not.

Highly skilled and even more highly paid players stress the necessity of being ready to go at the puck drop – and then proceed to find themselves in a situation where they have to dig their way out of a hole again.

“Starting on time is something we always mention and [we] haven’t done it," Mitch Marner said. Not to single him out; he was merely the most recent Toronto player to speak to the trend on Thursday. “We have to be ready at the start.”

Of San Jose, which began the season by losing four games, Marner said, “We need to step on them in the first 10 minutes."

The Maple Leafs are 1-2-1 in their past four games. During that span, they have been assessed 36 minutes in penalties to their opponents’ 16. The penalties are caused mostly by a lack of attention to details, and it is unsustainable.

When asked about it, Babcock looked as though he wanted to jump out of his skin.

“All you have to do is put your stick on the puck,” the coach said, incredulous. If he had been wearing a hat, he would have thrown it on the ground and stomped on it.

It is, of course, a bit more complicated than that. But it is not like trying to split an atom.

Matthews, who is not the most loquacious of the Maple Leafs, explained the proclivity for penalties quite succinctly.

“It has been killing us the last three or four games,” he said. “I think it is up to us as a group to hold each other accountable. We are a family, but some time you have to yell at your family.”

Toronto has played two and three games more than some other teams at this point, so that tends to skew the numbers. But neither of its goalkeepers is in lock-down mode yet.

Between them, Frederik Andersen and Michael Hutchinson have a combined save percentage of just below .900. That is nowhere near good enough over the long haul. Hutchinson played better in an overtime loss to the Bruins this week, but has yet to prove he is a reliable backup.

Matthews has churned out eight goals already, but the Maple Leafs have barely kept up with their opponents. They have scored 40 goals and allowed 39. That is the most against in the NHL.

The finger injury will likely keep Tavares out of the lineup for another two weeks, and that has created a void that has not been sufficiently filled. It is not bad luck – it is what good teams must overcome, and do each year.

Despite the multiple back-to-backs, the scheduler has been quite friendly. Twelve of Toronto’s first 18 games are at home.

The team is just 3-2-2 at Scotiabank Arena, failing to rack up points that could prove significant later. The Leafs have earned only 12 of a possible 22 so far – and that is not a pace that will get them in the playoffs. They are not mired in quicksand, but they aren’t kicking up their heels either.

“Sometimes it takes longer for things to come together than people expect," defenceman Jake Muzzin said. “It doesn’t always happen like ‘boom.' There are other good teams out there.“

This is his first full season in Toronto. He understands the expectations of fans in Toronto.

“The pressure is always there to win,” Muzzin said.

But he emphasizes that he isn’t worried. 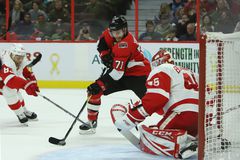 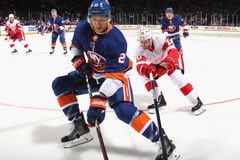 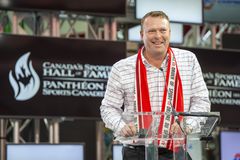