There may come a day when the Campeones Cup – a one-game showdown between the reigning champions of Major League Soccer and Mexico’s Liga MX – will take its place in importance with, say, the CONCACAF Champions League.

But the best that could be said about the very first one, held Wednesday night at BMO Field between Toronto FC and Tigres UANL, was that it was a very pleasant evening. Much more pleasant for the Mexican champs, who avenged a Champions League loss last March at the hands of TFC with a thorough 3-1 whipping of the Reds.

The Mexican side took control in the second half and buried the Reds with two quick goals in the 64th and 66th minutes. Jesús Dueñas, voted the player of the match, scored his second goal to start the brace and the Reds followed two minutes later with an own-goal. TFC managed a goal in the 86th minute from forward Lucas Janson.

The official literature says MLS and Liga MX teamed up to create the Campeones Cup as “part of a larger initiative designed to bring fans together from the U.S., Mexico and Canada in a show of unity while fueling a rivalry between two of the world’s most competitive soccer leagues.”

Well, judging by the first half there is some work to do on that front. Neither side showed a great deal of passion as Tigres took a 1-0 lead in familiar fashion – victimizing the TFC back line.

There was another all-too-familiar feature for the Reds in the first half as well – an injury to a key player. Striker Sebastian Giovinco, who set up TFC’s best scoring chance in the first half, left in the 40th minute due to “calf-cramping” according to a team official. However, it did not appear serious as Giovinco stayed on the bench until halftime.

TFC head coach Greg Vanney did not sound concerned about Giovinco, saying he took his normal treatment after the match and more would be known about his condition on Thursday.

The point was made that the game was a mirror of the Reds’ MLS season – injuries causing a disruption of the back line, which fell apart, and a lack of scoring power up front. The MLS season was another reason the Campeones Cup was a distraction, as the Reds are down to a final gasp to make the MLS playoffs. With six games left in the regular season TFC is nine points out of the last playoff spot in the Eastern Conference and need to win Saturday’s away game against the New York Red Bulls to have any hope of staying in the chase.

“I think the event is interesting,” Vanney said, adding it is hard to find the right time to play it. “It’s just a tough time of year for us right now. That’s just the facts of the situation. At some point we also have to keep in mind we have a very important match on the weekend.”

There wasn’t much to see on the passion front from the fans, either. Then again, the loopy decision to start the game at 8:40 p.m. Eastern time on a school night (U.S. television network ESPN was fingered as the culprit) probably had much to do with that.

The crowd was announced as 14,823 at the 30,000-seat stadium and the organizers knew this game was a hard sell going in. The entire upper deck of the eastern stands was empty because sales for it were closed off.

Since TFC beat Tigres in the quarter-finals of the CONCACAF Champions League back in March, there were attempts to play this up as a heated rivalry. And going into the game the Reds made the appropriate noises.

“I can't wait to play it again,” said TFC striker Jozy Altidore, who played in his first Champions League competition in the spring. “To go to these Mexican teams, fantastic stadiums, everything is upped a notch. Pressure, expectation.

“We relish that, stepped our game up to it. Everybody is itching to have another chance for it. I can't wait to play in [the Campeones Cup].”

Any itch on the players’ part was well-hidden from the fans in a tame first half. Neither side was inclined to take many chances, although the condition of the BMO pitch may have had something to do with that.

The grass looked rough and there were lots of brown spots showing through, as the renowned field crew has found it difficult to overcome the challenge of sharing the field with the CFL’s Toronto Argonauts.

Giovinco, for example, has long complained the wear the Argos put on the field makes him and his teammates susceptible to injuries. He did not look pleased upon his exit from the game.

While Vanney elected to rest midfielder Victor Vazquez, the architect of the offence who has been nursing various ailments all season, he started both Altidore and Giovinco. But the back line was again missing Drew Moor, who sustained a calf injury last week in TFC’s win over the Los Angeles Galaxy.

This meant Michael Bradley once again had to drop back from the midfield to play centre back, with the usual results. In the 36th minute, Tigres defender Juninho lobbed a long perfect pass over the TFC defenders to Dueñas, who had a step on Bradley and beat goalkeeper Alex Bono inside the post.

The Reds’ best – and pretty much only – scoring chance in the first half came on a corner kick by Giovinco. He hooked it nicely into the box but Jay Chapman put his header off the crossbar.

Altidore followed Giovinco out of the game in the 58th minute and eight minutes after that it was all over. The Reds cleared a corner kick but the ball went to Dueñas, who drilled a low shot from 25 metres that beat Bono. Two minutes later, a Tigres cross went off TFC defender Eriq Zavaleta’s foot for an own goal.

At that point, nothing could go right for the Reds. On one of their best chances of the second half, a shot by Chapman in the box hit striker Tousaint Ricketts, who had replaced Altidore, on the backside for his second missed opportunity. Vanney had to admit that, too, was a metaphor for TFC’s season, although that’s all he wanted to say.

“Jay [Chapman] hit the crossbar, Jay bit the back of [Ricketts] somehow,” the coach said. “We found different ways to not finish the way we would like to finish. I don’t think there’s a particular reason and any reason I give would sound like an excuse so I’ll just leave it at that.” 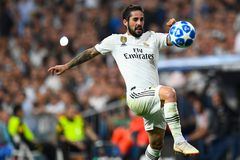 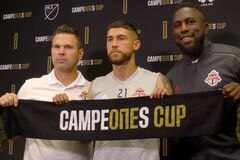 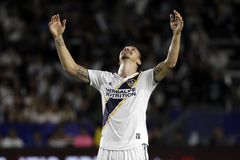