Mighty Heart loves to nosh on carrot greens and has a sweet tooth for mints. He tore the feet off a purple teddy bear, but fancies the plush toys – a snowman and yellow duck – that share his stall. A bit of a rascal, he tugs at his groom’s mask and then steals the comb out of her back pocket when the opportunity arises.

The dark bay colt is the top thoroughbred in Canada, as well as a bit of a ham. When brought out for a meet and greet this week at Woodbine Racetrack, Mighty Heart pricked his ears as he scrutinized a gathering of journalists and then posed for pictures between mouthfuls of grass.

“He loves the camera,” says Josie Carroll, his Hall of Fame trainer. “When he sees one, he goes out of his way to stick his head or nose out.”

On Saturday, the three-year-old with three white socks and a stripe down its nose has a chance to win Canada’s Triple Crown. It is a feat that has not been accomplished since 2003, when Wando captured the Queen’s Plate, Prince of Wales Stakes and Breeders Stakes. Each race is on a different surface and at a different distance, with the third and last on a turf course at Woodbine over a demanding 1 ½ miles.

“It would mean a lot to me to win,” Carroll says. “It is exciting to have a horse that has a shot. It is very seldom that you get a chance.”

Carroll is 62 and in 2006 became the first female trainer to win the Queen’s Plate. She has now won it on three occasions, most recently on Sept. 12 when Mighty Heart posted the second-fastest time since the event was moved to the new track in Toronto’s northwest corner of Etobicoke in 1957.

In all, he has won three of six starts despite losing his left eye in an accident as a foal. Mighty Heart wears a blinker while racing, with a patch to cover the eye socket, so dirt won’t get in, but the monocular vision does not affect him.

“Good horses have something intangible,” Carroll says. “He had that demeanour from the beginning, and had the talent. Now he is maturing after each race.”

A year ago, Carroll says Mighty Heart was so timid he refused to come out of his stall to take a bath. This week, he seemed to enjoy the attention.

“He takes everything in, and then he feels confident,” she says. “You can’t rush him. Everything he does is on his terms.”

Mighty Heart will go to the post as the odds-on favourite in Saturday’s $400,000 ninth race with jockey Daisuke Fukumoto in the saddle. The 23-year-old from Japan has ridden him just twice – and won both the Queen’s Plate and Prince of Wales Stakes.

“When I won the Queen’s Plate, the pace was very fast, and he just kept going,” Fukumoto says. “I never felt anything like that. I feel lucky to ride him. He has changed my career.”

Mighty Heart would be the eighth winner of the Canadian Triple Crown since 1959.

“As an owner, you always hope someday it could happen, and here it is,” says Larry Cordes, who owns Mighty Heart. “Somebody pinch me.”

Cordes, Carroll and track officials are rooting for Mighty Heart.

“I think the industry is cheering for him,” says Jim Lawson, the chief executive officer of Woodbine Entertainment. “It is a tall order. Let’s hope he gets the job done.”

The Breeders Stakes will be held without spectators because of COVID-19. Restrictions imposed by track officials have prevented owners from being on the premises.

Cordes, who bred Mighty Heart on his farm in Uxbridge, Ont., had not seen him for 11 months until this week.

When he did, Mighty Heart nibbled on the back of his head and tried to pull off Cordes’s face mask as he stood beside his stall.

Siobhan Brown is in her first year serving as Mighty Heart’s groom. When COVID began to spread, Cordes originally decided not to ship him to Woodbine.

“I was heartbroken,” she says.

A month or so later, Might Heart arrived in a trailer.

“I enjoy his personality, but I didn’t know what he was going to become,” Brown says. She moved to Toronto from Cape Breton. “I hope he wins. I love him so much, I want him to have the world. He truly is a once-in-a-lifetime horse.”

There are dog toys on every wall in his stall. An apple sits on a shelf beside a jar of mints just to the left of it. When he wants a carrot top, Mighty Heart looks at his groom and stomps his feet. 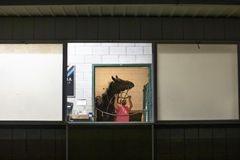 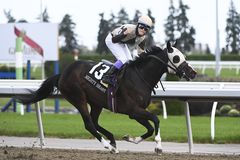