Tim Payton’s family has been Arsenal supporters for generations and he grew up a stone’s throw from the team’s old Highbury stadium in London.

But Payton is so incensed with the team for joining the failed plot to create a European Super League that he wants executives fired, the ownership overhauled and the soccer club sanctioned. “This was the most disgraceful episode in the history of English football,” Payton, 47, said Friday, still seething from the week-long drama. The ESL “was the death of Arsenal as we knew it. It was an abdication of their custodial responsibility.”

For Payton and millions of other soccer fans, the ESL struck at the heart of what makes European leagues so special – the fear of relegation, the joy of promotion and the annual struggle to qualify for continent-wide competitions such as the Champions League. They wanted nothing to do with the North American franchise model the ESL envisioned, in which the same teams compete against each other every year.

“I felt really hurt and upset and sick about all of it,” said Joe Blott, 60, a life-long Liverpool supporter who heads a fan club called the Spirit of Shankly. “Football isn’t a product. You’re born into your football club, mostly because of the community that you live in, and you can’t change that.”

Fans across Europe rose up against the ESL in a massive display of outrage that stunned the league’s proponents – 12 clubs from the English Premier League and the top flights in Spain and Italy. The unprecedented public outcry was picked up by politicians, broadcasters, corporate sponsors and sport governing bodies and it became such an unstoppable force that the ESL collapsed barely 48 hours after its launch.

“It was really heartwarming to see the fan reaction,” said Ronan Evain, executive director of Football Supporters Europe, which represents fans in 48 countries. Those behind the ESL “showed a massive lack of understanding of what football means to our communities,” he added from his home in Nantes, France. “It’s about decades, and sometimes more than a century, of culture built around the football team. You don’t become the most popular sport in the world just for what happens on the pitch. It’s the whole environment.”

One of the leaders of the rebel clubs, Real Madrid president Florentino Perez, argued that the economics of soccer had been badly damaged by the COVID-19 pandemic and big clubs needed to find new ways of attracting younger fans. “Young people are no longer interested in football. Why not? Because there are a lot of poor quality games and they are not interested, they have other platforms on which to distract themselves,” Perez said this week.

Evain and others agree there are problems, but they say the solution isn’t to transplant a North American-style system on to European soccer. “It’s not sport anymore, it’s entertainment,” he said. “It wouldn’t work and it would have destroyed the image of European football.”

British Prime Minister Boris Johnson joined the chorus against the ESL this week by describing soccer as “one of the great glories of this country’s cultural heritage.” And he rejected the concept of the ESL’s franchise system. “I don’t think it’s right [that teams] should be somehow dislocated from their home towns, home cities, taken and turned into international brands and commodities, just circulate the planet propelled by the billions of banks without any reference to fans and those who have loved them all their lives,” he said.

Many of those involved in the failed plan tried to win back support by issuing public apologies for their actions. That included JPMorgan Chase, which had lined up US$6-billion in financing for the league. “We clearly misjudged how this deal would be viewed by the wider football community and how it might impact them in the future,” the bank said in a statement Friday. “We will learn from this.”

But the anger among fans hasn’t subsided. There are growing calls for mass resignations and demands in England for club owners to give up their control. The British government is also exploring sweeping changes to the sport that would give supporters more say in how teams are managed.

“There’s so much wrong with what they did,” said David Johnstone, a Chelsea supporter for more than 50 years who joined fan protests outside the club’s Stamford Bridge stadium this week. He wants to see a shakeup at the club, including the dismissal of chief executive Guy Laurence, who once ran Rogers Communications, and he’s thrilled that fans are finally being taken seriously. “It’s a brilliant, brilliant thing,” he said from his home in London. “Let’s hope they sit up and listen to a few more things that the supporters are concerned about.” 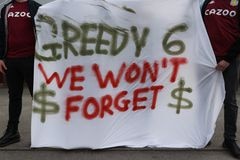 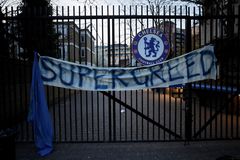