Call it the Thierry Henry effect.

It comes with the territory when someone has played at the highest levels of his sport and won almost every important trophy there is to win, as the first-year head coach of the Montreal Impact has.

No less an authority than Lionel Messi can attest to it, after the two became teammates at Barcelona in 2007.

“The first day he entered the dressing room, I did not dare to look him in the face,” the six-time world player of the year told French sports newspaper L’Équipe.

But to turn around the fortunes of a Major League Soccer franchise that has floundered as of late, failing to make the playoffs since 2016, it’s important that his players learn to look past Henry the player and buy into the philosophy of Thierry Henry the coach.

“You can’t lie – he has his aura,” said Patrice Bernier, the former Canadian international and now one of Henry’s assistant coaches in Montreal. “I’ve seen it myself, but people only see Thierry Henry the player, and I think he always tries to say that, ‘Yeah, I was a player, but now I am a coach. That part of me is gone.’”

Almost six years removed from his final game as a player, Henry has experienced something of a turbulent start to his new career. After being part of the coaching setup for a Belgium team that finished third at the 2018 World Cup, he was handed the reins at French Ligue 1 side AS Monaco, the team with which he began his professional career.

It did not go well. A combination of negative tactics, poor man management and a plethora of injuries saw Monaco win just four games under his control. Henry was fired after just 20 games.

But Montreal gives him an opportunity to change the narrative, to show his development as a coach – and to do so in perhaps a more stable environment than he might find in European soccer.

“The club was somewhere he felt he could really go out and put forth his ideas and see them through, while maybe in Europe the reality is sometimes you’re [only] there for two months, three months,” Bernier said. “Things change – the media pressure, the results.”

The results in Montreal were initially good. After guiding the Impact through the first round of the CONCACAF Champions League with an away-goals victory against Costa Rican side Saprissa, Montreal opened the MLS season with a home win over New England and a draw in Dallas. Given the input of fresh ideas and coaching, players such as forward Maximiliano Urruti began to flourish, with three goals in the first two games after scoring just four in 31 matches last season.

But then the pandemic hit and everything required a reset, culminating in the MLS is Back Tournament in Orlando. The event has not gone as Henry would have hoped. The Impact began with a lacklustre 1-0 loss to New England, followed by a barn-burner against Toronto FC, won 4-3 by the Reds. Montreal will need a win Tuesday night in its last round-robin game against D.C. United to have any chance of progressing to the knockout rounds.

“We were having small signs of progress, of building something,” Bernier said. “We were cut short, and the thing is we are not like … Toronto, [Los Angeles FC], all these teams who had success because the core of the group had been together for some time playing under the same coach, playing under the same principles and ideas.”

There were signs of improvement between the first and second games, however. Unlike in the opener, Montreal dominated possession against Toronto, but a lack of finishing and a number of defensive lapses, particularly in the first half, proved its downfall.

“This tournament will benefit those who make the least mistakes,” Henry said, after the loss to Toronto. “On our end, from a defensive standpoint, we need to rework a few things. The way we moved the ball was positive, though.”

One thing that was greatly improved from the first game to the second was the Impact’s compete level. Coming from someone such as Henry, who has spent much of his playing career holding both himself and his teammates to extremely high standards, that’s hardly surprising.

Former TFC and Montreal goalkeeper Greg Sutton, who played two seasons alongside Henry with the New York Red Bulls, said the base of Henry’s coaching philosophy in Montreal will be the demand that his players compete as hard as they can “every single minute of every single game.”

Those standards can be exacting, Sutton adds, and that can present problems now that he is head coach.

“That’s, I think, the biggest challenge that even these guys will have, too, is because his standards are so high, some of these guys, as hard as it’s going to be, they can’t take it personally,” Sutton said, adding that it’s hard to deny someone of Henry’s stature the right to say those things.

As the record goal-scorer for both the French national team and English Premier League heavyweight Arsenal, Henry has spent time under the tutelage of some of the sport’s most revered coaches, from Arsène Wenger to Pep Guardiola. Whether or not their tactics and viewpoints have rubbed off, though, may be secondary for Henry right now, Sutton said. Man management is a crucial component in the modern soccer dressing room, and while Henry is still learning that part of the job, his former teammate thinks he would do things differently if he were given a do-over in Monaco.

And he will have to balance any playing philosophies he may have with the reality that the majority of Impact players are not top internationals who have been forged in the fiery competition of World Cups and Champions League campaigns.

“He’s going to have a challenge in that aspect of trying to temper himself in certain moments and understanding that he’s not at the top level of world football, and so he can’t expect the top plays to come off all the time, and I think that’s where his challenge will be personally for me,” Sutton said.

He may have gone some way to make himself more relatable to his players before Montreal’s MLS is Back Tournament opener. As the majority of other players and coaching staff have done, Henry took a knee at the start of the game. But he went further and remained down with one first raised for a full eight minutes and 46 seconds, the length of time Minneapolis police officer Derek Chauvin knelt on the neck of George Floyd, causing his death.

Having worked with Henry for more than eight months, since the World Cup winner joined Montreal in November, Bernier said the gesture was in keeping with the character of the man he has come to know.

“He pays attention to these human moments and he takes it to heart, and those moments show the Thierry Henry who cares.” 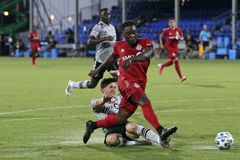 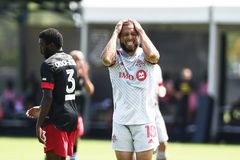 Montreal Impact lose 1-0 to New England at MLS is Back Tournament in Florida
Subscriber content
July 10, 2020 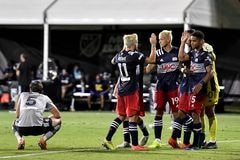