Henri Richard did not have enough fingers and thumbs for all of his Stanley Cup rings.

The great Montreal Canadiens centre, who died Friday morning at 84, had his name engraved on the Stanley Cup as a player a record 11 times, more than his long-time captain Jean Béliveau and more even than his famous older brother, Maurice Richard, in whose shadow he lived all his life.

The younger Richard scored two Cup-winning goals – in overtime of Game 6 of the 1966 final against Detroit and in Game 7 of the 1971 final against Chicago.

The latter came after he had criticized head coach Al MacNeil as “the worst coach I have ever played for.” MacNeil had benched Richard, who complained the unilingual coach discriminated against French-speaking players. The comment was so incendiary that MacNeil received death threats and bodyguards were assigned for the final playoff game at the Montreal Forum.

Days later, as captain Béliveau accepted the Stanley Cup from NHL president Clarence Campbell on the ice at Chicago Stadium on May 18, 1971, it was Richard who was hoisted on the shoulders of teammates.

The playoff declaration was an unlikely outburst from Richard, who was never as impassioned as his outspoken brother. When Henri first joined the team, defenceman Doug Harvey asked Toe Blake if the taciturn rookie spoke English. The head coach replied, “Heck, I don’t even know if he can speak French. He hasn’t said a word yet.”

The younger Richard shared his brother’s razor-sharp jawline and pinched mouth but was smaller (generously listed at 5 foot 7, 160 pounds, measurements likely taken while he was wearing skates and full equipment) and far less flamboyant on the ice. Maurice was Rocket Richard, so pint-sized Henri became the Pocket Rocket.

His brother inspired songs, books, poems, films, cartoons, and even, once, notoriously, a riot. An arena was named for him and, eventually, the NHL trophy for goal scoring. He was héros d’un peuple. A legend. Henri could not, would not compete with that. He mostly went about his business in quiet, determined fashion, overshadowed not just by his brother but by flashier teammates well known by such nicknames Le Gros Bill, Boom Boom, and the Roadrunner.

“I was kind of shy as a kid,” he said in 1986. “I never wanted to say that my brother was Maurice, but everywhere I went – ‘That’s Maurice’s brother.’ But I was hiding. I didn’t want anyone to know, eh. That was my way.”

Henri spent his entire 20-season NHL career with the Canadiens. He retired in 1975 with 358 goals (compared with his brother’s famous total of 544), although the younger liked to point out he rarely got to skate on the power play. More impressive were the 49 goals and 80 assists in 180 playoff games, most recorded before expansion inflated such statistics.

Richard was named once to the NHL First All-Star Team (1958) and three times to the Second All-Star Team (1959, 1961, 1963). He skated in 10 all-star games. His only league individual award was the Bill Masterton Memorial Trophy for perseverance and sportsmanship, which he won in his penultimate season.

The Canadiens adding him to the bleu-blanc-et-rouge pantheon by retiring his No. 16 sweater in a ceremony at the Montreal Forum in 1975. He was inducted into the Hockey Hall of Fame in 1979, his first year of eligibility, as well as Canada’s Sports Hall of Fame in 1992 and Le panthéon des sports du Québec (Quebec Sports Hall of Fame) in 1994. Three years ago, the NHL named him one of the “100 Greatest NHL Players” as part of the league’s centennial celebrations.

Richard was known for his fluid skating, savvy stickhandling and clairvoyant playmaking. Others possessed harder or more deceptive shots, but the diminutive centre had a keen sense for creating the space needed for a small skater to make a play. Long-time observers marvelled at his on-ice manoeuvres even late in his career.

“He takes the puck over the opponents’ blueline and he cuts to the left,” the sports columnist Jim Coleman wrote in 1973. “Then when he has ‘beaten’ the opposing right defenceman, he swings sharply to his right at full speed. He sweeps across the front of the net, from left to right; he draws out the goalie and he shoots the puck at a spot, just inside the goalpost, as his own speed leaves him with a rapidly diminishing target.”

It was a style he developed playing shinny on an unnamed frozen slough and on outdoor rinks in his working-class Montreal neighbourhood.

Joseph Henri Richard was born on leap year day, Feb. 29, 1936, in Montreal to the former Alice Laramée and Onésime Richard, a carpenter from the Gaspé who worked for a half-century in the Canadian Pacific Railway’s expansive Angus Shops in east-end Montreal. The couple were married in the bride’s parish church of St-Enfant-Jésus de Miles End. Henri was the seventh of eight children (Maurice, Georgette, Rene, Rollande, Jacques, Marguerite, Henri and Claude). The family lived in a three-storey, red-brick house in the north-end neighbourhood of Bordeaux. The Richards were known for their dignified stoicism.

Henri first saw his brother, 15 years older, play at the Forum at the age of six. That same year, Maurice left the family home and bought Henri his first pair of skates. The boy played hockey after school and all day on Saturday and Sunday.

Henri was just 15 when he joined the junior Montreal Nationales, the arrival of the small skater disappointing coach Pete Morin, who was expecting the player to be as solidly built as Maurice. The youngster wore No. 9, the same as his brother, which was the subject of Roch Carrier’s famous short story, The Hockey Sweater.

Henri spent three seasons with the junior Montreal Canadiens, twice leading the Quebec Junior Hockey League in goals and points. He matched his brother’s famous 50-goals-in-50 games by notching 56 goals in 54 games in 1953-54.

Henri still had a year of junior eligibility when he attended the Canadiens’ training camp in 1955. He wound up making the NHL club.

“When he was on the ice, no one else had the puck,” Blake told Trent Frayne of Maclean’s magazine. “No matter who I lined him up with, that line always had the best scoring record in a given practice.”

Uncertain whether so small a player could stand the rigours of the NHL, the Canadiens originally only signed him to a three-game tryout so he could retain his amateur status and be returned to the junior team.

Just before he was to make his professional debut, the hard-skating Richard brothers clashed heads in a head-on collision during practice. Maurice needed 10 stitches to close a gash on his face near his left eye, while Henri took two stitches to his right cheek and another two on the chin. Neither missed a game.

After the tryout, the Canadiens signed Henri to a two-year deal. “When it comes to hockey-wise mental equipment, the kid is superior to any prospect I’ve seen since Charlie Conacher came up with the Leafs,” said Canadiens general manager Frank Selke Sr.. “Small, yes, but I’d hate to be in the skates of any opponent who’d dare lay a hand on him while the big brother was there.”

The younger Richard scored against Gump Worsley in his professional debut, on Oct. 15, 1955, as his older brother notched two as the Canadiens defeated the New York Rangers 4-1 at the Forum.

At first, coach Blake kept the brothers on separate lines, fearing the Rocket would give up scoring opportunities to pass to his kid brother. He eventually had Henri centre a line with Maurice on right wing and Dickie Moore on left wing. When the Rocket was injured in 1958, Moore shifted to right wing and journeyman Marcel Bonin took the left. When the line continued to produce goals, it was seen as proof Henri did not rely solely on his brother’s talents. Blake pronounced Henri the fastest skater in the game.

After the game, Blake said, “Maurice, from now on, instead of you looking after Henri, we’re gonna have Henri looking after you.”

For his part, Henri acknowledged he relied on bluffing and the willingness to throw the first punch.

Richard won the Stanley Cup in his first five seasons. The summer after the fifth championship, he fulfilled a dream by buying his own business.

“It was a kid’s dream,” he said. “I wanted to play hockey with the Canadiens and I wanted a tavern. I had no education, or hardly. I finished school in the seventh grade. So that’s what I wanted to do: Play hockey, and after playing my hockey, I’d have my place, a tavern.”

He sold the eponymous tavern in 1986 after his sons told him they did not want to run the business. He had employed his younger brother, Claude, as a waiter.

Richard succeeded Béliveau as captain of the Canadiens, an honour he held until retiring after a broken ankle limited his 1974-75 campaign.

His retirement ended 33 consecutive seasons in which the Canadiens had a Richard brother in the lineup.

It was said Richard balked when a night in his honour was first suggested. “My father worked for 48 years in the Angus Shops,” he told Canadiens general manager Sam Pollock, according to Tim Burke of the Montreal Gazette. “He never missed a day at work in all that time and they never held a night for him.”

The 1974 celebration went ahead on one condition – proceeds would benefit a gymnasium at the St. Arsène Orphanage. The game raised more than $100,000.

Richard died at a residential care home in suburban Laval after a long struggle with Alzheimer’s. He leaves Lise Villiard, a childhood friend whom he married in 1956, three daughters, two sons, 10 grandchildren and four great-grandchildren.

Opinion
Montreal Canadiens’ Henri Richard showed that size was not an issue to become a star athlete
March 6, 2020 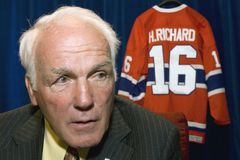 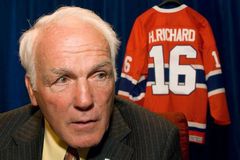 Henri Richard decides to auction his memorabilia
October 13, 2001
Follow us on Twitter @globe_sports Opens in a new window
Report an error Editorial code of conduct
Due to technical reasons, we have temporarily removed commenting from our articles. We hope to have this fixed soon. Thank you for your patience. If you are looking to give feedback on our new site, please send it along to feedback@globeandmail.com. If you want to write a letter to the editor, please forward to letters@globeandmail.com.
Comments