The Montreal Canadiens won one for Claude Julien on Friday, dismantling the Philadelphia Flyers 5-0 to even their first-round Stanley Cup playoff series at one victory each.

The Habs’ head coach was back home in Montreal resting after having a stent placed in his coronary artery in a Toronto hospital on Thursday. He had been admitted late Wednesday night after experiencing chest pains following his team’s loss in Game 1.

Shea Weber, the Canadiens captain, kept the puck after the lopsided defeat of the top seed in the Eastern Conference and will present it to the 60-year-old Julien later.

“It’s hard anytime someone who is part of your team is sick or in the hospital,” Montreal defenceman Ben Chariot said. “Claude steers the ship for us. We are wishing him well and hope he is recovering. We’ll play for him as hard as we can.”

The Canadiens jumped all over the Flyers from the start, built a 2-0 lead in the first period, led 4-0 after two and tacked on the final goal in the last 20 minutes. Tomas Tatar, who had not scored in five previous games in the postseason, had two goals, as did Jesperi Kotkaniemi. Carey Price had 30 saves in the shutout and has stopped 59 of 61 in the first two games.

“Carey is our best player every single night,” Chariot said. “He’s a rock for us and is continuing to do that.”

Associate coach Kirk Muller replaced Julien on the bench. Muller previously was a head coach with the Carolina Hurricanes, but Friday’s victory was his first in the playoffs.

He said Julien was one of the first people to send him congratulations on the win via text message.

“Hey Claude, this one’s for you,” Muller said.

The Canadiens were so dominant that the Flyers’ players were frustrated.

At one point, Travis Konecny, a Philadelphia forward, went back to the bench and tried to break his stick. When Carter Hart was pulled after allowing four goals on 26 shots, the goalie slammed the door shut in obvious disappointment.

Montreal pulled off the biggest upset of the qualification round by eliminating the Pittsburgh Penguins. The Canadiens would not have reached the postseason at all had the field not been increased to 24 teams from 16. The NHL took that step because some playoff positions were undecided when the regular season was suspended on March 12 because of the spread of COVID-19.

Julien and the team welcomed the opportunity to vindicate themselves after winning only 31 of 71 games during the regular season.

The Canadiens came out flying on Friday and scored barely a minute into the game.

Tatar fired a wrist shot past Hart after the Flyers goalie had stopped a backhand from Brendan Gallagher only seconds earlier.

Montreal spent most of the first period in Philadelphia’s end, winning puck battle after battle, and set the Flyers back on their heels. Kotkaniemi put the Canadiens ahead 2-0 with 7:24 left in the first on a wrist shot from in close while Hart was without his stick.

The play was so lopsided that Philadelphia only registered its first shot on the net more than 16 minutes after the puck drop. After 20 minutes, it was outshot 16-6.

“We were flat-footed a lot,” Justin Braun, the Flyers defenceman, told Rogers Sportsnet in an interview during the break between the first and second periods. “We have to be a lot better to get back into this.”

The Canadiens began the second period on a power play that was drawn by Max Domi in the waning seconds of the first. Tatar made Philadelphia pay when he rattled a puck off the post and into the upper left corner after 1 minute 25 seconds. Tatar’s second goal made it 3-0.

The Flyers missed an opportunity to cut into the lead when Montreal was called for two penalties, leaving Philadelphia with a two-man advantage for 98 seconds. The Flyers got off six shots on the 5-3 but all were thwarted by Price.

Joel Armia scored his first goal of the postseason on a wrist shot with 2:03 left in the second to make it 4-0 and end any possible suspense over the outcome. It ended a rough day for Hart after celebrating his 22nd birthday on Thursday.

Kotkaniemi scored for the second time on a power play with 9:35 remaining to end the scoring.

The 20-year-old centre has four goals in the playoffs. During the regular season, he had six in 36 games and was demoted at one point to the Laval Rocket of the AHL.

“Nobody wants to go down [to the minors] but he learned from it,” Muller said. “It made him a better player and you can see it. He deserves all kudos.”

“I know it is one game, but it’s a huge step in the right direction,” Domi said. He said the team’s thoughts and prayers were with Julien.

“I know we are all happy he is doing better,” Domi said. “I’m sure he is proud of our group and the coaching staff. I know he would want us to focus on the task at hand and that’s what we did.”

The next game in the series will be played at Scotiabank Arena on Sunday night. The Canadiens have said that Julien will not be able to rejoin the team for the remainder of the series – or perhaps longer if Montreal gets past the Flyers.

They certainly gave Philadelphia something to think about Friday.

“The players just stepped up and made my job easy,” Muller said. “Everyone played well today.” 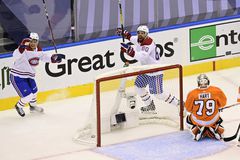 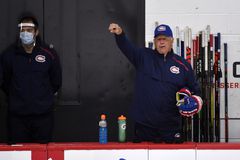