Gary Bettman was hoping to put his feet up, if only for a day or two.

After handing out the Stanley Cup inside the Edmonton bubble to the Tampa Bay Lightning to conclude the pandemic-delayed 2019-20 campaign back in September, the NHL commissioner expected a bit of downtime before taking stock of the league’s next steps.

He couldn’t have been more wrong.

“I laboured under the delusion that … we’d be able to take a breath,” Bettman said on a video conference call with reporters Monday. “When my plane landed back in the New York area the next day after the Stanley Cup was presented, the phone started ringing and we were back at it again.”

Roughly 3 1/2 months later, after negotiations with the NHL Players’ Association, governments and various other stakeholders, hockey is set to get back up and running Wednesday with a shortened 56-game season as COVID-19’s second wave continues to wash over large swaths of North America.

And Bettman made it clear the NHL will have to ready to adjust and adapt to whatever obstacles arise.

“We understand that there is an element of risk, that COVID-19 may impact one or more games,” he said. “We also understand, as we have throughout, that in order to accomplish our goal we’re going to need to be flexible and agile in how we deal with whatever we’re confronted with.”

Unlike the summer, the NHL’s 31 teams will be travelling for road games instead of playing inside the bubbles the league erected in Toronto and Edmonton. There are 213 pages of protocols for players and clubs to follow, but there’s a much greater risk of exposure this time around.

“The protocols are not a suggestion or a recommendation,” Bettman said. “They will need to be done in order for us to address and get through the pandemic, and we will vigorously enforce them.

“We will be guided by the medical experts.”

While Bettman said it quickly became clear the hub cities would be safe for last year’s postseason, the idea of sending players back into a bubble for up to six months was something he “couldn’t even ask.”

But the league has already had to make adjustments because of the coronavirus.

The Dallas Stars have had to postpone at least two games after six players and two staff tested positive, while the Columbus Blue Jackets, Pittsburgh Penguins and Vancouver Canucks have either held team members out of practice or cancelled scheduled activities because of potential virus exposure.

Deputy commissioner Bill Daly said what struck him most about the process of figuring how to play the 2020-21 season – one that will include and all-Canadian division to avoid crossing the border because of pandemic-related restrictions – was the different challenges presented compared with the summer restart.

Bettman said the league is going to play because it’s important for the game, fans and players want it to happen, and games could provide a small sense of normalcy for people.

“It would be cheaper for us to shut the doors and not play,” Bettman said. “We’re going to lose more money at the club level and at the league level by playing than by not playing.”

So how much are they talking in terms of the financial hit to a billion-dollar business that relies on fans attending games – only a handful of teams are likely to have spectators this season – for roughly 50 per cent of its revenue?

“The magnitude of the loss when you add it all up starts with a ‘B,’” Bettman said. “We’re out of the ‘M’ range and into the ‘B’ range.

“That’s just what we have to deal with and that’s what the clubs have decided they’re prepared to do.”

The league continues to investigate what led to the COVID-19 in Dallas, but added it seems to be coming to an end.

“We’re still trying to get our arms around exactly how the spread occurred,” Daly said. “It has turned out to be kind of a classic outbreak, and there may be a variety of factors associated with it.”

He added that although the league has robust measures in place, they’re changing as new information becomes available.

“We learn things every day with respect to the protocols – where they work well, where they can be improved,” Daly said. “We’re making daily modifications, enhancements to the protocol to make sure they’re working as well as they can be, and doing what they’re intended to do.”

FANS IN THE STANDS

The NHL expects three teams – the Stars, Florida Panthers and Arizona Coyotes – to begin the season with a limited number of fans in their respective arenas.

The Blue Jackets and Penguins are other potential candidates, while the Lightning have the okay from local authorities, but announced over the weekend they’ll play in front of an empty building for the foreseeable future.

Bettman said the NHL has included sponsors on helmets this season as a form of “revenue retention” to placate corporate partners because of the lack of fans in arenas and the abbreviated schedule.

But he stressed decals on helmets doesn’t mean corporate logos on jerseys are next.

“I don’t think anybody should jump to conclusions that because we’ve done this, we’re now down a path to do a whole bunch of other things,” Bettman said. “The jury is still out on jersey signage.”

One place where fans definitely won’t be in attendance is Lake Tahoe, Calif., where the NHL announced it will hold two outdoor games Feb. 20 and 21.

The first matchup will see the Vegas Golden Knights take on the Colorado Avalanche before the Boston Bruins meet the Philadelphia Flyers.

“We were looking for a picturesque, magnificent place with a lake and mountains that are snow-covered,” Bettman said. “It had to have a location where we could put a rink where you could get that visual.”

Canada’s NHL franchises ready to get familiar with each other during 56-game sprint
January 22, 2021 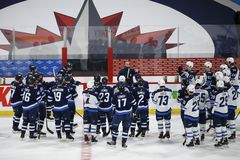 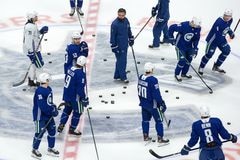 Corey Perry and Loui Eriksson among NHL players placed on waivers ahead of season’s start
January 11, 2021 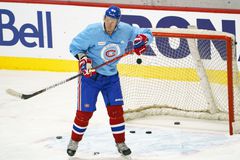