Try to picture our world in eight years time.

Donald Trump is partway through his third term as U.S. President. Shut out of American markets, Canada is moving toward an entirely dairy-based economy. Mexico has given up and built its own wall.

Then the World Cup arrives. Hooray! That’s what starts the war.

That’s one possible, Margaret Atwood-y way of looking at how things will work out. Recent history suggests we should err on the side of disaster.

World Cups seem like an okay idea in extreme foresight. Never great, but okay. They have almost always turned into a terrible one by the time they’ve arrived.

On Wednesday, FIFA rts/soccer/article-fifa-members-prepare-to-elect-host-of-2026-world-cup/">awarded the 2026 World Cup to the so-called “United 2026“ bid of Canada, the United States and Mexico. Because these three countries have never seemed closer.

For the first time in the organization’s history, the vote was public. Because of that, also possibly for the first time, there was no suggestion that voting was rigged.

North America had two things going for it with its World Cup bid. It promised a wildly – some might say hallucinatorily – profitable event. Also, no other sensible country wanted the thing.

The only other would-be host was Morocco – a country with a per-capita GDP in line with Bhutan and Guatemala. I don’t want to tell them their business, but Moroccan taxpayers should be out in the streets lighting off fireworks to celebrate their loss.

In the lead-up, it was suggested that Trump’s shenanigans would cost the continent the bid. But as it turns out, money talks. Even money you don’t like as a person.

The big reveal went poorly. FIFA boss Gianni Infantino – marshalling all the theatricality the Swiss are famous for – blurted out the winner without preamble.

The soccer bureaucrats in charge of the United 2026 bid rose uncertainly from their seats and began hugging one another in an awkward, moving circle. Remember that image. When stadium repairs are running 4,000-per-cent over budget in five years time, it will be used against them.

U.S. Soccer president Carlos Cordeiro seemed in danger of crying as he began his remarks. He should get used to that.

Right now, the feeling is jubilation. Everyone has time-travelled to the future and is imagining themselves in the stands as the world’s biggest sporting event gets under way. And, yes, that will be fun.

What they’re not yet considering are the eight years in between. If we go back just a little ways, the portents are not good.

Germany had such a torrid experience with the 2006 World Cup that when the next host wobbled, they publicly pronounced their intention never to hold the thing again.

South Africa 2010 was meant to be a vast, nation-building effort. It turned into a Ponzi scheme. Several of the venues built specifically for that tournament lie in effective ruins today. The country still hasn’t paid off its soccer debts.

As Brazil 2014 kicked off in Sao Paolo, an angry mob was outside the stadium’s security cordon fighting riot police. This was Brazil, for God’s sake – the game’s romantic home. After regular people had gotten a look at what it was costing them, a clear majority wanted nothing to do with the World Cup.

That won’t happen in Canada. We absorb our defeats much more meekly. And since there is less to gain, there’s also less to lose.

If you’re looking forward to that big-time, England vs. Argentina vibe, belay that hope. Canada will get Canada (as automatic qualifiers). And maybe Azerbaijan or Luxembourg. By 2026, the tournament will have expanded to 48 teams and they’ll be letting anyone in. Canada will get the dregs.

The infrastructure improvements required seem simple, which almost certainly means they will not be. One of the hallmarks of a World Cup is an overweening ambition to do things bigger than they have been done before, which inevitably turns into a financial boondoggle.

Then there is the relationship between the co-hosts. As you may have read, it’s been better.

We may hope that, by 2026, the American leadership has been tilled-over a few times and diplomacy has returned to normal operating temperature, but that’s not certain.

In the interim, you can envision several depressing ways the U.S. administration might turn its new sports toy into an international cudgel.

Trump had to go so far as to send FIFA a signed letter stating the United States would not deter any country or its citizens from attending. No one has ever been asked to do that before. Not even Russia.

Would you be surprised if these three best friends fell to fighting before the event starts? No. Would you bet your next three paycheques they will? Probably.

By this point, that’s an unknown known. There are also the known unknowns.

Eight years is a long time for people to begin wondering about why their money is being used to refurbish perfectly good, existing stadiums. Or who is getting the contracts to do so. Or what major domestic priorities are being put aside to make sure the country looks spiffy for strangers for a couple of weeks a hundred years from now. Get ready for that, because it’s all coming.

So much lead time engenders incentives for governments to run amok. When the bill comes due, they may well be out of office. Then it’s another politician’s problem.

That’s how the World Cup sausage gets made. If North America manages to get most of this right, they’ll be the first.

But right now, nobody’s thinking about that. For the next month, they’ll watch the games in Russia and say, “How lucky are we?” That’s another thing everyone should try and remember. It’s going to be the high point for a long time.

In a short while, Canada and its partners will be confronting the bride’s dilemma – the realization that big parties are great, as long as you’re not the one who has to organize them. 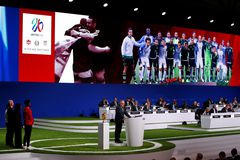 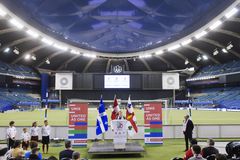 Opinion
‘This is problem’: Welcome to the World Cup nobody wants, not even Russia
June 13, 2018 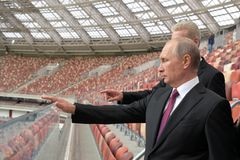