Penalties are up more than 17 per cent over the same time a year ago and are playing a substantial role in several series. Through 19 games in the first round, there have been nearly 10 penalties a game. Last year, there was an average of eight penalties called through 20 games.

“The penalties that have been called in the series so far is an indication of how the referees are calling the game,” Pittsburgh coach Mike Sullivan said Monday. “They’re calling it as they see it. I think discipline is of the utmost importance.”

While the two-time defending Stanley Cup champions haven’t been perfect in that regard against Philadelphia, they haven’t been derailed by a lack of discipline. Around the rest of the NHL, penalties and the ensuing power-play goals are making a big difference: There have been 38 power-play goals through Sunday’s games compared with just 21 in 2017.

The NHL wants officials to call playoffs at the same standard as the regular season, which is happening with penalties actually going up from the first period through the third. Each of the 10 pairings of referees working the playoffs has at least one who has worked the Cup Final, so the hope is having that experience helps maintain consistency.

The Washington Capitals blew two-goal leads in back-to-back overtime losses on home ice to Columbus because of ill-advised penalties and go into Game 3 on the road (7:30 p.m. EDT Tuesday, NBCSN) knowing it’s a problem that needs immediate fixing.

“We need to be a little smarter,” centre Nicklas Backstrom said. “We need to play with better discipline – especially when we have the lead twice. ... It’s obviously going to hurt you in the playoffs. That’s the way it is. It’s just fact.”

Nine of the 14 regulation goals in the Washington-Columbus series have come on the power play. The Blue Jackets, who surged into the playoffs by not taking a lot of penalties to tax one of the worst special-teams units in the league, lead the playoffs in penalty minutes a game.

Coach John Tortorella said the Blue Jackets “have to cure that” because it’s too dangerous to keep taking so many penalties. His players know it even if they’re unsure of the standard.

“We need to stay out of the box, but you never know what’s a call and what’s not anymore,” forward Cam Atkinson said. “But that’s the game right now.”

In the West, where Winnipeg leads Minnesota 2-1, the teams realize how tight things are being called.

The Wild took five penalties in the first 31 minutes Sunday night and stymied the Jets’ power play in a 6-2 comeback win. The teams combined for 19 penalties – including some fights and misconducts – in the second game of their series.

“We’ve just got to watch taking penalties,” Minnesota coach Bruce Boudreau said. “Both teams were really emotional at the beginning and you’ve got to worry about taking penalties and getting behind the eight ball.”

It’s chippy between the Golden Knights and Kings, too, with Vegas up 3-0 going into Game 4 (10:30 p.m. EDT Tuesday, NBCSN) in Los Angeles. All three games so far have been decided by a goal, L.A. defenceman Drew Doughty was suspended for an illegal check to the head of William Carrier and Kings coach John Stevens is none too happy about a missed call on Vegas forward Erik Haula for hitting Anze Kopitar in the face with the butt end of his stick Sunday night.

“We get a guy suspended for making a hockey play, and he butt-ends one of the best players in the world in the face,” Stevens said. “That’s an intent-to-injure play.”

Los Angeles is the most recent team to come back from a 3-0 series deficit, doing so in 2014 against the San Jose Sharks on the way to winning the Stanley Cup. Stevens, who was an assistant four years ago, said his team has “had some resilience all year,” and the tightness of the games against Vegas combined with the excellence of goaltender Jonathan Quick certainly makes an turnaround possible.

The Jets lost Tyler Myers to a lower-body injury that coach Paul Maurice thought was avoidable, and the big defenceman’s status is uncertain going into Game 4 (8 p.m. EDT Tuesday, CNBC). Young Tucker Poolman could draw into the lineup in place of Myers if necessary.

The Capitals won’t have forward Andre Burakovsky for at least Games 3 and 4 in Columbus because of an upper-body injury. Coach Barry Trotz said Burakovsky is going to “miss some time” after being crunched into the boards by Boone Jenner in Game 2. Speedy winger Jakub Vrana, a surprise scratch for Washington on Sunday, goes back in for Burakovsky.

Trotz said he has decided who will start in goal for the Capitals in Game 3 but hadn’t yet told Braden Holtby and Philipp Grubauer. After Grubauer allowed eight goals on 49 shots before being yanked at the second intermission of Game 2, the smart money is on Holtby, the 2016 Vézina Trophy winner.

Linesman Steve Barton, who was injured when he inadvertently clipped skates with Blue Jackets forward Josh Anderson and had to be helped off the ice by trainers, dislocated his kneecap and tore a quadriceps muscle in his left leg. Barton will require surgery but didn’t tear ligaments in his knee, which doctors said is good news because they expect him to make a full recovery. 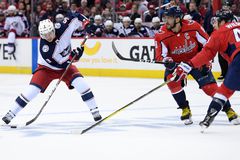 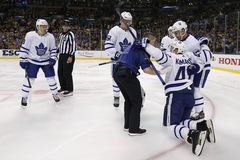 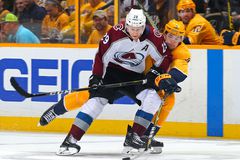