Cathal Kelly
Published May 7, 2021 Updated May 11, 2021
For Subscribers
Comments
Text Size
Please log in to listen to this story. Also available in French and Mandarin. Log In Create Free Account

It’s been a weird year. All the normal routines have been busted up. So in the spirit of trying new things, I decided to outsource Mother’s Day to John Gibbons.

The former Blue Jays manager has that elaborate-courtesy-by-way-of-ol’ El-Paso thing. I’ve never met anyone who wasn’t charmed by Gibbons, even the guys he got into fistfights with.

My boss – also a former baseball beat writer – noticed that Gibbons had joined memmo. It’s an online service on which you can pay someone famous, semi-famous or totally unfamous to record a custom video greeting.

For the price of just one 30-second flirt with Billy Dee Williams ($300), you can get the manager with the second-most wins in Jays history to elaborately and individually congratulate five nieces and nephews on their high school graduations.

The boss asked me to contact Gibbons. I let Gibbons know I was headed his way. I told the boss what I’d done. He told me he was kidding. I’d already spent the money. And so here we are.

My instructions to Gibbons were this – my mom does not watch sports. The furthest her interest in sports extends is very occasionally reading this column out of parental inertia and then saying something like, ‘You seemed very cross with the basketballers this weekend.’ As though it’s my fault the Raptors are terrible. I don’t pick the team, Mom.

My mother does not watch sports, and that includes baseball. As they say in the trade, she doesn’t know if the ball is stuffed or inflated. She would not recognize any baseball players. She probably thinks Derek Jeter was on Friends (though she has never seen Friends). And she definitely does not know who you, John Gibbons, are.

Having said that, I left it to Gibbons’s discretion.

A day later, memmo sent me the results. It is a masterpiece of baffled, good-humoured sportsmanship.

The set dressing is also spot on. Gibbons appears in what I assume is his living room, flanked by – I’m not kidding here – two moody portraits of cowboys astride horses. Do Texans get these delivered each year as a thank you for paying their house taxes?

“Hi Margaret, this is John Gibbons down here in San Antonio, Texas. You’re probably wondering – who the heck is that?”

Gibbons was cordial. He told a story about how I always wore a “sport coat” to games. That is not usual sportswriter attire.

“He dressed up real nice,” Gibbons said. “Everyone else looked like me.”

That is all you need to know about the professional culture of those three sports distilled aesthetically.

Gibbons went on for longer than he had to. He was sincere. Amidst all his colleagues at every level of professional sport, sincerity was Gibbons’s superpower.

But the pièce de résistance – he brought flowers.

“Where you’d get those flowers?” I asked Gibbons afterward.

Actually, the first thing I asked him is what he’s been up to.

“I’m just spending all that money I’m making on my videos,” he said. Then I asked him about the flowers.

“I cut them out of my back yard,” Gibbons said.

If memmo could figure out a way to charge more for custom floral arrangements, I’m sure it would. But Gibbons offers this service free to professional acquaintances.

In the typical Gibbons way, he wasn’t sure exactly how he got on the video-greeting rocketship to riches. Someone called him. He can’t remember who. But it piqued his interest. He’s only been on there a few weeks. Business has been picking up lately. He does three or four a day.

“Charity money,” he calls it, though I’m not sure if he means he gives it to worthy causes, or people think he needs a helping hand.

Me, I would find this sort of thing exhausting. It must be a grind coming up with new ways to say the same thing, knowing everyone expects something unique and remarkable.

“You know me, dude,” Gibbons said. “I can throw some heavy bull every now and then. Tell the same story over and over again.”

That’s not quite true. I’ve heard a few of Gibbons’s stories through multiple tellings to different audiences. They get better each time.

Gibbons got remarried recently. He’s doing some scouting for Atlanta, where his old pal and former Jays GM Alex Anthopoulos is in charge.

“Loving it,” Gibbons says of hanging out at high school and college games, where people also aren’t quite sure who he is. That’s how he likes it. Because when he does announce himself, it can get intense.

“Parents push these things so much nowadays. A lot different than when I was coming up,” Gibbons said. “It’s a little bit out of control, to tell you the truth.”

I considered showing the video to my mother early in order to get her comments. But I don’t need to. They will be, in order, “What is this exactly?”; and then, “Who’s this fella again?”; and then, “Oh. That’s lovely”; and then put the kettle on. She may wonder – not for the first time, though she has never said it out loud – how the people you know sometimes turn out a little odd.

John’s mom, Sallie, apparently isn’t much of a baseball fan, either. She got interested when her youngest son started, you know, playing it professionally in New York. Which has got my story beat by a mile.

Sallie, who’s still trucking in that way moms do, threw out a first pitch a couple of years ago at a Jays’ game. Gibbons was the catcher.

Maybe he can fix me up with something like that next Mother’s Day.

Opinion
Aaron Rodgers is fuelling the latest Packers feud – he should be smarter than that
Subscriber content
May 5, 2021 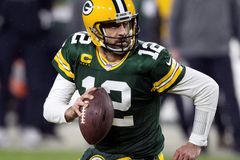