On the day before the Toronto Raptors season gets under way, Fred VanVleet was scolding the media for their presumption.

“Some of the stories that come out [of preseason] are so bad because there’s no action. I just want to get back to action.”

“I ain’t said I been reading them,” VanVleet said, suddenly suspicious this was an elaborate set-up instead of a scheduled news conference. “See how you do?”

Where’s the Fred Sr. everyone fell in love with in the spring? What happened to Mr. Easygoing Midwest?

Those duties have now been assumed by Serge Ibaka, formerly the surliest man in the NBA. Apparently, Ibaka is rededicating his life to “having fun,” which is a little like a wolf rededicating its life to vegetarianism.

Everywhere you look on this team, the personalities have flipped. OG Anunoby, the Harpo of the group, is suddenly chatty. Kyle Lowry is statesmanlike. Coach Nick Nurse has gone from Mr. I-Can’t-Believe-They-Gave-Me-This-Job to a G-rated Bobby Knight (Asked if he is happy with the team’s new arrivals, Nurse said, “Not really.”).

A title doesn’t just change things. It changes people. Under the code of all professional team sports, everyone associated with the Raptors organization has jumped into the championship gang. They’re different from the rest now.

Which makes Pascal Siakam a charming outlier – which is one of his talents.

A lot of things have changed for Siakam in the past few months. You might argue more so for him than just about anyone in the human race, rather than just the NBA.

On Monday, he signed a four-year contract that makes him preposterously rich. The minimum he will receive from the deal, which kicks in after this season, is US$130-million. Essentially, the money that was meant for Kawhi Leonard goes in Siakam’s pocket instead.

Siakam, 25, only began playing basketball eight years ago. He’s from Cameroon – not exactly the Bronx of Africa, basketball-wise.

When Toronto drafted him with the 27th pick three years ago, it was considered a flier. For a year or so after that, it was looking like a worthwhile risk that, sadly, wouldn’t work out.

If there are sudden rises in sports, Siakam’s was more like a missile launch. It’s only just broken the atmosphere.

He came into his triumphal presser dressed head-to-toe in gear emblazoned with his personal logo, which is meant to be a heart formed out of his initials. It looks more like an aortic dissection, but now he has the cash to hire a top-drawer graphic designer.

On Monday, he talked touchingly about his father, who died in a car crash five years ago. He said he’d spent the drive in that day imagining a conversation with him about everything that’s happening in his life.

“Obviously, he would be proud of me,” Siakam said. “I just wish he could say that to me.”

You don’t get many honestly affecting ‘aw, geez’ moments in sports any more, but that was one of them.

He had a great deal of trouble summing up where his head’s at, which seems very healthy. Where would your head be at if you’d just secured the financial future of the next three generations of your family?

And after all those good vibes, here comes the hard part. This franchise’s future is now roped at the waist to Siakam’s development.

Giving him the money now, rather than waiting until the decision had to be made next summer, means the Raptors will not be in the big-time free-agent market until after the 2020-21 season. That’s two years of new status quo – that the Raptors will get only as far as Siakam takes them.

It puts you a little in mind of the euphoria that greeted DeMar DeRozan’s 2016 decision to forgo all free-agent meetings and take Toronto’s offer. That heady adventure also lasted two years. It didn’t go so well.

Siakam isn’t DeRozan. He is a more impactful player. His inside-outside style better suits the modern game. He has more talent around him than DeRozan had. Most importantly, he appears better equipped to handle the pressure of being a franchise’s QB1.

The negatives are more philosophical – the idea of what a superstar looks like in Toronto has never been more unforgiving.

For a long time, all a basketball player in this town had to do was be like Vince Carter – win a slam competition, look fun on highlight reels, say something about loving Canada. Nobody actually expected you to win, because, you know, come on. It’s the Raptors.

Siakam is expected to win. Maybe not this year. But certainly by next year. And absolutely, most definitely by the year after that.

That’s the one downside of championships. Having got hold of one, people expect more of them.

Figuring out how to get another is no longer Lowry’s problem, or Nurse’s problem, or Masai Ujiri’s problem. It’s Siakam’s problem. Because if he ever tries the old “you can’t do this on your own” line, someone will spit back, “Kawhi did.”

Which is why his performance on Monday offered hope. He didn’t seem puffed up by his change in fortune (often a symptom of early onset apathy). He was very much as he has always been. He told a story about VanVleet coming to him to ask about a TV commercial they’d agreed to co-star in.

“You sure you still want to do it?” VanVleet said, according to Siakam.

“I’m still on a rookie contract,” Siakam said. “I need the money.”

That one brought down the house. Siakam was bent over from laughing.

If he’s still able to laugh that way in two years’ time, the Raptors’ money will have been well spent. 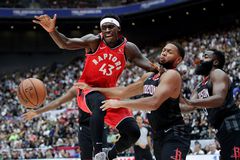 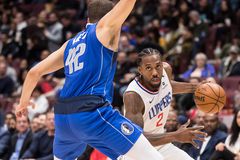