Speed, naturally, but the Toronto teenager also hopes to find elements in her races that require repair ahead of the 2020 Summer Olympics in Tokyo.

If that happens, Oleksiak will know where she can find more speed.

“I want to have good times this summer and be as close to personal bests as possible, obviously, but if I on top of that can have a bunch of things I need to fix, then I know going into the Olympics I’m going to be better,” Oleksiak explained to The Canadian Press.

“I hope I come out of that looking at videos and I can notice I need to fix a bunch of things on my turns, on my starts, on everything, so I can move forward.”

Winner of Olympic gold and silver at the 2016 Games in Rio, the 19-year-old Oleksiak leads a powerhouse women’s swim team into the World Aquatics Championships opening on Friday in Gwangju, South Korea.

Canada will send 31 swimmers, 10 divers, a pair of high divers, the women’s water polo team and an artistic swim team to Gwangju. The water polo team is ranked No. 8 in the world.

Canada ranks 11th all-time among countries in medals won at the world championship with 111, including 21 gold.

Diver Jennifer Abel of Laval owns eight of them. She’s tied with retired diver Alex Despatie and swimmer Ryan Cochrane for the most medals won by a Canadian.

Abel will have opportunities to set the record competing in both springboard and synchronized springboard.

World champion backstroker Kylie Masse and Taylor Ruck, winner of eight Commonwealth Games medals in 2018, join Oleksiak among Canada’s ones to watch in the pool.

“All of us are trying to work towards being one of the best women’s teams in the world,” Oleksiak said.

She and Ruck, both 16 at the time, helped Canada win a pair of relay freestyle bronze medals, making Oleksiak the first Canadian to win four medals at a single summer Games.

“I feel after the Olympics everything got very overwhelming for me,” Oleksiak said. “I was very kind of down on myself. I had a lot of pressure.

“I wasn’t happy if I wasn’t beating the times I went at the Olympics, but now, I’m just kind of ready to go to worlds, have fun and see where I’m at for next year.”

Her time of 58.10 seconds was a world record for a year until American Kathleen Baker lowered it to 58.

So Masse will be looking to shave those elusive hundredths of a second off the stopwatch again in South Korea.

“The start, the underwater, the stroke itself and just nailing the turn and the finish will get you those extra hundredths of a second,” Masse said.

The 23-year-old from LaSalle, Ont., says the Gwangju pool is a special place for her.

The world university games there in 2015 were her first senior international meet, and where she raced in fewer than 60 seconds for the first time.

“Any time I get a chance to get up and race, especially at a big championship or Games, it’s so exhilarating to hear the crowd and be representing Canada and to have people cheering for you,” Masse said. 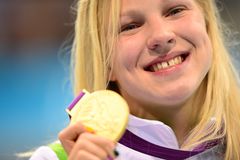 Penny Oleksiak gets back in the pool after a much-needed break
April 2, 2019 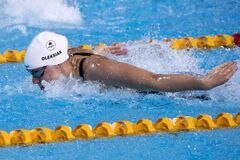