After the crowd had spilled out of the building following Canada’s celebratory Davis Cup victory, there stood rookie Félix Auger-Aliassime on the court in his underpants.

The 18-year-old Montrealer had remained on the bench as Canada beat the Netherlands in their World Group tie this weekend. But he did get on the court for his team-initiation exercise after it was all over. The young rising star laughed and scrambled sheepishly about the court in his underwear while his snickering teammates cheered him on during a few friendly points of tennis with the retiring Daniel Nestor.

The moment of silly, juvenile, boyish camaraderie was a little symbolic, too – Nestor figuratively handing off the baton for the next era of promising Canadian tennis.

A team widely called the best Canadian Davis Cup squad had just captured the tie with Milos Raonic’s second win of the weekend, 7-6 (4), 6-3, 6-4 win over Scott Griekspoor. His victory in the fourth singles rubber gave Canada the comfortable 3-1 win in the best-of-five tie, eliminating the need to play the fifth rubber.

With the victory, Team Canada retains its place in the World Group – the upper echelon of Davis Cup – with a chance to play for the title in 2019, when the new competition format begins. Canada is likely to play its next tie in February.

Griekspoor was a surprise participant in the action on Sunday in Coca-Cola Coliseum at Toronto’s Exhibition Place. In what was a bit of a buzz-kill for the event, the Dutch team, down 2-1, made a substitution an hour before the day’s first match, swapping out its best player – world No. 44 Robin Haase – a veteran of 22 Davis Cup ties. Haase had aggravated his knee in his dramatic five-set loss to Denis Shapovalov on Friday night, and was not yet well enough to play Sunday. So world No. 224 Griekspoor – a Davis Cup first-timer – was thrust into action to try to save the Dutch.

Griekspoor put up a good fight against Canada’s world No. 20. The Dutch player broke Raonic early in the first set, as the 6-foot-5 Canadian stumbled around with some unforced errors at the net, and Griekspoor elevated his own level. Raonic broke right back, but needed a tiebreak to escape with the first set.

The match lasted 2 1/2 hours and provided some light theatrics. But ultimately, Raonic delivered 23 aces and took care of business for his team, then took his time working along the long line of men in red Team Canada jackets to celebrate with each one.

Canada’s celebration though, was a little subdued. Far more is expected from this deep collection of Canadian players now.

Raonic was prompted to recount his own rookie Davis Cup team initiation, which he said involved dancing by himself in front of a crowd of 3,000 people to a song of his choosing. He picked YMCA.

“Mine was a whole lot worse than Félix’s,” Raonic laughed. “I think it traumatized me for the first two years of my career, but I’m glad it built up my confidence and character. Hey, it made me a part of who I am today.”

This tie in Toronto had been filled with intriguing narratives. There was Raonic playing for his country for the first time since 2015; Auger-Aliassime getting the first of many calls he’ll get to the team; the staging of Davis Cup in downtown Toronto; and Shapovalov treating the crowd to his first five-set comeback victory, from down 0-2, making for a thrilling Friday night finish.

This Davis Cup also included an emotional sendoff for Nestor, the retiring 46-year-old doubles star, Canada’s most decorated tennis player and its long-time locker-room Davis Cup leader. He played his final match – a loss with Vasek Pospisil for which Nestor blamed himself and openly questioned whether Auger-Aliassime should have played in his spot. All of his teammates spoke at length about his influence on them. Nestor’s induction into the Canadian Tennis Hall of Fame took place on court, with a video tribute that revisited his 28-year-career and included poignant sendoff messages for the popular Tour veteran, from tennis giants around the world, such as Stefan Edberg, Roger Federer and Andy Murray.

“You guys have lots to look forward to,” Nestor said as he addressed the crowd and glanced at his Canadian teammates. “These guys are going to be Davis Cup champions real soon.” 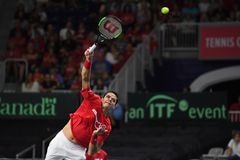 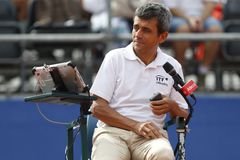