In the more than three months since the Toronto Raptors stepped off the court, the players have been scattered abroad.

Besides regular weight checks and virtual workouts, it’s been on them to stay in shape in less than ideal conditions. In these unprecedented times, many players said it’s been the longest they’ve gone without playing.

Coach Nick Nurse – who had noticed a few weeks ago how fit Marc Gasol appeared on team Zoom calls – still didn’t know what to expect when his team convened last week in Naples, Fla., to hopefully resume their quest for a second consecutive NBA championship.

“Players look fantastic, I mean absolutely,” Nurse said on a conference call Tuesday. “When you see them with the eyeball test, they look great.

“They love to play, they’re concerned about getting better individually, about their own careers, it just seems like they are doing a really professional job. I just think there is a strong love of the game there for a lot of these guys.”

Gasol, who missed 28 games this season with a hamstring injury, and veteran guard Kyle Lowry have looked noticeably leaner in recent photos circulating on social media.

“The chiselled Marc. Cut up. He looks great,” Nurse said of the big Spaniard.

Nurse said as highly as he already thinks of the cerebral Gasol, his improved fitness is motivating for Raptors teammates, might get him a few more rebounds a night and could give his legs more life down the stretch of games.

“If his conditioning improves him as a player, it’s going to be a super added bonus for us,” Nurse said.

“I make fun of him all the time, looking like a soccer player in Barcelona,” Powell laughed. “He looks great, man, he’s moving great, he’s feeling great.”

Powell and Gasol have a tennis match scheduled for the next couple of days.

“Hopefully I’ll still be able to give him a run for his money,” Powell said.

Because of Canada’s requirement of a 14-day quarantine period for people entering the country, the Raptors were the first team to arrive in Florida ahead of next month’s restart at Disney World.

Despite the Raptors’ positive mindset, Powell said there was some trepidation travelling to Florida, which has seen a startling surge in COVID-19 cases. The more than 6,000 new cases reported Tuesday pushed the total to more than150,000 in the Sunshine State. Deaths have climbed past 3,500.

The NBA announced last week that 16 players had tested positive for the coronavirus. ESPN reported Tuesday that the Nuggets had closed their practice facility after positive tests within Denver’s group travelling to Orlando.

Brooklyn’s Spencer Dinwiddie and DeAndre Jordan have also tested positive. Jordan won’t be with the team when it resumes play, while Dinwiddie is still experiencing symptoms, so his status is uncertain.

Powell said he’s not particularly concerned about his well-being or that of his teammates, because the Raptors are following coronavirus safety guidelines “to a T.”

“I’m concerned about it just from a general standpoint of numbers increasing,” Powell said. “Outside [the NBA’s planned quasi-bubble], I’m very concerned about just how dangerous it is. I’m more concerned about my family members that are out, having to deal with going out in public, going back to work and putting themselves in danger of catching the virus.”

A week into what could be three months in Florida, Nurse said the Raptors have managed to stave off homesickness and boredom.

“The first week has gone by in a snap of a finger. That’s a really good sign,” he said.

The coaches are up early, and spend all day in the gym, with players arriving in staggered groups of four to practise – one player and two coaches a net.

The team had a barbecue recently. They play Ping-Pong and pool.

“There are a few other things we’re trying to mix in, too. I don’t really sense much anxiety or people worrying about, ‘Man, this is going to be a long time,’ ” he said. “They seem really good. You can ask me that again in a month if you want. I’ve said that a lot, how much I’ve missed coaching these guys. I just sense that these guys like being around each other and like to play.”

The Raptors were 46-18 and second in the East when the league shuttered on March 11. They tip off the restart on Aug. 1 against the Los Angeles Lakers, and face among the toughest eight-game seeding schedule of the 22 teams that will be in Orlando.

“I like the schedule, I think it’s great to see the Lakers again, [No. 1] Milwaukee again, just to get a feel for them again,” he said. “We’re playing really quality teams, I think every team we’ve got is a playoff team, so that’s going to be obviously those are good teams, so I like it.”

Raptors settle into a new reality as NBA gears up for return
June 29, 2020 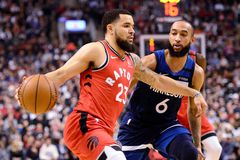