All eyes were fixed on enigmatic NBA superstar Kawhi Leonard on Monday as he was introduced for the first time as a Toronto Raptor. But it was his friend Danny Green who brought some personality to the stage.

Green was the other player in the stunning summer trade that sent Leonard to Toronto from the San Antonio Spurs, in exchange for beloved long-time Raptor DeMar DeRozan, Jakob Poeltl and a first-round draft pick in 2019.

Green was a three-point threat and a fierce defender for the Spurs. He brings championship experience from San Antonio and the University of North Carolina. But the likeable 31-year-old shooting guard might also be the most valuable link the Raptors have to Leonard, the one-time NBA Finals MVP who is intensely quiet and private.

At Monday’s media day, the two new Raptors stepped to the podium together alongside team president Masai Ujiri, Leonard looking anxious and Green holding an easy smile. Leonard was instantly peppered with questions about how he felt about being traded to Toronto. Among Leonard’s first answers was, “Happy that Danny was coming with me.”

Three straight minutes of questions flew at Leonard before a reporter asked the easygoing Green to chime in.

“Ah, you included me, okay! I was wondering if I was gonna get to talk today!” he said with a laugh, adding some much-needed levity to the room.

“The last couple of years in San Antonio, we had a very mature group – I won’t call them old – but this is a different role for me being a veteran in the locker room.”

Green is a 6-foot-6, 215-pound shooting guard who has averaged 8.8 points, and 3.6 rebounds a game over his career. For the past six summers, he has been a councillor at Olympia Sports Camp in Huntsville, Ont., teaching basketball to kids. He spent time in Los Angeles this summer with Toronto’s young players, to learn the team’s system.

Green also has his own podcast called In The Green Room where he talks about his pets, travels, teammates and his recovery last year from a groin injury. He even recorded a recent episode in Halifax.

“Whenever we tape somewhere, I plan for Danny to do like 5-10 minutes of meeting people after, and Danny always turns it into 30 minutes, insisting on stretching it out to talk to as many people as he can,” said Harrison Sanford, his co-host on the podcast. “Danny and I both have younger brothers, and you can see it in the way Danny interacts with people. He plays a brotherly role, knowing the example he’s setting.”

When reporters were prodding Ujiri and Leonard to find out what the team is doing to sell the superstar on Toronto, Green interjected with a well-timed joke about the team’s special Drake-themed threads.

“It was the OVO jerseys that sold me,” he said.

Green is a New Yorker, and played for a prominent basketball program at St. Mary’s High School, where he was a McDonald’s All-American. He often played in camps and AAU tournaments against his new Raptors teammate Kyle Lowry, who grew up playing in nearby Philadelphia.

“I’ve known and played against Kyle since high-school days and he’s always been a bull,” Green said. “He’s great at what he does; he knows how to get guys involved and he knows how to make his teammates better.”

“Me and Danny go back a long time,” Lowry said. “Played lots against him but never had the opportunity to play with him.”

Green was a starter on UNC’s 2009 national championship team, then a second-round draft pick of the Cleveland Cavaliers – 46th over all. He played a handful of games in one season there, then eight in San Antonio – interrupted by stints with the Reno Bighorns of the NBA Development League and a spell in the Slovenian League during the NBA lockout.

Green earned his minutes in San Antonio by thriving in big defensive assignments. He eventually became a starter for the Spurs. Being asked to talk about Green produced perhaps Leonard’s most thoughtful answer on Monday.

“He’s a competitor on both ends of the floor and wants to shut down his man when he’s guarding him. He’s also very smart, sees things before they come,” Leonard said. “It gives you more confidence knowing that guys see the same things on the floor. Just having a familiar face here is great.”

LeBron James says Lakers have ‘a long way to go to get to Golden State’
Subscriber content
September 24, 2018 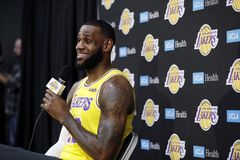 ‘I came here with an open mind’: Kawhi Leonard talks about trade to Raptors
September 24, 2018 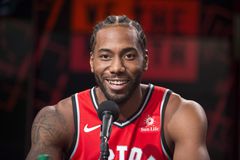 Opinion
Kawhi Leonard’s continued silence speaks volumes about his approach to Raptors – and to Toronto
September 21, 2018 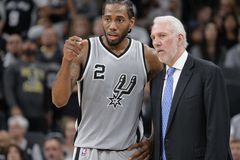