By storming out to an NBA-leading 18-4 record, the Toronto Raptors look like a favourite to win the Eastern Conference. Now, with that early-season excitement percolating, they get a chance to test their mettle against the reigning NBA champs.

The 15-7 Golden State Warriors visit Toronto on Thursday for the league’s marquee game of the night. It’s the first of two regular-season meetings between the clubs. Many believe the Raptors will be the last team standing in the Dubs’ path in June as they chase after their fourth NBA title in five years. Warriors sharpshooter Klay Thompson didn’t mind stoking that possibility earlier this week after facing the Cleveand Cavaliers in the past four Finals.

“Right now they’re the best, and I expect them to be there throughout the whole season,” Thompson told reporters in Oakland on Monday when asked about the Raptors.

“They’ve got tremendous length and so many two-way players. Obviously Kawhi [Leonard] is back and playing at an MVP level. Kyle Lowry is a great leader, as well as a bulldog out there. So it’s going to be a great test for us. Who knows, it might be a preview of June. They’ve got something really special up there in Canada right now.”

A little smile crept across Raptor Fred VanVleet’s face when he was asked on Wednesday how he felt about Thompson suggesting the two teams could meet in the Finals.

“Obviously much respect to the group they’ve got there, and Klay is probably one of the deadliest guys in the league, so it’s funny when guys who are that cold blooded on the court make nice comments,” VanVleet said. “They are established as champions, and it’s our job to knock them down. But we have a lot of work to do between now until then.”

The Warriors have beat the Raptors in eight straight meetings dating back to 2014, including four in Toronto and 18 of the past 23. Five of the most recent six losses to Golden State, though, were decided by two possessions.

Broadcasters from TNT will naturally be courtside in Toronto, showing the big game between the two clubs with the highest win totals in the league.

The Warriors, who have appeared invincible in recent seasons, look human right now. They’ve been missing two-time MVP Stephen Curry and all-star Draymond Green to injuries. There has been in-fighting between Green and Kevin Durant. They’ve lost their past four road games, something they had not done since Feb. 26, 2013.

Despite all that, Golden State still finds itself sitting in second place atop the Western Conference, behind only the 13-6 L.A. Clippers. The Raptors won’t be expecting a vulnerable opponent.

“People are trying to do what they do, but nobody does it like them,” Raptors head coach Nick Nurse said, elaborating on Golden State’s ability to hit a flurry of deep three-pointers to bury opponents in a hole most can’t overcome.

“That spirit it takes away from you, the discouragement of playing so hard and well, and you turn around and they throw in another 30-footer. You can see every team shaking their head like they just got punched off the ropes and they’re trying to stay in the fight,” Nurse said. “Hopefully, mentally, we’ll be strong enough to deal with that because it’s coming. You’re just going to have to take that little run of three or four threes that they make, and keep on playing.”

“He’s one of the best players in the NBA, he’s going to be in history,” Leonard said of Durant. “Just going out there and playing that team, and knowing what they did the last three years, it’s always a great match-up to go out and play a competitive game, and that’s all you want playing in this league.”

The Raps are in the midst of a six-game win streak. The latest was a come-from-behind victory in Memphis on Tuesday night, in which the Raptors needed a blunt halftime gut-check after allowing the Grizzlies 71 first-half points.

The Raps know they can’t afford many sloppy defensive minutes like that against Golden State. 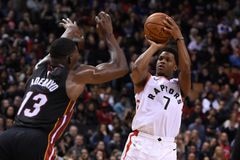 Kawhi Leonard does the heavy lifting in Toronto Raptors' 125-107 victory over Wizards
November 24, 2018 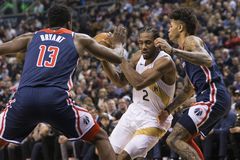 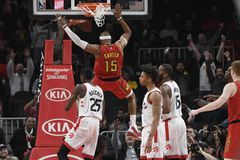