After a gutsy victory before a raucous Milwaukee crowd, the Toronto Raptors sit just one victory away from their first-ever trip to the NBA Finals.

Kawhi Leonard had 35 points and a new personal-best nine assists. Fred Van Vleet scored a career-high 21 – including seven three-pointers – as the Raptors bounced back in a game they once trailed by as much as 14, and stole a 105-99 Game 5 victory over the No.1-seeded Bucks.

It was Toronto’s third straight win in the Eastern Conference Finals – a series they began with two straight losses. The Raps can seize a spot in the Finals versus the reigning champion Golden State Warriors with a win in Toronto on Saturday.

“I’ve been here before, I’ve been to the Finals, and there’s pretty much nothing new out there I’m seeing. We’ve just got to have fun with it, enjoy it,” said Leonard. “Like I told ‘em tonight when we were down 10, I told ‘em to enjoy the moment and embrace it, and let’s have fun and love it. This is why we’re here.”

Things looked shaky for the Raptors off the tip. Siakam picked up two fouls in the first 90 seconds and subbed out for Norman Powell. Toronto had three careless turnovers, and the Bucks sped out to a 16-4 lead.

Not to be outdone by Drake’s courtside presence in Toronto, the jumbotron in Milwaukee flashed early to a some popular Green Bay Packers at Thursday’s game. Hulking Offensive Lineman David Bakhtiari chugged two beers to roaring applause from the sports-mad Wisconsinites, then challenged quarterback Aaron Rodgers to do the same.

Milwaukee Brewers star outfielder Christian Yelich attended too, and he’d be guzzling suds also before the night was over. The fans were amped, and the MVP chants for Antetokounmpo, their Greek superstar, started early.

Bledsoe and Brogdon were rolling early for Milwaukee. Leonard looked fresher than he had in Game 4, and had even declined his coach’s invitation to skip morning shoot-around to get some extra rest. Powell too provided a scoring burst for the Raps, but the Bucks still held a hefty 32-22 lead as the first quarter closed.

The Raps mounted a big run in the second quarter to tie the game. Siakam was huge – seizing eight rebounds and scoring eight points in the quarter while Leonard played playmaker. Lowry was scoring big too, despite still being hampered by an injured left thumb. The All-Star point guard arrived at morning shoot-around with a large blue glove on the distressed left hand – one that looked like a big blue quilted oven mitt with no fingertips. He’s in pain, Lowry admitted, but he’ll deal with it when the season ends.

Leonard and Siakam each had a pair of fouls, and Lowry had three, still they played on. The Bucks took a slim 49-46 lead into half-time.

Outdoors, thousands more Bucks fans gathered in the plaza called Deer District that surrounds their brand-new stadium Fiserv Forum. TNT was broadcasting live in the heart of the bellowing crowd.

Right beside the modern new venue, the old Harris Bradley Center is still in mid-demolition, its beams and collapsing stairwells exposed in piles of falling grey bricks and cement. The building where the Raptors eliminated the Bucks in 2017 is nearly a distant memory.

Inside, the Bucks re-constructed another confident 10-point lead inside the third quarter. The lanky Greek standout drove and dunked and flexed his muscles, and each time his fans hollered along to the stadium announcer’s loud, deep drawn-out shouting of “ANTE-TO-KOOOOOUNM-PO!”

Van Vleet willed in a slew of three-pointers to chip away at the lead in what would be a monster second half for him. It was the reserve point guard’s second hot game in a row after he’d begun the series shooting poorly, but was jump-started during an emotional past few days. He suffered an eye injury for which he still has stitches, and his girlfriend delivered their newborn baby son Fred Jr. on Monday a few weeks early. The arrival of their second child prompted Van Vleet to make some speedy between-games visits to them in Rockford, Ill.

“That’s the formula. Zero sleep, have lots of babies,” said Van Vleet after the game. “In the middle of all that stuff, you guys know it’s been a rough playoff stretch shooting the ball for me, so keep, just trusting the work and trusting your craft and knowing that at some point they’re going to drop. A lot of times, how it works, they all come at once and I think that’s what you’ve seen.”

Leonard pumped in seven points, and Milwaukee fans taunted him with chants of “FUTURE CLIPPER”. The Raps trailed 75-72 entering the final quarter, and the Bucks mascot in his leather jacket tore across the gym floor on a Harley Davidson to kick it off.

The Raptors megastar exploded in the fourth – scoring 15 points, and finishing out a seven-rebound night. Again his defence on Antetokounmpo was stout. Marc Gasol came through with his first points of the game when his team needed it most, part of his four-point, 1-of-6 shooting night.

The two teams traded baskets and remained a few points apart in a heart-thumping quarter, but Leonard was the game’s shining star.

“They’re sending two or three bodies at Kawhi and he’s making the right passes, and we made some shots for him tonight,” said Lowry. “His game tonight –35-9-7 – that’s a pretty big game, on the road. That’s a superstar.”

Lowry would stick around the floor when the game ended to share a moment with Van Vleet, congratulating his fellow point guard on his huge performance.

“To come out with a performance like that on the road shows his mental toughness and how much of a professional he is,” Lowry said.

Game 6 is slated for 8:30 pm Saturday in Toronto, and Game 7 would be Monday in Milwaukee.

It will be the first time the Bucks have faced an elimination game this postseason.

“We talk about the character of the group and the toughness and competitiveness of the group. It’s first of four,” said Bucks Coach Mike Budenholzer. “We’ve got to go to Toronto, get a game, and I think the group will be ready.”

Nothing to be done about Toronto Raptors’ Kyle Lowry’s thumb until off-season
May 23, 2019 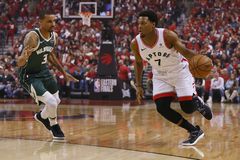