Despite a franchise-record 59 wins, last season was a failure for the Toronto Raptors.

Another postseason expulsion at the hands of LeBron James and the Cleveland Cavaliers – in four straight games in the Eastern Conference semi-final – saw to that.

Those circumstances forced Raptors president Masai Ujiri to rethink his hand, and he did not like the cards he was holding.

First out the door was head coach Dwane Casey, but the boldest move was yet to come.

In July, Ujiri did the unthinkable – trading franchise favourite DeMar DeRozan to the San Antonio Spurs, along with up-and-coming talent Jakob Poeltl and a first-round draft pick in 2019.

That move elevated the Raptors from Eastern Conference pretenders to legitimate challengers with a chance to advance into the NBA finals for the first time.

But the risks are high: Does Leonard, who can head into free agency at the end of the season, want to stay in Toronto, or ultimately go to his home town of Los Angeles?

Famously reticent when it comes to dealing with the media, Leonard has done little to dispel the rumours, remaining mum on the trade until he arrived in Toronto for media day last month.

Even then he did not reveal much about his plans, apart from insisting he wants to play in Toronto. “I came with an open mind,” he said. “I want to do great things … focus on this year.”

That year begins on Wednesday in Toronto when the Raptors open the regular-season at Scotiabank Arena against the Cavaliers.

Out with the old

The 29-year-old had spent his entire nine-year career in Toronto and had evolved from an awkward rookie to become the face of the franchise. He departs as arguably the greatest Raptor in history – a four-time all-star and the franchise’s leader in points scored (13,296, not including playoffs). DeRozan is undoubtedly an NBA star, but a flawed one, as was evident during last year’s playoff exit to the Cavaliers where his defensive liabilities were consistently exposed. He could not get off the bench in Game 3 for the final 14-plus minutes of the game, which the Cavaliers won by two. At his best offensively when attacking the basket, DeRozan had made strides to improve his perimeter shooting, attempting a career-high 287 shots from three-point range last season. He connected on 31.2 per cent, but in the league context, among regulars who made at least 280 three-point attempts, that success rate ranked him third-worst – 97th out of top 100 players listed.

The coach with the most wins in franchise history with a record of 320-238 over a seven-year span, Casey led the team to a record 59 wins last season and was chosen as the coach of the year, but was fired after Toronto was swept by Cleveland. While he led the Raptors into the playoffs the past five years, his success there was muted – 21-30 over all, with the team winning just four of nine postseason series. Casey is still highly regarded as one of the NBA’s top coaches and he did not stay unemployed for long. About a month after he was let go in Toronto, he signed a five-year contract as head coach of the Detroit Pistons.

A casualty of the Leonard trade, Poeltl was an integral part – along with Pascal Siakam and Fred VanVleet – of what was the NBA’s best bench unit last season. A seven-footer who usually came on in place of starter Jonas Valanciunas at centre, Poeltl displayed subtle moves beneath the basket and was an underrated passer. San Antonio obviously thinks highly of him. Even before the 22-year-old donned a Spurs uniform, the club opted to pick up his fourth-year option.​

In with the new

The Raptors rocked the NBA during the off-season with one of the league’s most surprising moves, swinging the deal with the Spurs that landed them this top-five league talent. The 6-foot-7, 230-pound enigmatic forward can do it all at both ends of the court: on defence, locking down the opposing team’s top player; or on offence with the ability to drive to the basket or score from the perimeter. In his last healthy season two years ago, Leonard averaged 25.5 points, 5.8 rebounds and 3.5 assists while averaging a robust 33.4 minutes of playing time. Entering his eighth NBA season, Leonard is in his prime. He is a former two-time defensive player of the year and was selected as the NBA finals’ most valuable player when he led the San Antonio Spurs to the title in 2014.

Another piece in the Spurs trade, Green is a confidant of Leonard and a solid player in his own right. He is an upgrade who should help the Raptors. A 6-foot-6 shooting guard, Green is a proficient outside threat, with a career 39.5-per-cent success rate when launching the three-pointer. He is also an impact defender. He can guard multiple positions, which fits in nicely with the Raptors desire for more versatility this season.

Nurse is the Raptors' first new head coach in seven years. He was an assistant under Casey for five years and will continue to emphasize the three-point attack, which has taken the league by storm. The 50-year-old oversaw the Toronto offence last season and the Raptors were among the league’s top offensive units thanks to a new emphasis on a long-range attack. The Raptors attempted a franchise-record 2,705 shots from three-point territory, the third-highest total in the NBA and a 35-per-cent increase from the previous year. You can expect those numbers to rise, especially with Leonard and Green in the fold.

Nurse has not confirmed who his starting five might be. And he’s hinted that it might be a rotating cast. “I just want to create maybe a little more freedom that we could make changes along the way just on feel, rest time, matchups,” he said recently. This is one of the deepest Raptors roster in team history and Nurse believes he can move players in and out of the starting rotation depending on matchups without affecting the team’s chances.

Players who will vie for starting minutes

Kyle Lowry: Point guard. The longest-tenured Raptor now that teammate and close friend DeRozan has moved on, the 32-year-old is still undeniably the king of the Toronto backcourt.

Danny Green: Shooting guard. Newcomer steps in and should establish a presence at both ends of the court.

Kawhi Leonard: Forward/power forward. His addition provides the Raptors with a legitimate most-valuable-player candidate as one of the league’s best two-way performers.

Jonas Valanciunas: Centre. The 7-foot big man has added the three-pointer to his arsenal and will likely be Toronto’s starting man in the middle most games.

Serge Ibaka: Power forward/centre. Will probably be a power forward when Valanciunas lines up at centre, but can easily slide into the middle spot when necessary.

OG Anunoby: Power forward/forward. Looking to build on a solid rookie campaign in which he started 62 games.

The East is for the taking

With the Raptors' personal roadblock, LeBron James, playing in Los Angeles, the time has never been better for the team to challenge for the Eastern Conference title. For the past three postseasons running, the Raptors have run into Cleveland and the James juggernaut and lost each time. Last year it was especially galling given that the Raptors compiled the best record in the conference. But the road through the East will still be tough with the likes of the Boston Celtics and Philadelphia 76ers also seemingly ready to take that next step.​

Kyle Lowry: Will he play or will he pout?

Lowry was not the happiest camper when his long-time backcourt partner and good friend DeRozan was traded. But in a career now entering its 13th season, Lowry likely understands better than most that the acquisition of Leonard puts him one step closer to the ultimate goal – a league championship. Lowry, with four-straight all-star appearances, is still regarded as one of the game’s most tenacious point guards. But he has a lot of mileage on those wheels and he will have to prove, once again, he is still up to the task. Last season, with Toronto’s strong bench play playing a factor, Lowry’s average minutes a game (32.2) fell. His average scoring (16.2 points) dipped to levels not seen since his first year with the club. ​ 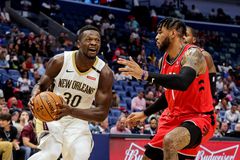 With LeBron James gone, the Eastern Conference is set for a new champion Subscriber content
October 11, 2018 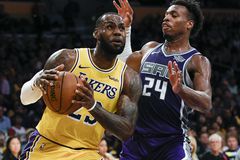 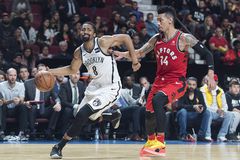