Undrafted rookie Terence Davis was snubbed for the Rising Stars Challenge at the NBA’s all-star weekend, and he performed like a player scorned in the Toronto Raptors’ victory on Sunday.

Davis scored a career-high 31 points – including six three-pointers – to steer the Raptors toward a 129-102 win over the visiting Chicago Bulls. The 22-year-old Ole Miss product shot 12-of-15 from the field – and 6-of-7 from deep – and contributed four rebounds and an assist.

It came two days after he reacted on Twitter to being left off the list of the best first- and second-year NBA players chosen for an exhibition game as part of the all-star festivities in Chicago.

“This isn’t my first time not being selected for something but I guess it’s easy going undrafted to playing quality mins on a championship team huh #MakeEmBelieve” Davis wrote on Twitter.

The 22-year-old said after the game that the snub served as motivation.

“It definitely was on in the back of my mind for sure throughout the course of the season,” Davis said. “But I’d rather play in the playoffs.”

Despite the lopsided final score, the game was close until midway through the third.

The Raps lost brief control of the lead in the opening quarter. That was because of their seven early turnovers on careless passes and weak hands on the ball.

Back-to-back buckets by Boucher off the bench late in the quarter gave the Raps back the lead. They went into the second quarter ahead just barely, 32-29.

The Raptors got their turnovers under control in the second quarter, but allowed the Bulls to drain seven three-pointers. Chicago led 63-60 at halftime.

Toronto was without Norman Powell, who is out indefinitely after suffering a fracture in his left hand late in Friday’s victory over the Detroit Pistons. Marc Gasol (left hamstring tightness) missed his third straight game, while Rondae Hollis-Jefferson (sprained right ankle) was sidelined for his fourth in a row.

Toronto outscored Chicago 17-7 to open the second half. Ibaka went on a fast eight-point scoring tear, dominating with jumpers and dunks. He also ruthlessly blocked a shot from Chandler Hutchison and catapulted the ball deep into the crowd. Davis kept pitching in with buckets, too, and the home team built up a 10-point lead – the biggest of the game to that point.

Davis and Patrick McCaw hit back-to-back three-pointers in the opening 90 seconds of the fourth quarter as the game began to get lopsided.

Davis was unguardable down the stretch as he exploded for 13 fourth-quarter points. He took opponents off the dribble, got to the rim, pulled down rebounds and was in an absolute zone from beyond the arc.

“I think he’s got a shooting component that’s pretty high level," Toronto coach Nick Nurse said. "You see it a little bit on a night like tonight and that’s usually the toughest component to get in this league. There’s lots of other areas of the game that he can improve on and will improve on.”

When Davis drained his sixth three-pointer, the Bulls hollered for a desperate timeout and every Raptor on the bench sprinted onto the floor to hug the youngster.

“It felt really good, and it just shows you what type of team this is,” Davis said, as rookie teammate Dewan Hernandez heckled and used a phone to record him in the media scrum. “We all love each other and care for each other, and I wouldn’t want to be anywhere else.”

The Raptors improved to 36-14, in second place in the Eastern Conference below the Milwaukee Bucks. The Bulls (19-33) are in ninth place, just outside of a playoff spot.

Toronto has five games remaining until the all-star break. It plays the Indiana Pacers twice this week – Wednesday at home and Friday in Indianapolis. 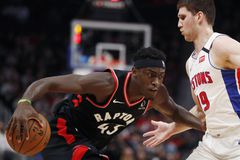 The night Kobe Bryant went off for 81 points against the Raptors
January 31, 2020 Kyle Lowry says he was pushed by fan after diving into stands in Cleveland
January 31, 2020 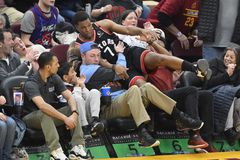