The Toronto Raptors strengthened their grip on the top playoff seed in the Eastern Conference with a bounce-back victory over the second-place Boston Celtics on Wednesday night in their final meeting of the regular season.

Toronto snapped a two-game losing skid with the 96-78 win, and evened the season series with Boston 2-2. That puts the Raptors ahead by three games in the standings with just four games left, bolstering their chances of earning home-court advantage through the conference finals.

DeMar DeRozan lead the way with 16 points, while Serge Ibaka and Fred VanVleet each added 15 points, and Kyle Lowry contributed 13.

It wasn’t a playoff game, but it had that sort of feel. Two games separated the first-place Raptors and the second-place Celtics atop the Eastern Conference standings with a week left in the regular season. Air Canada Centre was lively, ESPN duo Doris Burke and Mike Breen were courtside, broadcasting the game across the United States, and, yes, Drake was in attendance.

The game was missing some star power, with Kyrie Irving sidelined until the playoffs following knee surgery.

The Raptors were fresh off a loss in Cleveland the night before, where they had hardly looked like the top playoff seed against the third-place Cavaliers. Now they were facing the Celtics for the second time in five days, after suffering a loss in Boston on Saturday to a squad that hadn’t even been at full strength.

After winning 11 straight in early March, the Raptors had lost five of eight and instead of getting stronger as the playoffs neared, they appeared to be way out of sorts. Toronto had been fifth in the NBA in defensive rating, but during the span of those eight games, they were dead last. They re-dedicated Wednesday to defensive focus.

Both teams opened Wednesday’s game looking sluggish from their road games the previous night, misfiring on countless shots. But the Raptors fared worse early on, hitting just six of 23 shots for their lowest first-quarter scoring total of the season. They ended the abysmal quarter trailing 20-14.

The Raptors tinkered with the typical rotation in search of a defensive spark. Norman Powell was the first man off the bench, and was given spurts throughout the night. They called upon little-used seven-footer Lucas Nogueira for big stretches to help tame Boston big men Greg Monroe and Al Horford.

The Raptors battled back in the second quarter. A superb stint from Delon Wright was key. The youngster was all over the court while playing the entire quarter, providing six points. He finished the game with eight points, nine rebounds and eight assists. The Raptors’ shooting improved, they turned Boston over nine times in the quarter and converted those into 17 points, on their way to outscoring the Celtics 29-11 in the quarter to take a 43-33 halftime lead.

The personnel changes made a big difference.

“It changed the game,” said Dwane Casey. “You’re looking for five guys who are going to compete and we did. It was a team effort, those guys came in and kind of changed things but everyone had their contributions tonight at some point.”

The Raptors remained in command as the Celtics struggled to hit shots. Marcus Morris led the Boston scoring with 21 points while Monroe added 17, and Horford had 16, as Boston, 53-25, shot a surprising 33 per cent.

Lowry looked a little better than he had the previous night. Toronto’s all-star point guard had been criticized for shooting 2-of-11 in the Raptors’ loss in Cleveland after spending a late-night trip back from Houston after watching his alma mater Villanova win an NCAA national title. Wednesday, he made 5 of 11, added five rebounds and five assists.

Casey was still disgruntled about his Raptors not getting to the free throw line enough (they shot just eight to Boston’s 28). He loved the team’s attention to detail, especially on defence, and Powell’s toughness (even though he was 0-for-4 from the field, he contributed five rebounds, a steal and hustle defence.)

That’s win No. 32 at Air Canada Centre this year, which matches the club’s single-season record for home victories.

Toronto has four games left in the regular season – against Indiana, Orlando, Detroit and Miami. The playoffs begin April 14.

“To be a good team, that’s how you’ve got to respond,” said DeRozan. “When you have game like we had last night, to be able to understand and just tighten up our mistakes and come out the next night and handle business.” 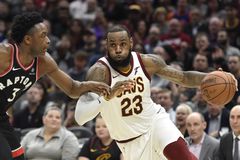 Slumping Raptors must tune defence to get back on track
March 30, 2018 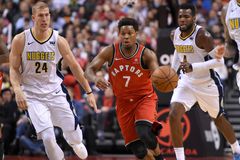