There was a meeting of the mutual-admiration society – basketball chapter – in Toronto on Friday when the Boston Celtics squared off against the Raptors at Scotiabank Arena.

It was only the second game of the NBA season for both teams so the animosity has not yet had a chance to develop naturally yet.

Give it time, it will come.

In a game featuring the two teams many anticipate will be battling it out all year for eventual supremacy in the Eastern Conference, it was the Raptors who earned early bragging rights, hanging on for a 113-101 win.

The game was ragged in the early goings with plenty of whistles by sensitive officials. But it picked up for some crowd-pleasing intensity by the time the fourth quarter rolled around, with the Raptors clinging to an 82-79 lead.

A mid-range jumper by Kawhi Leonard with about 3 1/2 minutes to go provided the Toronto with a 101-96 bulge, a lead that it was able to nurse over the finish line.

Leonard, the team’s superstar newcomer who was serenaded on a couple of occasions with chants of “MVP, MVP” by an adoring hometown crowd, finished with 31 points off 10-of-25 shooting and 10 rebounds.

“He’s just a special talent, so for us going down the stretch and playing them again, we will be a lot kore prepared,” vowed Boston point guard Kyrie Irving, who led the Celtics with 21 points.

Back-to-back three-pointers by Green and then Lowry sealed the win as Toronto exploded on a 10-0 run that brought an ecstatic sold-out gathering to its feet in wild applause.

Serge Ibaka also enjoyed a solid night, with 21 points on 10-of-14 from the floor with six rebounds.

“There’s a heck of a lot of polishing up to do and learning each other and getting the spacing right and that kind of stuff,” Toronto head coach Nick Nurse said. “Hopefully we can react a little bit better; if they’re going to take that away with a double team we have to find the open man or cut to the basket or the kick and swing around.”

Heading into the game, the two conference foes served up nothing but platitudes when it came to referencing each other.

“Really well coached, very cohesive, great chemistry – and a lot of talent,” raved Brad Stevens, the Boston coach. “Like, those guys are good, all the way down the line.

“Everybody talks about all the teams that have drafted well. I mean, Toronto’s got to be up there with anybody when you consider all the guys that they have drafted and undrafted that are making huge, huge contributions.”

“They’re versatile, that’s for sure,” Nurse said. “I think that’s one of the many things that’s made them so good. So we’re trying to get there.”

The Raptors have owned Boston on its home court of late, winning nine of their past 10 meetings that have been played in Toronto heading into Friday’s game.

“Does anybody have a good record in here, that would be my first question?” Stevens said when asked about the disparity. “It’s a hard place to play.”

The Raptors, who keep on emphasizing that versatility will be one of their hallmarks this season, inserted Serge Ibaka into the starting lineup at centre in place of Jonas Valanciunas.

The move to inject a little more speed into the starting five was to try to combat the effectiveness of Boston starting centre Al Horford, who has the ability to score inside and out.

Otherwise, it was the same lineup – Ibaka joined Kyle Lowry, Danny Green, Kawhi Leonard and Pascal Siakam for the opening tip – that started in Wednesday’s season-opener against the Cleveland Cavaliers, a 116-104 Toronto victory.

Toronto forward OG Anunoby, who had to leave Wednesday’s game in the second half after suffering an orbital bone contusion, was available for Friday’s game, outfitted with a pair of heavy-duty protective goggles.

“We were joking around about that [on Thursday],” Nurse said. “We were saying, ‘Are you going with Rambis or Kareem or Horace Grant?’ And he said, ‘None of those. I’ve got to get some good ones.’ ”

The goggles would not last for long with Anunoby ditching them late in the opening quarter where the Celtics pulled into a 25-18 lead. Nurse provided playing time to 10 of his players in the opening frame.

Ragged play abounded in the second quarter as the offences for both teams struggled to get into a rhythm. The Celtics surged into a seven-point lead at one point but the Raptors, with a buzzer-beating three by Fred VanVleet, cut that margin to 53-49 by the half.

The pace livened in the third and a Green three followed up by a Leonard dunk on a nice setup by Lowry powered the Raptors in front 71-69.

Toronto carried an 82-79 lead into the fourth. 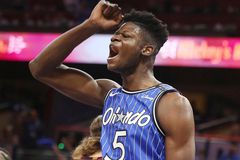 Celtics' visit could be an early-season statement game 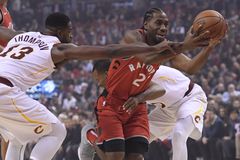 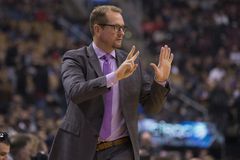