Blake Snell turned away from his manager and yelled an expletive as Kevin Cash headed to the mound. In control all night, the Tampa Bay ace no longer had the ball in his potent left hand.

Soon, the Rays no longer had a grip on the lead, either.

The team that reached the World Series leaning largely on analytics was undone by the data – and a decision sure to become part of October lore.

With Snell still seething, wobbly reliever Nick Anderson was on the mound when Mookie Betts’ double started a sequence that led to two quick runs as the Los Angeles Dodgers rallied for a championship-clinching 3-1 victory in Game 6 on Tuesday night.

“I guess I regret it because it didn’t work out,” Cash said, later adding, “personally, I thought Blake had done his job and then some.”

Said Snell: “At the end of the day, I see both sides.”

“The hardest thing for me is I was rolling, I was in a groove. I felt like I had them guessing. It’s just tough for me. It’s going to be tough for me to accept that. I really don’t know to look at it. However you look at it, we lost.”

The Rays’ pitching philosophy focuses on not allowing starters to face hitters for a third time in a game, and Snell has gotten in trouble when he’s stuck around too long. But the 2018 AL Cy Young Award winner was dominant this time, and steaming when he handed the ball to Cash, regarded as one of the bright, young minds in the majors.

“I totally respect and understand the questions that come with it. Blake gave us every opportunity to win. He was outstanding. They’re not easy decisions. I didn’t want Mookie and (Corey) Seager seeing Blake a third time,” Cash said.

While Anderson was warming up, the baseball world was heating up to skewer Cash.

From the harsh words of New York Mets ace Noah Syndergaard to the more measured reaction of long-time reliever Jerry Blevins, the sentiment was the same.

“So who gets to pull the manager?” Syndergaard tweeted.

“You manage a baseball game with your EYES, HEART, & GUT as well as your BRAIN,” Blevins posted.

Some older sluggers weighed in as well, such as Hall of Famer Frank Thomas.

“Another Analytical Meltdown!! Total Disaster for Tampa,” Thomas wrote. “Blake Snell was your only chance of winning a tight game tonight.”

Why pull your best pitcher with a reasonable pitch count, nine strikeouts and just two hits simply because it’s about to be the third time through the order?

“I’m not exactly sure why. I’m not going to ask any questions, but he was pitching a great game,” Betts said.

“It was kind of like a sigh of relief,” Betts said. “Had he stayed in the game, he might have pitched a complete game. It was the Cy Young Snell that pitched tonight.”

Count Dodgers manager Dave Roberts, himself a frequent target for criticism over pulling starters, among those happy to see Snell go.

“Mookie looked at me with a little smile, and we were all just excited that Snell was out of the game,” Roberts said.

Barnes, the No. 9 hitter, singled on Snell’s 73rd pitch with one out in the sixth when Cash made the same decision he has so many times in the fifth or sixth inning.

The sixth-year skipper turned it over to a bullpen that set a major league record with 12 different pitchers recording saves, despite just a 60-game schedule reduced by the pandemic.

Anderson was the best of them all in the regular season, allowing five hits and one earned run in 16 1/3 innings over 19 outings. But the tall right-hander – who came from Miami at the trading deadline last year in one of several shrewd deals that made the Rays who they are – has been ordinary in the post-season.

Anderson allowed a run in his seventh consecutive appearance going back to Game 5 of the AL Division Series, a 2-1 win over the Yankees that sent Tampa Bay to the ALCS.

“I thought it was Blake’s game to lose,” Rays centrefielder Kevin Kiermaier said. “I had a great seat in centre field in watching how he was striking everybody out. He had everything going. It was an unfortunate way to see it end.

“Kevin Cash, our front office, they put together a certain game plan and they’ve been right time and time again. We did what we did and it didn’t work out,” he said.

After the double by Betts down the line in left, Barnes scored on a wild pitch by Anderson that also sent Betts to third. Seager hit a grounder to Ji-Man Choi playing in at first base, but Betts made the instinctive play and took off for home, beating the throw with a headfirst slide.

“The way Cash manages and does his thing, it got us here,” Anderson said. “Try to be as ready as possible when my name is called. I’ll take the heat for not holding my end on this kind of playoff stretch.”

Betts hit a solo homer off Pete Fairbanks in the eighth inning to give a LA a little breathing room, and the Rays only had one more baserunner – No. 9 hitter Mike Zunino’s single in the seventh – after Cash’s fateful move.

“I feel like the thought process was right. Every decision’s that made, that end result has a pretty weighing factor in how you feel about it,” Cash said. 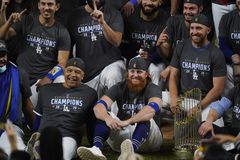 Seager doubles down as World Series and LCS MVP
October 28, 2020 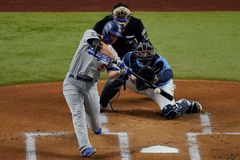