Kyle Lowry called it a wasted year. DeMar DeRozan said it was the worst feeling he’s had in his nine NBA seasons.

Toronto Raptors players did their exit interviews on Tuesday, entering an off-season full of uncertainty after being swept out of the playoffs by LeBron James and the Cleveland Cavaliers once again. They were frustrated and perplexed, reaching for explanations.

The Raptors had completely changed their offence, won a franchise-record 59 games, seized the No. 1 seed in the Eastern Conference playoffs and envisioned playing into June. Yet, the result was the same as last year: a second-round sweeping at the hands of the Cavaliers.

“Yep, it’s a wasted year for me,” Lowry said. “For me, it was championship or bust.”

This one was much tougher to swallow , the Raptors’ all-star point guard said. “It does feel a lot different because we felt we could possibly make the NBA finals,” he said. “That’s always been a real goal for us. That’s the only thing that matters.”

His all-star back-court mate said losing to James and the Cavs three years running feels like repeatedly getting a flat tire on the same speed bump. He had been confident the Raps were better built this time and had a more effective style of play.

“Yeah, by far for me, my nine years being in the league, this is probably the toughest, most frustrating, difficult, lowest feeling I’ve had,” DeRozan said. “When you get knocked down so many times, you build up this frustration that you want to withstand anything. You get to that point to where you stand firm through everything and you feel like you can’t get knocked down again, and then you realize you do get knocked down again.”

Now, tough questions must be answered. Should the coach be fired? Should the franchise disband the core or keep it together? The team did not bring Raptors president Masai Ujiri or head coach Dwane Casey to meet the media on Tuesday, but they’re expected to do so later this week.

Casey was considered a strong candidate for the NBA’s Coach of the Year award for the Raptors tremendous regular season. Both Lowry and DeRozan spoke very warmly of Casey but steered away from giving definitive opinions about the his future in Toronto.

DeRozan said he never gets involved in matters of team staffing, but praised his coach of seven seasons.

“A lot of my success, all of my success, I have to credit Casey,” he said. “No matter what, I’m always going to have the utmost respect when it comes to coach Casey, without a doubt.”

Reserve point guard Fred VanVleet admitted that pain in the shoulder he injured during the final regular season game nagged him throughout the playoffs. He said he’ll visit a shoulder specialist in New York next week and anticipates more rehab this off-season. He wants to spend time finding his shooting motions again and getting his shot back to where it was before the injury.

“I’ve been lying to myself for the last two, three weeks because I had plans on playing until June,” he said. “It was pain but it wasn’t enough to keep me from playing. It was just something that I was able to fight through and just try to go out there and battle. Obviously I wish I would have been full strength for this team and this organization.”

The Toronto bench, much lauded in the regular season, played many of their minutes versus opposing starters in the playoffs, VanVleet stressed – particularly against the Cavs, when James was on the floor a lot against the Raptors bench. While that may have been Cleveland’s attempt to keep Toronto’s talented young non-starters under control, it did limit the Bench Mob’s impact.

VanVleet is scheduled to become a free agent on July 1, as is third centre Lucas Nogueira.

“I love it here. This is the place that gave me a chance,” VanVleet said. “I’m a loyal guy. I always have been. Hopefully things work out.” 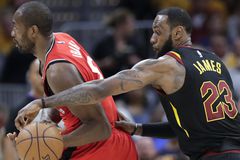 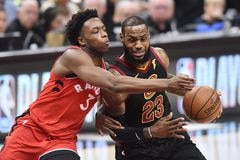 Durant scores 38 as Warriors down Pelicans to take commanding series lead
May 6, 2018 Opinion
Despite their stars, the Raptors’ playoff equation keeps yielding nothing
May 6, 2018 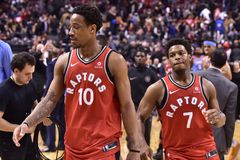